A little more than a decade ago, on April 20, 2010, an explosion on the Deepwater Horizon British Petroleum oil rig killed 11 workers and spilled over 130 million gallons of crude oil into the Gulf of Mexico. It was the biggest oil spill ever in U.S. waters and one of the worst environmental disasters anywhere ever.

We have to make sure it doesn’t happen again.

Last month month, Politico quoted multiple sources reporting that the Department of the Interior, which has been working on a plan to allow drilling in the eastern Gulf since 2018, intends to issue the plan after the November election but before President Donald Trump’s first term ends in January.

“Whatever is decided is expected to come out within two to three weeks of the election,” said one Politico source who had spoken to Interior officials recently because of the near-universal opposition to the plan among Florida elected officials.

But the opposition of Florida’s elected officials shouldn’t just delay drilling in the Gulf. It should kill it.

Oil Industry sources were positively drooling over the prospect of drilling. One industry insider dubbed the eastern Gulf the “golden trophy” and another called it “prize acreage” because it could produce oil within 10 years.

There are myriad reasons to oppose this plan.

Monroe County’s Recreation and tourism spending contributes $4.4 billion to Florida’s economy. Monroe County was ranked the fifth most valuable port in the nation for commercial fisherman with a 2014 dockside value of more than $100 million. The Florida Keys are home to the largest commercial fleet from Texas to North Carolina. Over 80% of the spiny lobster harvested in the state of Florida are caught in Monroe County, making fishing Monroe County’s second largest economic engine and employer next to tourism. Fishing employs over 4,500 Monroe county residents and tourism accounts for 54% of jobs.

By comparison, little of the profits and few of the directly employed workers in the drilling economy would likely flow to or hail from Monroe County.

Untold millions of fish, birds, sea turtles and marine mammals lost their lives in the Deepwater Horizon spill. For 87 days, the country watched helplessly as oil gushed into one of the world’s most biodiverse marine habitats. Many species, such as deep-sea coral, common loons, and spotted sea trout, have still not recovered a decade later.

Veterinarian Cynthia Smith of the National Marine Mammal Foundation told National Geographic Magazine that, “based on our science to date, if you were a marine mammal alive in the Gulf at the time of the spill, it doesn’t look good for you.”

As a former ocean engineering student and naval architecture major at New York Maritime College, and former Environmental Programs Manager for Key West, I can say for certain that, if the federal government is successful in engaging drilling in the eastern Gulf, and there’s a spill anywhere near the size of Deepwater Horizon, we will never put the genie back in the bottle. If there’s another similar environmental disaster in the eastern Gulf, most of us will live the rest of our lives with our environment, as well as our fishing and tourism industries a shadow of their former selves.

Florida and Monroe County officials need to act now, not wait until after the November elections. The Monroe County Commission should pass a resolution demanding that the Trump Administration enact a 99-year moratorium on drilling in the Gulf, beyond the current 2022 expiration date, so we don’t have to have political fire drills every four or eight years and can focus on other important issues. Every elected official should write the President to demand that he scrap plans for drilling in the Gulf and off our precious coast.

And any elected official not prepared to take a stand for the future of the Gulf should be prepared to pay a price for it in November. 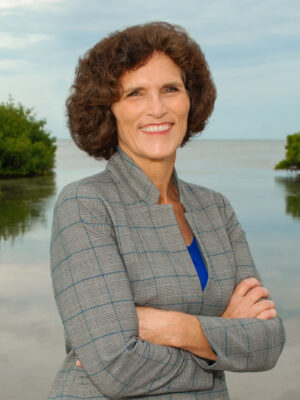 Annalise is a Licensed Professional Engineer with a Bachelor’s degree in Naval Architecture, and a Master’s degree in management. After graduating from NY Maritime College she held a USCG License as a Third Assistant Engineer, any Horsepower Steam or Motor Vessel, and was given a commission in the US Navy Reserve. She is a longtime civil servant, spending over 20 years at the City of Key West managing the Engineering, Stormwater and Environmental Program. She has held leadership roles in various community organizations dedicated to the environment, climate adaptation, wind-storm insurance rates, education and local youth. Annalise has owned her own engineering firm, working from Key Largo to Key West. Annalise is a Candidate for Monroe County Commission, District 1