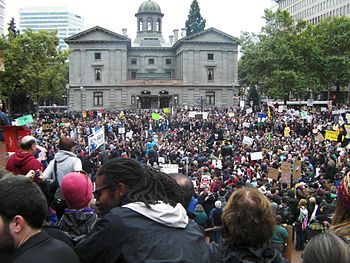 Ted Wheeler, the mayor of Portland, Oregon, wants to control who can say — and hear — what. He’s asked the federal government to cancel one permit and deny another, both for “alt-right” demonstrations at Portland’s Shrunk Plaza.

His excuse: Portland is “in mourning” and its “anger is real” over an incident in which an anti-Muslim bigot, Jeremy Joseph Christian, allegedly harassed two women on a commuter train and then stabbed three men who came to their defense, two of them fatally.

Not a bad excuse as excuses go, I guess, but no excuse can be allowed to trump our rights of free speech and peaceable assembly. On this matter, Mayor Wheeler is objectively taking the same position as Christian: The position that it is acceptable to use force to suppress ideas one disagrees with.

There are two metaphorical ways to describe a world in which various ideas compete for our attention and allegiance. Each of those metaphors has consequences.

Metaphor 1: A “marketplace of ideas” in which the best product wins out because it is sold with good arguments and people like it better. In this marketplace, any idea can be offered at any time by anyone who supports it. Hopefully the better ones get enough “market share” to be implemented; if an idea doesn’t work out, its supporters can move on to another.

Metaphor 2: A “war of ideas” in which things take a darker turn. The competing sides each conclude that their ideas cannot win out unless the alternatives are excluded not just from adoption, but from discussion and consideration. At some point, force inevitably becomes the instrument of that exclusion. The war ceases to be metaphorical. America is clearly at such a point now with the increasing frequency of riots and street fights over politics.

Even scarier than ad hoc riots and street fights, though, are calls by government officials for suppression of political speech through government permit schemes, police action to disperse demonstrators, etc.

The difference between Ted Wheeler and an “alt-right” agitator with a baseball bat is that Wheeler has a full-time police force, armed with lethal weaponry and effective legal immunity for its actions, at his beck and call.

We’ve seen societies in which the likes of Wheeler lay down a party line and the police break out their tear gas and truncheons to suppress all opposition to that line. For example, the Soviet Union, Italy, and Germany before, and eastern Europe after, World War Two.

I don’t want to live in such a society. Hopefully you don’t either. The events in question shouldn’t even require a permit — or the permission of Ted Wheeler. Freedom is our path away from the war and back to the marketplace.