In a press release dated March 25th, the Florida Keys Aqueduct Authority (FKAA) announced their decision to request funding from the Monroe County Commission to build a deep injection well at the Cudjoe regional wastewater treatment plant. Their decision was based on a preliminary report from Dr. Briceno of Florida International University who was conducting tests on the shallow wells for FKAA. According to the report, “a connection between injection depth and surface waters may exist at the injection site” (more detail below). When given these results, the FKAA board decided to exercise “an abundance of caution,” halt the test early and pursue the deep injection system. However, according to FKAA Executive Director Kirk Zuelch, initially, they will be moving forward with processing wastewater in the shallow well system, as it will take a year or two to build a deep injection well. 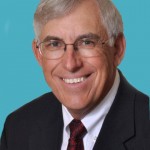 For several years community groups have been writing letters and protesting the existing plan to build a shallow injection well, culminating in several recent lawsuits. The focus of most of these criticisms has been the technology involved in the project. Opponents of shallow injection wells argue that the potential for the effluent to end up in the surrounding environment and cause significant damage to plants and animals in national refuge areas and national marine sanctuary waters is unacceptably high. Opponents of the grinder pump technology used in the system point to studies suggesting this type of pump is not designed for this implementation and object to the requirement that some local citizens must pay to have the pumps installed in their own yards. All groups have strenuously objected to the lack of proper review by federal environmental authorities to accurately determine the consequences of moving forward with the design currently in place.

The results of the study conducted by Dr. Briceno were not declared conclusive, but raised questions about the ability of the shallow injection well system to fully protect the environment. First, a baseline is established by taking samples from the areas to be tested. Then dye is injected into the wells, followed by an injection of fresh water meant to simulate wastewater. If the dye appears in the surface water, the test would show a confirmed, undeniable connection between the injection well and the aquifer. This did not happen, at least not exactly. 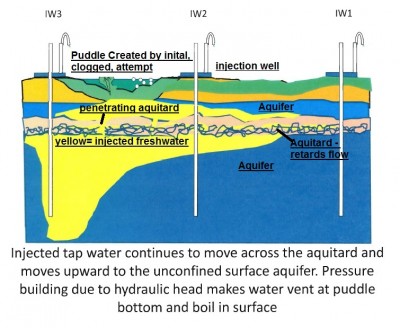 What definitively occurred was air bubbles rose to the surface of a nearby pool of water being observed for the dye test. This was the stated reason Dr. Briceno recommended, and the FKAA board requested funding for, a deep injection well. This particular surface puddle existed due to backflow from the initial attempt at testing which was blocked by garbage in the well. According to Tom Walker, Chief Engineer for FKAA, these bubbles may represent a connection wherein the freshwater they flushed into the system forced air, trapped beneath the surface in the aquifer, up to the surface. In the preliminary report, Dr. Briceno stated that “after 10 days…no significant dye concentration has been detected…except for some isolated higher readings…” Walker explained this as being a statistical 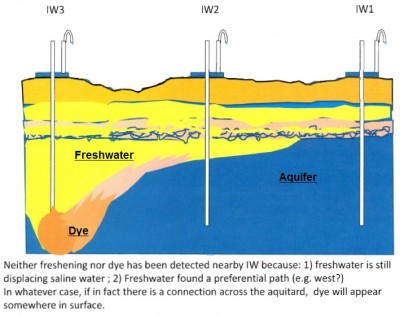 description contrasted against the pre-test levels: During the baseline test (pre-dye test levels), the water was discovered to have a “dye-like” substance already occurring. He further explained that, because this substance was not evenly distributed, there would be peaks and valleys in measurements. Therefore, while levels varied during the test, none were considered high enough to indicate the presence of additional dye to Dr. Briceno.

However, it should be noted, that Fish and Wildlife Services (FWS) had previously sent a letter to FKAA expressing concerns over this dye test. Included within their list of concerns were that 3 days would not be enough to establish a baseline and that monitoring would only be occurring in close proximity to the plant whereas it could not be ruled out that contaminants might surface at greater distances from shore. 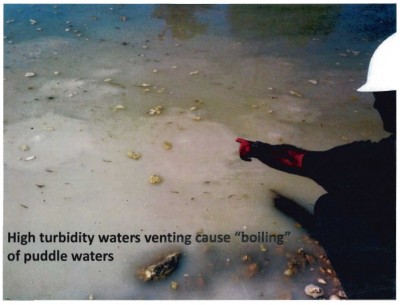 “Page 12 discusses establishing a baseline. We are concerned a 3-day study is not sufficient to establish a baseline given the variability in marine systems….

…Although there is monitoring proposed in the “lakes” area, if water moves under a confining layer and beyond the “lakes”, it does not appear that any wells will be positioned to detect this movement. We recommend additional observation wells are placed to capture this movement. In addition, the area encompassed by the “lakes” is not very large and injected materials may travel a much greater distance.” — (USFWS letter)

Both Mr. Zuelch and Mr. Walker stressed that the FKAA has chosen to request funding for the deep injection well out of “an abundance of caution.” Mr. Zuelch did state they would initially be moving forward with shallow well wastewater injection, as it would take 1-2 years to build the deep injection well [assuming funding]. The system, as it is currently designed, will create “reusable wastewater” [Advanced Wastewater Treatment or AWT standard] acceptable even for lawn watering, which, according to Zuelch, is preferable to the current system of septic tanks which allow untreated wastewater to seep into the ground and nearshore waters. Mr. Walker described the shallow well system as creating “95-97%” protection, “with the deep well we have added the reasonable assurance [due to greater depth] of 100% protection for the local environment.”

Keys community groups that have long been speaking out against the shallow well system applauded the decision to pursue a deep injection well:

“This was a community effort, and it shows that citizen activism is alive and well. We made ourselves heard, and they listened. A great result for all. Thanks to everyone, so many of you, who helped,” said Jerry Tinnell, who, with Camille Blatz, organized the StopShallowSewageWellsintheFloridaKeys Campaign, which held a well-attended educational event and fundraiser just last Sunday.

“We are very pleased that the FKAA Board of Directors has evaluated the scientific research study by Dr. Henry Briceno of Florida International University and concluded that protecting near shore waters and the environment of the Florida Keys requires a deep well for the Cudjoe facility” said Last Stand President, Mark Songer.

Yet the situation is not finalized. A County Commission vote will be scheduled to determine funding for the deep injection well. Expectations are high that the funding will be approved as several commissioners have expressed support (if there was science to back it up) and Mayor Kolhage has long been a vocal supporter.

There are also several law suits still pending over various aspects of the ongoing project and continued concern over the plant’s proximity to a solid waste disposal site which could also add to groundwater and surface water contamination.  Caron Balkany and Christopher Byrd, attorneys representing Keys fisherman Mike Laudiciana, have filed a Mandamus suit against the FKAA claiming they failed to release public reports and doctored those reports they did release. They also have given a 60 day notice of intent to sue for failing to gain federal review on the environmental impact of the shallow wells project. As covered in the 3/20/15 issue of the Blue Paper, they are concerned with a draft environmental assessment the FKAA has included in several publications that contains the logo of the Army Corp of Engineers, though it was neither written nor approved by them.

Dump the Pumps has been communicating with the office of US Senator Nelson about looking into the Army Corps document as well as property rights issues related to the required placement of grinder pumps on private property. It is their intention to publish a 60 day notice of intent to sue the FKAA in the near future as well as pursue an inverse condemnation suit thereafter. Property owners would be suing the government for compensation claiming their private property had been taken for a public purpose.

What happens next in this saga which began in 2009 with debates on funding and methodology remains to be seen. After almost six years, there is still no federal environmental review, the final design of the treatment plant is yet to be determined, and several pending lawsuits have only recently been initiated. Stay tuned….