As pressure continues to mount on the Key West City Commission to find a way to reform Fantasy Fest, the details of its operations start to come under greater scrutiny. Included under the looking glass are its marketing decisions, the relationship with The Bahama Village Goombay Festival, and general financing.

The Key West Friends of Fantasy Fest have been taking the lead on critiques of the marketing of Fantasy Fest; requesting an approach more focused on creative costuming rather than an “adult festival”.  It was William Murphy, owner of Fairvilla Megastores, and President of the Tourist Development Association, responsible for Funding and organizing Fantasy Fest, who responded recently to these critiques. In an open letter he argued they have made great efforts to keep the marketing focus on costuming. However, visiting the official brochure will offer consumers the “Anything But Clothes” party, the “Tighty Whitey” party, “Pole Performance Contest” , and a “Toga Party” that is accompanied by a tantalizing pic of censored breasts. To be fair, these are all events offered by local vendors who paid for these ad spots, and hardly x-rated by any stretch, but one could not describe the theme as costume oriented. The same could be said for their Facebook page, if one views the Fantasy Fest Pictures album. While dominated by people in costume, the message put forward is clearly one of hedonism, as opposed to the claim in the letter of “a strong focus on fun and creative costuming”.  A broad google search of the term “Fantasy Fest” in no way supports the theory that the festival is about costumes or his statement that body painting is done “with no encouragement from Fantasy Fest staff”. This is not to suggest Mr. Murphy is being intentionally deceptive, but rather that the practice and the intent are not coinciding. Further muddying the waters is city ordinance no. 10-14, which creates a legal exception to public nudity laws if an area is set aside, though it does not actually set one aside.

It is curious that it was Mr. Murphy who responded, rather than Linda O’Brien, COO of Market Share, the company responsible for the marketing and production of Fantasy Fest. If you find this delineation between responsibilities confusing, you are not alone. The Tourist Development Council, a county tax funded organization, along with corporate sponsors, provides funding to the non-profit Tourist Development Association (TDA) which owns the Fantasy Fest copyright. The TDA hires The Market Share Company to handle advertising and production of the event itself (i.e. the parade).

However, on the document submitted to the TDC by the TDA requesting funding, the contact person is Linda O’Brien. Ms. O’Brien has no official post on the non-profit TDA, she works for the for-profit, Market Share. Which, by itself, is fine, they stipulated on the cover that Market Share prepared it for the TDA.  But the blending of names/duties does not end there. William Murphy’s signature is on an attached, required financial statement for 2012 and 2013 on behalf of the TDA, which quotes different numbers for the amounts granted by the TDC. The Operating Budget Murphy signed states they received $145K in 2012, and another $150k in 2013; both from the TDC. However in the document for 2015 submitted by Ms. O’Brien the numbers are reversed. Potentially this could be a typo, but by whom? This is not insignificant because Murphy’s report shows that the TDA ended 2012 forty-two thousand in the black which they rolled over into 2013, then ending only twenty-seven thousand in the black. Depending on who reversed those numbers, this could affect funding decisions by the TDC if they don’t pick up on the “error” because they assess need based on prior years’ outcomes.

It is also worth noting that in 2011, O’Brien’s signature appears on a waiver of indemnity for the city, on behalf of the TDA.  Causing one to again wonder where the line between these two organizations exists. How can Linda O’Brien be “authorized to act on behalf of and legally bind” an organization she is only contracted to do marketing for? On a document that waives the city of liability? I attempted to contact Ms. O’Brien several times to see if clarification was possible, but as yet have not had my calls returned.

I also did not receive any return on my calls to Commissioner Lopez. I wanted to ask him about the above issues, how they would have affected city decisions, such as the cap on the amount that Fantasy Fest is required to reimburse the City each year which are at $55,750 even though in 2010 city costs reached $186,899. I was mostly curious about his thoughts on the Bahama Village Goombay Festival which takes place in his district.

Budget questions inevitably lead into a discussion on Goombay Festival and its relationship with the city.  Originated during the 1970s, its leadership has changed hands several times, most recently under controversial circumstance in the City Commission. Technically and legally an independent festival organized and run by the Petronia Street Neighborhood Association, it receives financial assistance from the TDA in the form of insurance and advertising. Market Share, includes Goombay in all of its marketing, which benefits the neighborhood financially but changes the nature of the customer base. They, Market Share, also include Goombay in their request for funding to the TDC. However the contract with the city does not include this, and the additional police, fire, etc comes out of Goombay’s income.

I contacted Ricky Arnold, Jr. for more detailed information. He described his position in the Petronia Street Neighborhood Association as “running the field for the last four years and treasurer last year.”  A position he said he acquired after friends of his [Joseph Schroeder, Robert Oberly, et al] had acquired leadership of the festival, and he approached them with ideas on how to improve its organization.

He confirmed that Goombay is not officially part of Fantasy Fest, nor does it receive any direct financing. The TDA covers costs for advertising, either directly or as reimbursement, and that they share an insurance company for which the TDA foots the bill on Goombay’s behalf. Having recently submitted last year’s final budget and paid the city, he was able to give me estimates on costs off the top of his head, though he did not have specific numbers in front if him. I attempted to find the official document in both city and country online records, but it has not, as yet, been posted.

Apparently Goombay breaks even financially; they took approximately $59,000 and spent $60,000. They receive income from vendors paying $200/day for a booth (plus a fee to the city), tickets at the fair and corporate sponsors. A majority of the overhead costs he attributed to maintenance such as the Police, Fire, inspections, and waste removal (the company Waste Management donates $5000). Out of the 116 booths available, 24 are provided to local organizations for free, several of which the vendors were absent from during the festival, according to Arnold. Unlike Fantasy Fest, Goombay has no cap on what it may owe the city each year, an amount Arnold estimates as having increased by $10,000 over the last two years, primarily for the police.

I asked him about the critique of Goombay having been taken away from the locals and being run by people who don’t live in Bahama Village and vendors from outside Key West. He responded passionately, “I can’t help that I don’t live in Bahama Village… if it were up to me, it would be all locals selling cookies, I don’t even want the tourists, but I can’t pay the bills with cookies. I can’t have top [music] groups [without money]. I need the advertising dollars to do that.”

The discussion on tourists and income led us back to the current pressure to reform Fantasy Fest. While he seemed to agree with the need for change, he had his own ideas on how to go about it. Yearning for the days when people eagerly awaited Fast Buck Freddy’s float, he recommended allowing 10 foot truck floats and $10,000 prizes so the parade would be the focus. “We need a person on the Fantasy Fest Board, I don’t know if it’s me, to come and make it better. And I want it better. You can’t do it half way… need something for people to focus on rather than a 75 year old man buck naked with his balls to his knees. You know what I mean?” 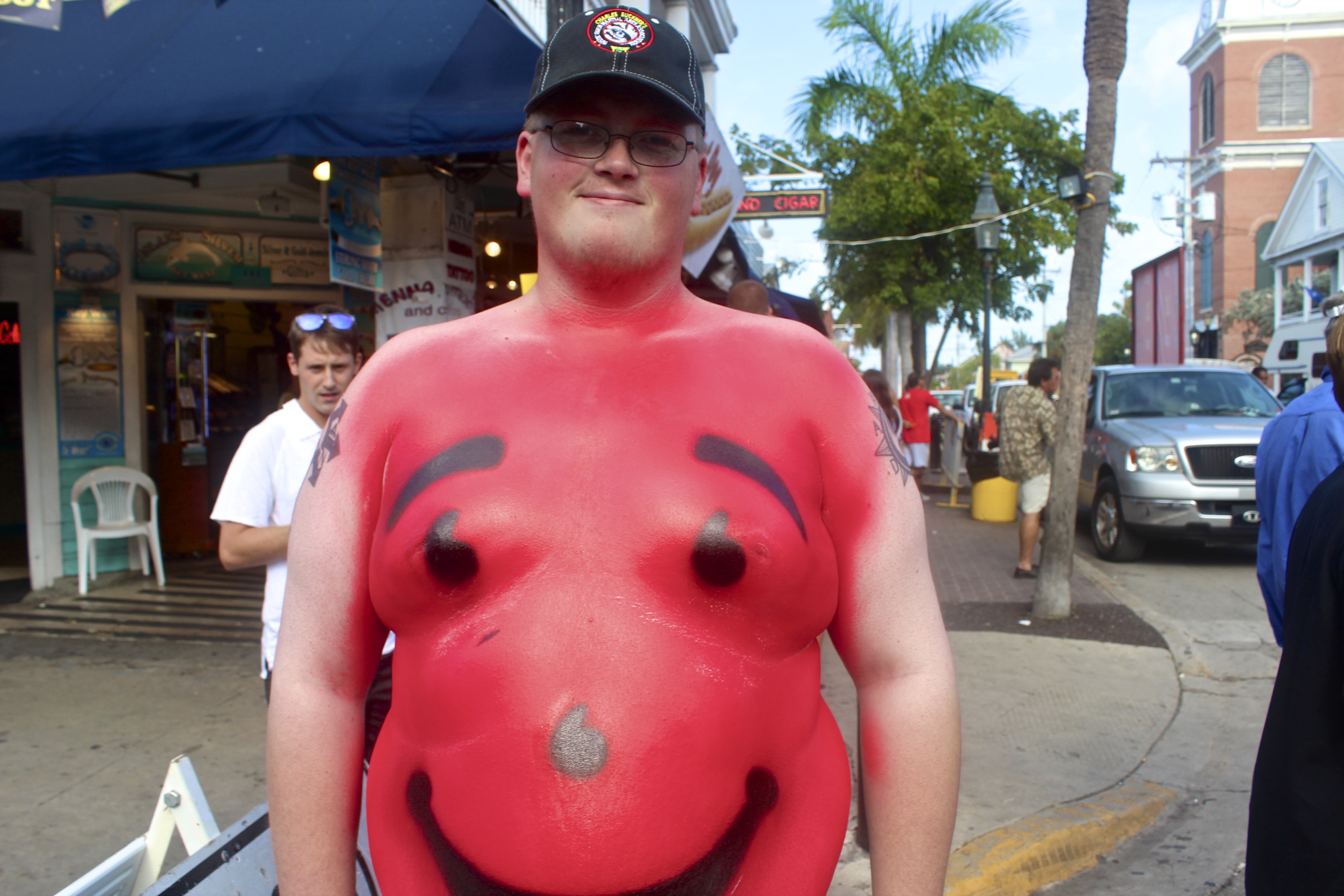 On March 3, there will be yet another meeting at the Old City Hall to discuss what, if anything, will happen moving forward regarding these issues. This time all of the official stakeholders will be present; the City Commission, Market Share, the TDA, the TDC, Friends of Fantasy Fest, Harry Bethel and members of the community at large.  It remains to be seen whether this discussion will be influenced more by the interests of the community or the financiers.

One Response to “Fantasy Financing”