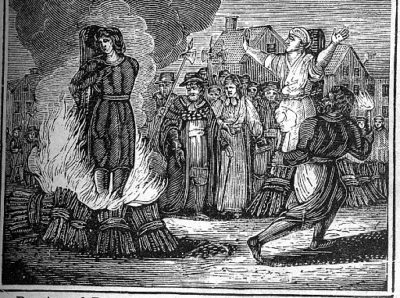 By mullica [CC BY 2.0 (http://creativecommons.org/licenses/by/2.0)], via Wikimedia Commons

“An epidemic terror seized upon the nations,” wrote Charles Mackay in his 1841 masterpiece, Extraordinary Popular Delusions and the Madness of Crowds. “It was a crime imputed with so much ease, and repelled with so much difficulty, that the powerful, whenever they wanted to ruin the weak, and could fix no other imputation upon them, had only to accuse them of witchcraft to ensure their destruction.”

And, lately, Them Russians.

The problem with popular delusions extends beyond their cultivation by the powerful to distract us from real problems. Such delusions can and often do escalate into panics far more dangerous than originally intended.

The purpose of the “Russiagate probe” is to convince us that the Russian state “meddled” in the 2016 US presidential election.

So far the evidence for that proposition boils down to some cheesy Facebook ads (“Help Jesus Beat Hillary!”) and street theater (e.g. an actor playing Hillary Clinton in inmate clothing, haranguing passersby from her “cell”), supposedly funded by Russian intelligence operatives and carried out by their American dupes (including several now under indictment pursuant to Robert Mueller’s investigation).

For the sake of argument, let’s stipulate to the claim that Vladimir Putin unleashed an army of trolls to freak us all out, and that he thought he could thereby change the outcome of the election. Based on current evidence  the attempt looks pretty pathetic, but OK, let’s just say that’s what happened.

In this universe, it’s a safe bet that it didn’t work (Clinton lost by about 80,000 votes from Rust Belt Democrats who decided Trump was Ronald Reagan redux).

Nor, in this universe, is it at all unusual for foreign countries to try to influence US elections and vice versa. Especially vice versa. The US government went all-in to ensure that Russian president Boris Yeltsin won re-election in 1996, and sponsored a coup d’etat in Ukraine in 2014 to overturn that country’s election outcome, to name two recent instances. Business as usual.

But now the same public figures who drummed up “Russiagate” in the first place to explain why their candidate lost in 2016 are attempting to escalate the matter to the level of Mackay’s “epidemic terror.” They’re  comparing “Russiagate” to Pearl Harbor and 9/11,  calling it an “act of war,” and publicly baiting US president Donald Trump to respond accordingly.

In case anyone’s forgotten, Russia is a nuclear power. Throwing around the phrase “act of war” is over-the-top insanity.  It’s a call for the transformation of some Facebook ads into burning cities and piles of body bags, all because an election didn’t come out the way some people wanted and expected it to.

Even if the most grandiose claims for “Russiagate” are true, they don’t constitute anything close to a legitimate casus belli.

Time to calm down, America. Whatever “Russiagate” ultimately turns out to be, it won’t be anything that’s worth a single drop of American or Russian blood.