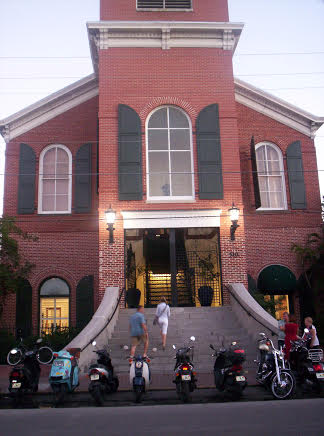 Gathered in the Commissioners’ Chamber of the Old City Hall, on November 17, 2014, former City Commissioner Harry Bethel brought together State Attorney Catherine Vogel, Police Chief Donie Lee, and approximately 50 concerned citizens of Key West to discuss the future of Fantasy Fest at a meeting labeled “Key West, Our Island Life”. Sitting behind the polished wood banister alongside S.A. Vogel, beneath a neon 3 minute speaker’s timer that was occasionally enforced, Bethel promptly began the meeting at 6 PM with a short speech that left no doubt as to his agenda.

He began by describing his impetus for this round of discussions on the subject being a massive influx of emails and personal comments objecting to Fantasy Fest becoming increasing lewd. He read into the record four suggestions offered to, not by, him (paraphrased here for brevity):

4.  We are all taxpayers; families should not lose access to their own city due to obscenity.

Bethel then went on to clearly state his own opinion and purpose, for the record, “…We can do this [reform Fantasy Fest] without hiatus or referendum by working together. Titties and genitals do not bring money they only fulfill people’s fetishes doing things they would never do in their own home town.”

Catherine Vogel, Attorney for the State of Florida

Vogel began by clearly defining her position as objective, merely there to inform on the legal statues and options. She had no opinion as to how the community should proceed but promised the state would enforce whatever decisions were made within the legal limits. Vogel stated there were essentially three applicable legal statues.

1.  Public Nudity- this is a local ordinance and she recommended speaking with City Attorney, Shawn Smith, for more information.

2.  Lewd/Indecent Exposure- a 1st degree misdemeanor carrying up to 365 days incarceration, should a jail sentence be imposed. While explaining this statute, she cautioned that mere nudity was not enough for a conviction; it required “exposure of the private parts in a vulgar or indecent manner.”

3.  Disorderly Conduct- a 2nd degree misdemeanor carrying up to 60 days in jail, should jail time be imposed. This would require corruption of public morals or outrage public sense of decency, if it constitutes shocking the conscience of the community.

Vogel did state that she believed it would be possible to make a Disorderly Conduct case based solely on exposure of the genitals but suggested the Indecent Exposure charge, which would require evidence of vulgar behavior, may be more difficult.

Sloan Bushinsky asked how much it would cost to try such a case. She estimated it would cost her office about $ 1000. He wanted to know about the full cost for jail, defense, and appeals, potentially up to the Supreme Court. She seemed to find such a notion humorous, but did concede that incarceration would bring the highest taxpayer costs, though she did not appear to believe most cases would deliver verdicts that severe.

The Citizens of Key West

At this point the floor was opened to questions and comments. Roughly 15 people stood to express themselves. These fell into 5 umbrella categories:

1.  Get rid of Fantasy Fest, it has become an immoral blight on the community.

2.  People with naked genitalia should be arrested no matter where they are or when it is.

3.  The Fantasy Fest Zone needs to be better contained by police/ private security.

4.  The Fantasy Fest Zone rules need to be posted by vendors and strictly enforced by police.

5.  The marketing company’s contract should be reviewed, as they currently focus on promoting nudity  over costumes.

No one stood up to argue that the status quo is fine, don’t change a thing. Perhaps this is the reason Bethel stated at one point that he believed there was a silent majority in favor of reform. Though, when I followed up to ask if he had any kind of polling or numbers to support that hypothesis, he replied that he had lived in the community for years. This, the community’s will, was one of the two pillars he offered in support of his argument for reform. The other being his belief that the Fantasy Fest tourists relied on anonymity to do in Key West what they would never do at home. Therefore making a realistic threat of public humiliation by arrest record would, he believes, domino into calming behavior; even suggesting at one point that those arrested be exposed on social media.

During the meeting, I asked Police Chief Lee if he agreed with the assessment made by several speakers that the police were overwhelmed/ undermanned and Fantasy Fest was growing larger and more extravagant each year. He stood and replied, “I agree with everything that has been said.”

When I asked if he had suggestions, from a strategic perspective, as to what would be involved with some of these proposals, he seemed reticent to initiate anything, publicly. “I don’t have all the answers, it’s our job to listen and see how we can help be a partner…we are kind of a paramilitary organization, so that’s what we are going to do.” Following up after the meeting, I asked more specifically what it would take to completely contain the Fantasy Fest Zone in order to prevent naked people from leaving; he offered a rough estimate of 50 officers per shift, in order to block every intersection. This, of course, would be in addition to the normal duties of the department during this period. I asked him if he thought that was practical. His response was succinct, “No.”

Asked if he thought the idea of making a few arrests would successfully domino into improvements, he gave a short guffaw, “We do arrest people…. Last year we arrested 2 people for Disorderly Conduct, for exposed genitals, and we arrested a couple for having sex in public. That was on Dupont Lane.”

According to a Miami Herald article about Fantasy Fest from October, 2014, there have been numerous arrests over the years for charges ranging from indecency to murder. In 2000, during a particularly severe crackdown on indecency, there were 60 arrests related to public nudity. The following years saw no change in the trend of Festival behavior. This history would suggest that Bethel’s concept of more arrests leading serving as a cautionary tale may not be accurate. Arresting individuals for specific behaviors in specific areas can also be problematic, as the city discovered in 2001. As covered by Dennis Cooper for Key West the Newspaper, the city arrested several women for exposed, painted breasts in public but not the artists or other women similarly dressed. These cases ended up being dropped by the DA due to selective enforcement. An example which suggests that arresting people for indecency, and then publicizing those crimes more than other violations could create issues for the city rather than the offenders.

Kathryn Watkins, of the Key West Fest Friends, gave a short, erudite speech that received the most applause of the evening. Watkins suggested that significant responsibility for the increased focus on nudity in recent years belonged to the marketing company and their chosen vendors whose online advertising promote the “adult” aspects of the event, leaving aside the “costumes”.  She called for revisiting the contract when it comes up in June to prioritize focus on the creative costuming of Fantasy Fest. Watkins also recommended increasing the onus on vendors by requiring they post the event rules, strongly encourage customers to follow the rules when leaving, and possibly contribute to supplementing the police with private security and/or neighborhood watch. Significant focus of the Fest Friends concept was placed on re-prioritizing the Fest through events, contests and promotions towards the floats and costumes. The KWFF will be holding an open meeting on December 8, 7pm at Viva Zapata’s to further discuss their ideas.

There were also individuals representing religious and conservative/family oriented cultures within the community who felt that Fantasy Fest was simply a source of immoral behavior best eliminated all together. Citing anecdotes of particularly inappropriate, possibly illegal, behavior they had witnessed as an indictment of the entire festival, they saw it as particularly poisonous to those children growing up within Key West.  The idea that they, as members of the community, should have to alter their own behavior for everyone else seemed particularly unfair to them. Though the irony of their demand that everyone else change so they would not have to change for everyone else appeared to escape them.

After the meeting, Bethel forwarded me the email he had sent to the tourist board, city council members, and several other citizens inviting them to come that evening. Included were 20 Fantasy Fest photos of people in various states of undress and costuming, culled from Facebook,  and the message,

“Well everyone this is only part of what we expose our City and our Residents too. This what is destroying the Image of our Island City. WE CAN CHANGE THE GROSS AND DIGUSTING WAY THESE SCUMS ABUSE OUR CITY. Now is the time. Hope to see you ALL at the “Key West our Island Life” committee meeting at Old City Hall, 6:00 PM. Feel free to forward to anyone else. The silent majority are upset. Take care.”

Aside from the various spelling and grammar errors, or questions as to why he spends time organizing naked Facebook images, clearly Bethel is passionate about his distaste for people who enjoy the Bacchanal aspect of Fantasy Fest and is confident that the majority of the population agrees with him.

In fact, it is against both event rules and the law to expose genitals in public, and women’s breasts may not be visible outside the Fantasy Zone. Yet these practices obviously do occur. The police, supplemented by forces from Orange County and other areas, do make arrests for Disorderly Conduct every year. Yet this has produced no change to the general behavior. The event was originally created because Key West had little tourist activity during October. Apparently, the very first parade had a woman wearing only body paint as a hood ornament on the very first float.  The “attracting tourists” issue has clearly been resolved, yet there are members of the community who are offended by the omnipresence of the naked human body for an entire week in October. The question now confronting Key West leadership: How to maintain the economic benefits of Fantasy Fest while finding a way to satisfy both the Hedonistic and Puritanical elements of its citizenry?

4 Responses to “An End To Fantasy Fest?”