Last night, as I was shaking out fiber capsules from a plastic bottle, about to take them as part of my seemingly endless pursuit of regularity, I looked at my palm and saw five caps resting there preingestate. Yes, I thought, five capsules is the amount I want. But then I thought, how do I know there are five and how do I even know what five is?

It all began, as we did if you’re on the evolution team, in Africa, and it began with the Ishango bone. The IB (shown below) is a baboon’s fibula that some think to be a tally stick, that is, something used to record and document numbers. It was found in 1960 in the former Belgian Congo by archaeologists exploring a village long buried by a volcanic eruption. The bone is marked with three columns of asymmetrically grouped notches. The way the notches are grouped suggests an understanding of multiplication and division. Law writes that numbers and counting began with the number one and that the IB is “the first solid evidence of the existence of the number one, and that someone was using it to count.” 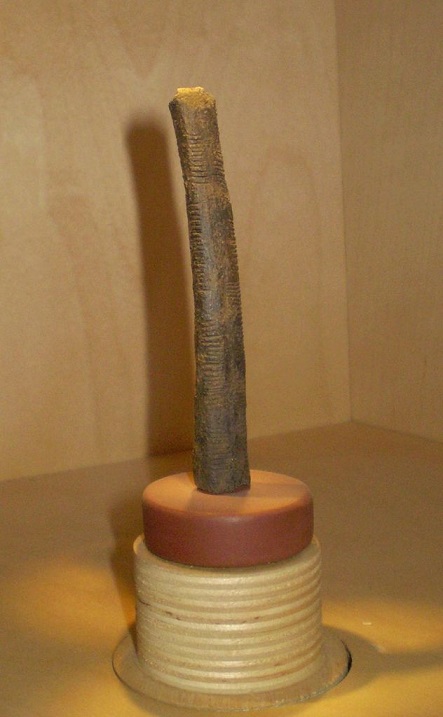 He goes on to note that counting didn’t really come into vogue until cities formed in Sumer (part of ancient Babylonia) around 4,000 BC and commerce got going. People needed to keep track of their goods and the trades involving them. As orchestrated by the city parents (although they were probably literally city fathers back then), folks used tokens to represent their tangible goods rather than, say, carrying around five live chickens everywhere they went. When they traded a chicken (or ate it for dinner), they gave over or gave up a token. Thus, addition and subtraction happened and with them, voila!, arithmetic. The ancient Egyptians next became the first to invent symbols to represent numbers—one million, for example, appeared as a prisoner begging for forgiveness (and a shorter sentence perhaps?). Then came the ancient Greeks and the mathematical ball really got rolling. It went over the cliff when the Indians (not the Arabs) came up with the concept of zero, which “transformed counting and mathematics” because it gave us “the ability to make numbers infinitely large and infinitely small.”

None of this explains where our counting ability comes from, though. One neuropsychologist, Brian Butterfield, thinks we have an innate sense of number hard-wired in our brains (see “The mathematical brain – how children learn to count“). He describes a small region behind the left ear as “the number module”: “in the same way we perceive the ‘greenness’ of a leaf we can also perceive the “twoness” or “threeness” of a group of objects.” We learn the names and symbols for numbers later. Kids as young as twelve months have a sense of sets of things. Then, by three to five, children can recognize the number of things in a set, say four apples, without having to count them individually and then our math skills (well, most peoples’ math skills) keep developing from there, governed in later stages by one’s education level and career path.

Sadly, I still seem to be at the pre-three-year-old math stage as I tend to count my fiber capsules individually when I’m taking my daily dose. At least I’m spared the ignominy of having to point to each one as I do this. And I now have an idea of how to make some long-overdue progress in the tallying department. Tonight, before I shake the caps into my palm, I will scratch vigorously behind my left ear to stimulate the number module. This will either help me recognize the desired set of five immediately—the hoped-for result—or, and this is the more likely outcome I’m afraid, cause me to forget what I was doing entirely.

Image: The Ishango bone on exhibition at the Royal Belgian Institute of Natural Sciences. By Ben2 – Own work, CC BY-SA 3.0, https://commons.wikimedia.org/w/index.php?curid=3166443