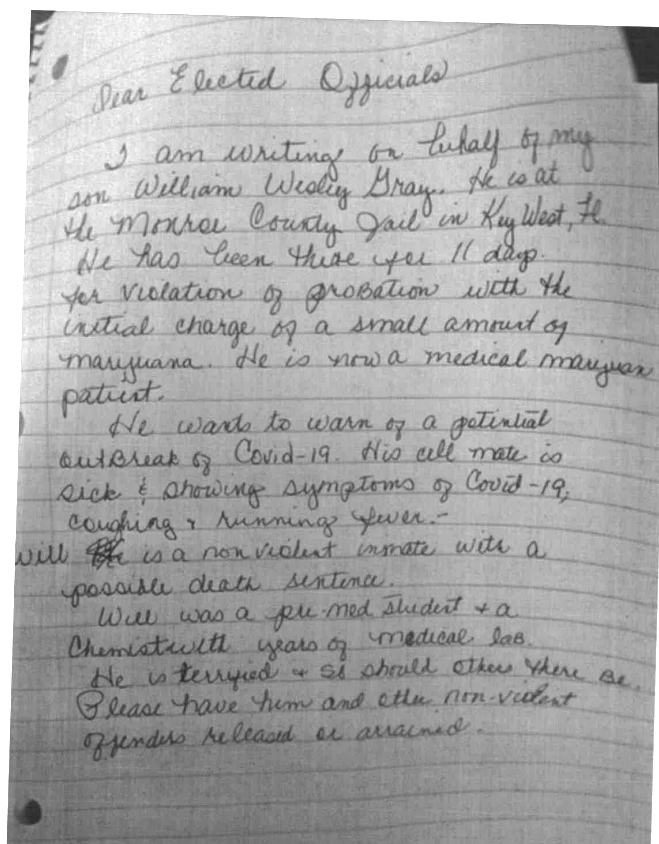 “My son is in jail for violation of probation with the initial charge of a small amount of marijuana,” wrote Shirley Gray who wants to warn officials about a possible COVID-19 outbreak in a Monroe County jail. “Will was a pre-med student with years of medical lab.” His cell mate is showing symptoms of COVID-19.  “He is terrified and so should others there be.“

Right now the number of people infected with COVID-19 in the Keys is slowly increasing by an average of just 2.7%* each day. There are 77 confirmed cases in Monroe County as of this morning.

But what if the jail or the homeless shelter were to experience an outbreak? According to the Sheriff’s website there are over 285 inmates in the local jails and a team of 139 corrections officers. The implications of cluster infections are daunting. Evacuating cruise ships, even air craft carriers, prisons and jails leads to impossible choices: How to rescue people who are in the process of infecting each other while still protecting the outside community from the people who need to be evacuated?

The COVID-19 epidemic inside Chicago’s Cook County jail has become the poster child for disastrous coronavirus cluster contamination. On April 9th the family of Jeffrey Pendleton filed a lawsuit against the Cook County sheriff. Pendelton had been shackled by hand and foot to his hospital bed while he lay dying from the effects of the coronavirus. He was the first Cook County jail inmate to die from COVID-19. At the time 251 other inmates had tested positive inside the jail. Six have died so far. As of last Wednesday 173 Cook County corrections officers had also been infected and one had died.

In opposition to a lawsuit calling for the urgent release of medically vulnerable non-violent inmates in the Cook County jail, the mayor of the city of Chicago argued that such a move would threaten “to consume the resources of the city and endanger the health of its residents.” Judge Matthew Kennelly rejected the emergency request to release inmates in large part because Cook County jail inmates had failed to take advantage of an expedited bond hearing procedure. In response to the COVID-19 epidemic Cook County had established an emergency hearing process to allow immediate release of some inmates on reduced bond or house arrest. The judge obviously thought the expedited reduced bond hearings were a good idea.

On April 13th we asked Chief Judge Mark Jones what measures to limit jail populations had been taken in Monroe County and whether an expedited reduced bond approach had been considered. The Judge responded by pointing out that bond hearings, jail pleas and admissions by incarcerated defendants had been defined as “mission-critical” and were not included in the list of proceedings that he had postponed in his March 18th administrative order addressing the coronavirus crisis and that Monroe County judges were making themselves available to conduct those criminal proceedings via video conferencing. Additionally Chief Judge Jones explained that for inmates who are being held on out of county warrants there are bond status review hearings conducted on a weekly basis “to assess and possibly modify conditions of release to facilitate their release.”

On April 11th, Monroe County State Attorney Dennis Ward told us that some discussions had taken place and that measures had been put in place but when we asked what those measures were he said, ”The sheriff would be better suited to respond.” We are told the sheriff does not have the authority to release inmates without a court order.

On April 6th we had asked the Sheriff’s Office how his office was managing the risk of infection at the jails. We were told that all new inmates are quarantined for 14 days, their temperatures are taken each day, and that extra disinfectant is being used to keep the jails sanitized. However Gray’s mother told us her son, Will, who is being held at the jail on Stock Island, was never placed in isolation. “He entered the jail on April 11th,” she says, “and he was put in a cell with another man who is homeless.“

The sheriff says the Monroe County jail system has two negative pressure isolation units where inmates who are sick with COVID-19 can be kept quarantined away from the jail’s general population. (We were told there were no inmates showing symptoms and no known cases of COVID-19 at any Monroe County jail facilities as of April 6th.)

Ms. Gray said her son, Will, is terrified because his cellmate was coughing all the time and had been asking the guard for medication for nearly a week but guards had ignored his pleas. “He wants to warn of a potential outbreak of COVID-19. His cellmate is sick and showing symptoms of COVID-19, coughing and running fever,”  Gray wrote in a letter sent on Saturday to Sheriff Rick Ramsay, Governor DeSantis, and County Mayor Heather Carruthers. Ms. Gray told us guards came and removed her son’s sick cellmate later that afternoon.

Interviews of former inmates revealed that no matter the efforts of the sheriff, the jail is simply not designed to respond well to a lethal virus epidemic. Most inmates at the Stock Island jail are kept in four large dormitories. The bunk beds are crammed within 2 feet of each other with a capacity of 55 to 60 inmates per dormitory. The ventilation comes through a recirculated air system. Guards are currently wearing masks but inmates are not.

At this point we don’t know whether or not Gray’s cellmate is infected with the coronavirus. (We are waiting for a response from the Sheriff’s Office.) What is certain is that being preventative rather than reactive is the rule with this epidemic and the three county jails could be ticking time bombs.

The novel coronavirus is still King of Cook County jail despite extensive measures. Inmates have been moved to isolated confinement, the jail has painted x’s on the floor to indicate standard 6-foot social distancing and the federal judge has ordered increased testing for COVID-19. But the administration admits it’s not possible to fully enforce social distancing.

It may not be possible to keep a highly contagious respiratory disease from spreading like wildfire in a jail environment. In this context a high priority should be to limit the jail population as much as possible. To Ms. Gray that means only those charged with violent crimes.

Many small time drug offenses and “quality of life” code violations could be enforced without arrest. In March the Monroe County Sheriff’s Office ordered deputies to issue Notices to Appear for misdemeanor offenses in lieu of arrest whenever possible in order to keep jail population down. This “hands-off” measure also helps keep both officer and suspect safer from infection.

A review of Monroe County arrest logs shows that local law enforcement officers are still arresting and jailing people for non violent-offenses like “obstructing without violence”, “trespassing”, and on warrants for “violation of probation.” A young woman who resides at Porter Place was jailed earlier this month after she herself had called KWPD to have her uninvited ex-boyfriend removed. The body cam footage shows that Pita Gonzales kept swearing at the ex as he was directed by police to leave. Exasperated, the officers took her to jail for “obstruction without violence.”

Finally, an expedited system using reduced bond and house arrest to limit the number of inmates could be implemented to help get non-violent offenders who are arrested out of jail quickly. We were told by the Sheriff’s spokesperson that such measures are “not deemed necessary at this time.”

With all due respect to the people in charge, if we wait for inmates to start infecting each other the time to do something will be “3 weeks ago.” Like many other communities we will find ourselves having to choose between watching hopelessly as inmates and guards become infected or releasing them to possibly infect more people in the outside community.

Neither the chief judge nor the state attorney nor the sheriff can draft all of the prudent policies on their own.  They must work together to protect all members of this community and to minimize the risk of cluster infection inside the local jails.

”My son is a non-violent inmate,“ says Gray, “but he has been given a possible death sentence.” 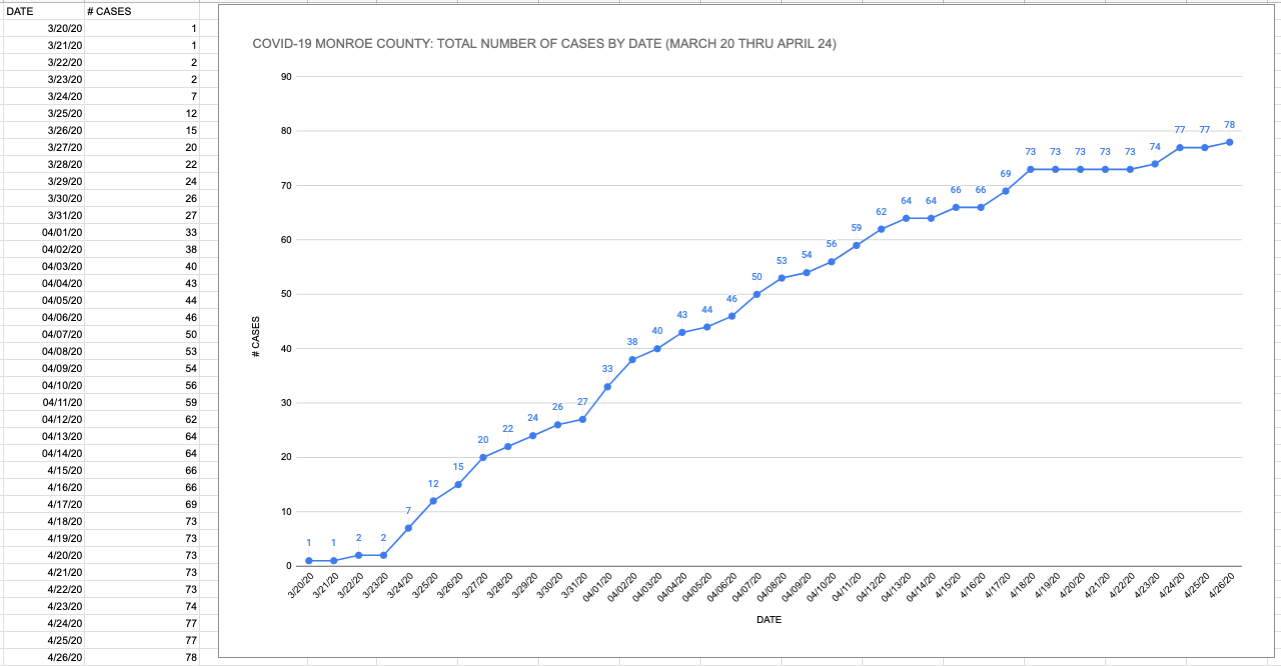