There are many ways to achieve the simulacrum of immortality, some purposeful, some accidental, some beneficent, some destructive, some self-serving, some selfless. Since no one outside the realm of fiction can (yet) achieve real physical immortality (more specifically “exemption from death or annihilation”), those who pursue it or have it thrust upon them end up in the “exemption from oblivion, lasting fame” category. One such person is Steve Jobs, the Apple guru who gave us the iPhone, iPod, and iPad, to name the more ubiquitous devices, and almost singlehandedly “wired” our world. Steve’s achievements, failures, and character have been appropriately (in the view of some) or inappropriately (in the view of others) lionized. There are numerous books and at least one documentary film and one feature film about him. Now, perhaps capping the “exemption from oblivion” pile, comes an opera titled The (R)evolution of Steve Jobs that is premiering this summer at the Santa Fe Opera.

The SFO describes the new work this way:

Many of us want to change the world. Steve Jobs did. An enigmatic public figure, he could be magnetic yet unapproachable, empathetic yet cruel, meditative yet restless. He helped connect us all while building a firewall around his own emotions. At the heart of this world premiere is the story of a man who circles back to the formative events in his life while learning to acknowledge his own mortality.

A brief 1965 prologue aside, the tale begins in 2007, four years before his death, when Jobs is already suffering from the illness that will take his life. In Scene 3, he meets the ghost of Kobun Chino Otogawa, his former Zen mentor and the biopic flashbacks begin. 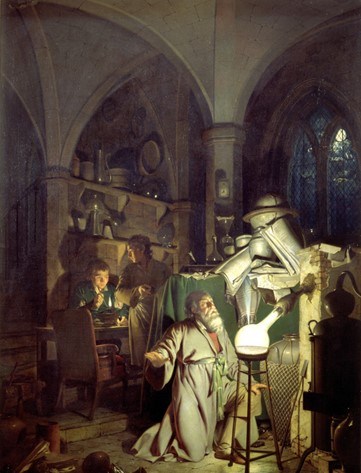 Crap! Did I leave out the cinnamon again?

Judging from what I’ve seen and read, Jobs seemed to want to live forever, at least in name. In his words, he “wanted to put a [permanent] ding in the universe.” So, why do people want to live eternally? As someone equally famous as Jobs might say, “It’s the alternative, stupid.” Most views of immortality relate to the essence or soul of something living on after physical death. Still, even today to some, the idea of physical immortality appeals and even seems feasible via spiritual transfers such as reincarnation or scientific means like cryogenics, rejuvenation, digital immortality (see another opera called Death and the Powers), and the “impending technical singularity.”

The idea of procuring physical immortality is not new, of course. It goes back at least to the days when alchemists sought to find the right formula for the elixir of life, a “mythical potion” that cures all ills and grants the drinker eternal life and/or eternal youth. This quest started in ancient China, moved on to India, and eventually made its way to Europe as the search for the elusive philosopher’s stone of Harry Potter fame.

But as usual for most unscientific and nonphilosophical humans, we forget that pesky “be careful what you wish for” warning. We need more cautionary tales like “5 Reasons Immortality Would Be Worse than Death” from Cracked. My favorite of these reasons is that “time speeds up until you’re insane.” As we get older, the Cracked staff reminds us, “every year of your life seems shorter than the previous one.” “Live to be a million,” they explain, “and [non-immortal] people will seem to be just exploding into and out of existence around you…. This is why Dr. Manhattan turned into such a dick in Watchmen.” Their last word of advice is “if you run across the Holy Grail, don’t drink from it. It’s going to end badly.”

So, how bad can death be, really? Optimistically, you could think of it as catching up on all that sleep you missed. And if you do it, die that is, in an environmentally responsible way (see “Greening the Trip to the Great Beyond“), you can give back to the universe after taking from it all this time. “The idea,” one quoted writer observes, “is to allow the body to return to the elements, to use what remains of a life to regenerate new life, to return dust to dust.” If that cellular devolution continued along its natural course, eventually, I imagine, we would end up as the star dust from whence we came. That seems fitting, don’t you think?

(Image: Joseph Wright of Derby, The Alchymist, In Search of the Philosopher’s Stone, 1771. Public Domain.)