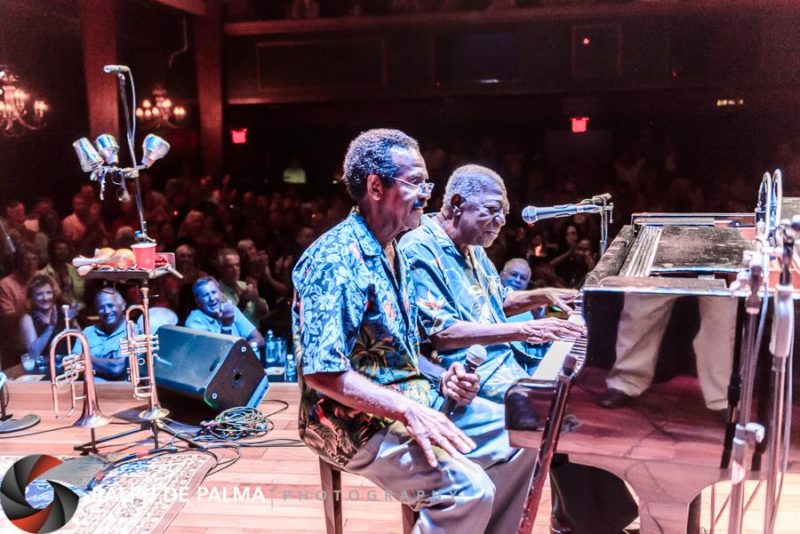 Produced by Ralph De Palma and released on the Soul of Key West label, this is an album of music that had to be made, with songs that had to be sung, by two Key West legends – Lofton Coffee Butler and Cliff Sawyer.  It’s the culmination of two storied careers, of music and friendship, of two very special Key Westers. Coffee Butler graduated from Frederick Douglass High School, and Cliff Sawyer graduated from Key West High School. Coffee was a “showy” shortstop and wanted to be the next Jackie Robinson. Cliff was a track star and enjoyed running around the island to stay in shape.  Most of the Butlers played saxophone, but Coffee’s high school music teacher Ellen Welkers Sanchez encouraged him to play piano.  Cliff Sawyer remembers hearing his father playing trombone with Fats Navarro on the street corner outside his home. Cliff began singing at four years old.  The first song he ever sang was “Bad, Bad Whiskey …it would make you lose your happy home.”

These two life-long friends performed together frequently throughout their years.  They played a steady gig for almost 20 years at Little Palm Island with Phil Sampson. Cliff would often sit in with his best friend Coffee at his Hukilau gig.  When Coffee retired from performing in 2005, fittingly at a Cliff Sawyer concert at the Tennessee Williams Theater, he and Cliff sang Louis Armstrong’s “A Wonderful World”.

Ralph De Palma succeeded in getting the two back together again for the 2015 release of his book about Key West musicians, The Soul of Key West, Volume II, along with an all-star cast of performers. After five additional sell out concerts De Palma began this recording project, this album will be their first recorded work together after all of these decades.

Please join us for this once in a lifetime opportunity to celebrate two Key West legends. We will wish Coffee Butler a very happy 90th Birthday and enjoy some great Key West music. Credits include Mrs. Sara Sands Butler and Mrs. Naomi Saunders Sawyer for giving us these two phenomenal Key West talents and fittingly the title song “A Mother’s Love”.  This album is the result of a perfect storm of talented musicians, gifted vocalists, and award winning producer Ian Shaw, all giving every ounce of talent.  Special thanks to the Key West Theater and the Bahama Village Music Program for allowing us to record in their spaces. The band for this performance includes Ray Spence, Bubba Lownotes, Ericson Holt, Larry Baeder, Joe Dallas, Ken Fradley, and Mark Rose.  Vocals include the “King of Key West Soul” Robert Albury, Mina Lopez-Martin, Clayton Lopez.

The newly renovated Key West Theater is excited to be the choice venue for this one of a kind performance.

Online at thekeywesttheater.com, ticketfly.com OR at the Key West Theater box office at 512 Eaton St.