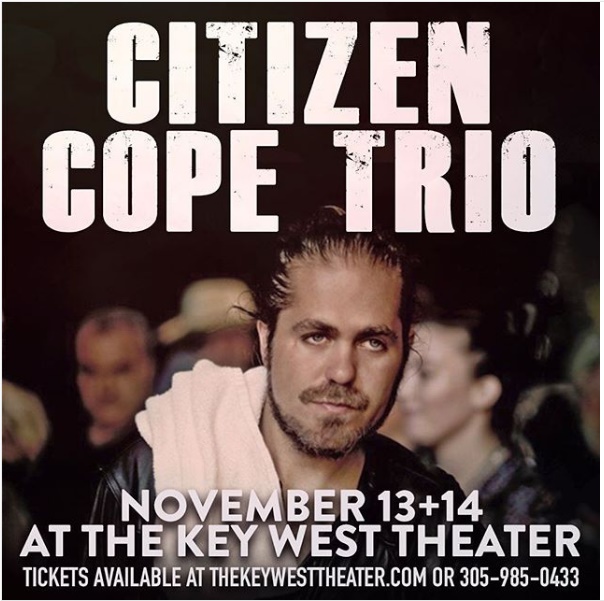 Last May, Clarence Greenwood of Citizen Cope performed two sold-out shows that were billed as an “Intimate Solo / Acoustic Performance” and that is exactly what was delivered: An evening of what could only be described as “less is more” with just Clarence, his guitars, a small amplifier, and a stool. But it was during that performance that the audience received a small dose of the energy behind one of his fan favorites “Let the Drummer Kick” paired with a tracking of a drum beat and keys.

“For the majority of the performance, it was seated silence and all eyes and ears were on Cope. Once that beat started, the entire audience was out of their seats movin’ to that song” Kelly Norman describes. “Bringing Cope back as a trio with a drummer and a keyboard player was something we knew his fans would be pumped about.”

Returning to Key West on November 13th and 14th, Greenwood will be joined by Anthony Brewster on keys and Jay Nichols on drums, adding a new dynamic to his already highly sought-after performance. Tickets can be purchased online at thekeywesttheater.com.

TICKETS
Available online at www.thekeywesttheater.com  and at the Key West Theater box office by calling 305-985-0433.

About Key West Theater
Key West Theater is located in downtown historic Key West, within walking distance of multiple restaurants, shops, and bars. Since its renovation in 2015, the nonprofit theater has hosted some of the biggest names in the entertainment business in addition to producing numerous original plays and musicals.