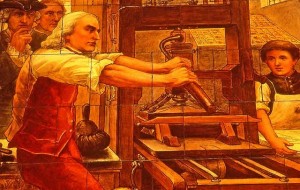 Benjamin Franklin has got to be a role model for anyone who makes or has made his or her living as a publisher. We all learned about Benjamin Franklin in school– the statesman, diplomat, scientist, inventor and a signer of both the Declaration of Independence and the Constitution. But he started as a printer and a publisher.

At the age of 12, Ben became an apprentice to his brother James, a Boston printer, and learned the printing trade. Three years later, in 1721, James Franklin founded the New England Courant, the first truly independent newspaper in the colonies. Back then, logically, printers also often became publishers. They had the presses, paper and ink. But newspaper publishing was a risky business for printers. Printers had to be licensed by the British government– and printer/publishers who dared to offend the government could quickly find themselves not only de-licensed, but also jailed. And that is exactly what happened to James Franklin. Keep in mind that, before the creation of the United States of America, there was no freedom of the press.

One of the reasons that James Franklin got in trouble was the publication of a series of opinionated articles by Silence Dogwood, presumably a local middle-aged widow. James refused to name the person who wrote under the Silence Dogwood pen name– his younger brother Ben. To keep the business going while James was in jail, the family put everything in Ben’s name. So, at the tender age of 15, Benjamin Franklin became an editor and a publisher.

At the age of 17, looking for greener pastures, Ben moved to Philadelphia, at that time the most important city in the colonies. After working with a number of local printing houses for a number of years, he established the influential Pennsylvania Gazette in 1729. This gave him a forum for agitation about a variety of local issues. In 1733, he created the now-famous Poor Richard’s Almanac, published annually until 1756. It was a best-selling pamphlet distributed throughout the colonies. Press runs reached 10,000 per year. Poor Richard’s proverbs, still famous today, included “A penny saved is a penny earned,” “There are no gains without pains,” and “Fish and visitors stink in three days.”

Right out of college, I had the opportunity to work in corporate public relations in Philadelphia– history heaven for fans of Benjamin Franklin. At that time, the Poor Richard Club– a professional club for those in advertising-related businesses– sponsored classes for young people in the business. One of the classes I attended was taught by the public relations consultant for the local Catholic Diocese. It was a rare opportunity to get that kind of insight.

Ben Franklin became wealthy by establishing a chain of print shops up and down the seaboard– and expanding newspapering in the process. And he practiced advocacy journalism. The unabashed focus of his newspapers was support of the American Revolution.

Dennis Reeves Cooper founded Key West The Newspaper (the Blue Paper) in 1994 and was editor and publisher until he retired in 2012.