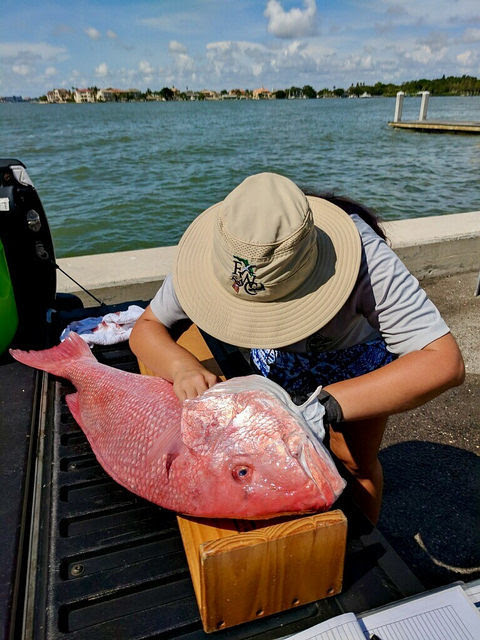 Researchers with the Florida Fish and Wildlife Conservation Commission’s (FWC) Fish and Wildlife Research Institute are asking for help from anglers, spearfishers, and charter captains to capture information about the Atlantic red snapper fishery.

NOAA Fisheries announced the recreational season will be Aug. 10-12 and Aug. 17-19 in Atlantic federal waters (beyond 3 nautical miles from shore). Anglers and spearfishers are limited to one fish per person, per day, with no minimum size limit.

Each day of the season provides an opportunity for researchers in Florida to collect biological data from harvested red snapper, which can be used to monitor the health of the fishery. FWC biologists will be greeting recreational anglers at boat ramps and marinas along Florida’s east coast to conduct short interviews about their fishing trips. Biologists will also ask for permission to collect biological information from harvested fish.

Charter vessel operators also work cooperatively with FWC researchers during the Atlantic red snapper season by providing details about their fishing trips and allowing biologists to collect samples from harvested fish at the dock.

The survey responses and biological samples submitted by anglers will provide valuable data about the red snapper fishery. The FWC will provide information collected to the Southeast Data, Assessment and Review (SEDAR) for the next red snapper stock assessment.

In 2017, the Atlantic red snapper season was open two weekends in November. FWC shared data collected during the season with federal fishery managers to help them estimate whether the federal quota was caught during the season, which coincided with inclement weather and rough seas in many areas.  After reviewing this and other available recreational fisheries data, NOAA Fisheries estimated that an extended season was warranted and reopened harvest for an additional weekend in December.

During surveys conducted in Florida last year, FWRI researchers sampled more than 700 red snapper that were caught recreationally to collect information on the size, weight, age and sex composition.

This year, FWRI researchers are again asking anglers and charter vessel operators to assist with data collection efforts. This work would not be possible without the collaborative efforts of scientists, anglers, spearfishers, and charter captains working together to collect high-quality data to manage Florida’s fisheries.

For information on snapper rules and regulations, visit http://myfwc.com/fishing/saltwater/recreational/snappers/

If anglers catch a tagged red snapper, FWC researchers ask that they report it to the Angler Tag Return Hotline: 800-367-4461.