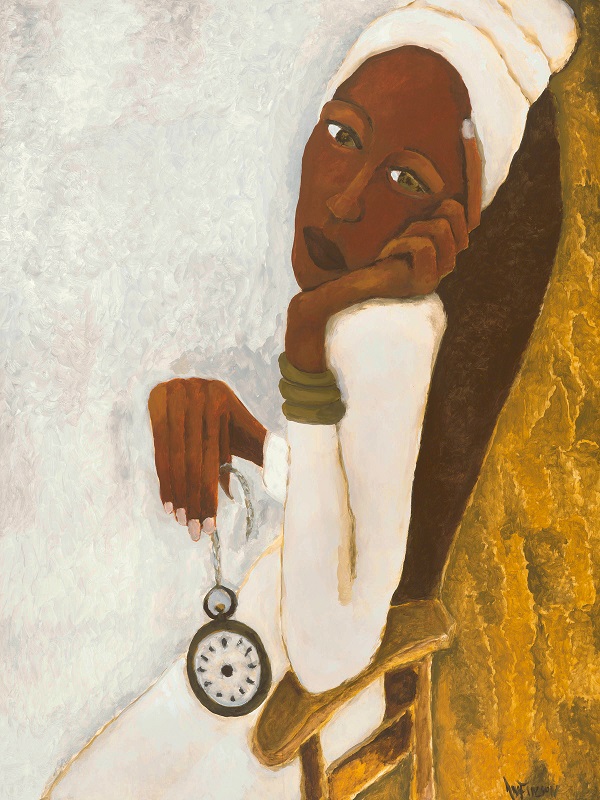 Response Time, 40 x 30, oil on linen panel, is one of 40 Eric Anfinson paintings celebrated at The Studios of Key West in the Sanger Gallery on Thursday March 1 with a special opening reception from 6pm-9pm. For more information, contact The Studios at 305-296-0458 or visit TSKW.ORG.

On Thursday, March 1, The Studios of Key West invites the public to celebrate artist Eric Anfinson’s newest exhibit “Without Within,” with a special opening reception in the Sanger Gallery from 6:00pm -8:00pm.  The exhibit features over 40 new works that showcase Anfinson’s archetypal figures and expansive narratives presented in two distinct series.

The work, he says, began with two diverging portraits.

“Response Time’ which is the exhibit card image, took me in a different direction of archetypes,” says the artist who exhibits internationally with work appearing in collections worldwide. “It’s the imagined world of those I feel near me but can’t see.”

In these paintings, Anfinson continues his exploration of the human form, infusing his work with sensuality and scenes imagined. Yet, while his definitive style of synthetism remains, there is a visibly different approach in contrast to his more saturated, colorful works of the previous 17 years.  An earthy, muted palette coupled with painterly brush strokes that adhere loosely on the linen he now primarily paints on evoke a post-impressionistic, dreamy world in which to enter while maintaining the intimate force of the figure within.

“I’m not looking for realistic,” says Anfinson. “I’m looking for permission to have your own story.”

The “I AM” series of 24” x 18” portraits are also a departure.  The first portrait served as a “template” of sorts, on an easel nearby for every portrait that followed to keep a discipline and consistency throughout the 28-piece series. With a very clear set of self-imposed parameters that include a limited palette, selfies of models unclothed from the sternum up, the continuity of shape in their human forms, and the white linen as backdrop, Anfinson removes the colorful background narratives and the required “uniforms” we wear— as builders, dreamers, secretaries, bakers, cops, nurses, and the like— to “get to the essence of who we are.”  The resulting bare simplicity is striking, offering an intimacy and immediacy the viewer cannot ignore. 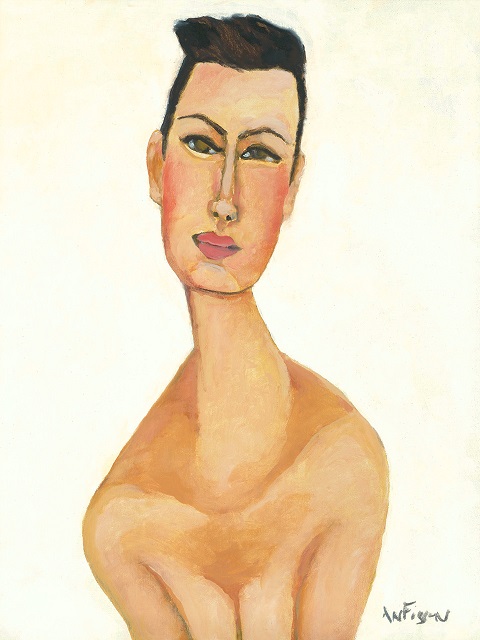 In addition to his work, a limited-edition box set of 7” x 5” archival prints of “I Am” will be available for purchase, along with TSKW Mega Raffle tickets for a chance at one of two Anfinson originals adorning artisan crafted wooden boxes filled with a bottle of single-batch rum from Key West First Legal Rum Distillery.

Anfinson’s exhibit is free and open to the public throughout the month of March. Sponsored by Rent Key West Vacations.  For more information, contact The Studios at 305-296-0458 or visit TSKW.ORG.  The Studios of Key West is located at 533 Eaton Street, with gallery and box office open Tues-Sat, 10am-4pm.