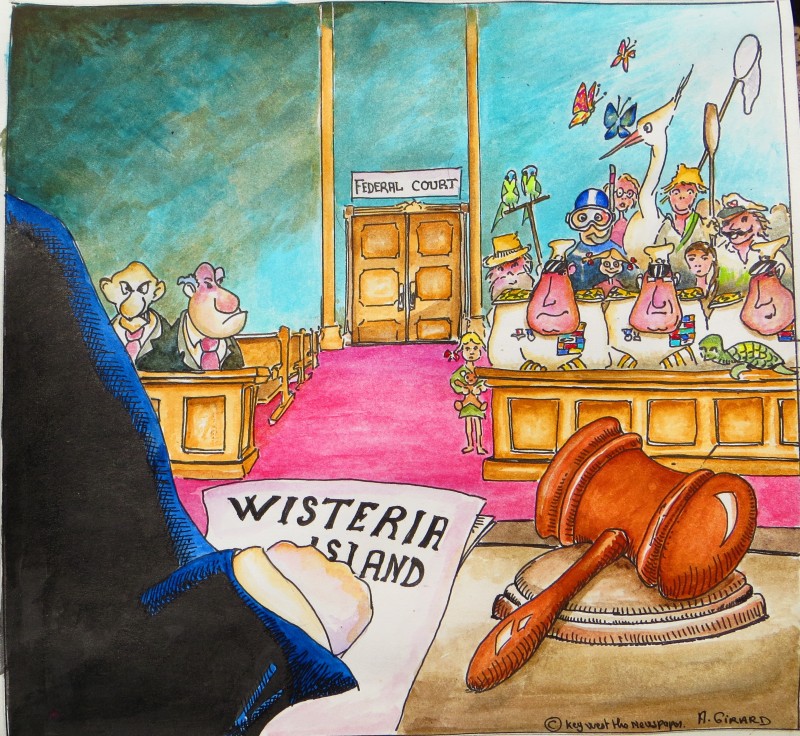 Finally, some movement in the Wisteria Island lawsuit.  It’s a hundred thousand dollar legal adaptation of

The controversy turns around what has become known as the “Navy’s claim.”  A 2010 attempt to build a large hotel complex, with private homes and a marina on Wisteria Island was shut down after The Blue Paper published a story revealing that Roger Bernstein might not be the true owner of the island.  The trouble began when we discovered a 1951 letter written by the US Navy claiming ownership of the island pursuant to an executive order of the President of the United States.

In spite of the Navy’s September 1951 objection, Florida sold the island to then State Representative Bernie Papy, Sr., “King of the Keys.” We alerted the federal government in 2011, and the United States Bureau of Land Management [BLM] later restated its claim to the island.  Roger Bernstein is now suing the United States in federal court in an attempt to get it back. 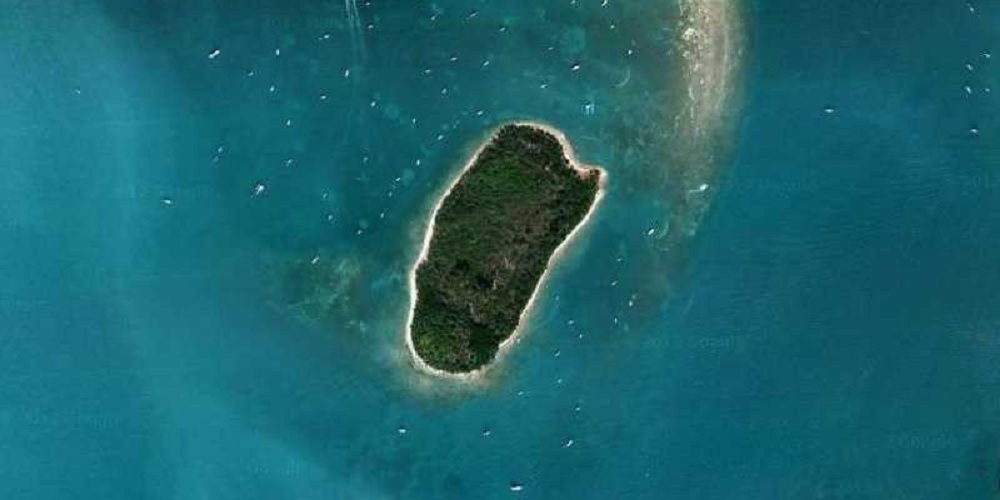 The island itself is truly a Key West character.  It was named after a steamer “Wisteria” that had shipwrecked in the 1920’s on Frankford Bank and is still visible on the west side of the island.  Wisteria Island provided sanctuary to a homeless teenager named Pritam Singh who grew up to be one of the most successful developers in the Keys.  The sand on its beach is still peppered with thousands of shark’s teeth from shark skinning operations that took place generations ago. Pushed by storm, Wisteria has slowly walked northeast with 1/5 of its acreage having crawled its way out of its original platted boundary.

So, who owns Wisteria Island, the federal government or the multi-millionaire Roger Bernstein?

It’s quite an extraordinary case where lawyers on both sides have dug into old dusty archives uncovering treaties signed with his majesty the King of Spain. Both sides argue about the meaning of executive orders, one signed by none other than Calvin Coolidge, President of the United States, who in 1924 reserved Wisteria Island and Frankford Bank for the exclusive use of the US Navy.  But the most odious character in Roger Bernstein’s pleadings to federal Judge Jose Martinez, one who comes back into the fray at almost every page, is the infamous reporter for The Blue Paper: Naja Girard.  There she is, using her amazing powers to bewitch the federal government into claiming the island as their own.  Bernstein even claims to give faith to a rumor of a picnic on Wisteria Island by Bureau of Land Management [BLM] executives. To defend against the 5-foot tall, 90-pound “anti-development” terror, Bernstein has hired the prestigious law firm, Greenberg Traurig, P.A. that defended George Bush against Al Gore in the 2000 election recount battle before the Supreme Court.

The following is the meat of the legal argument:

The first issue is the statute of limitations.  The QTA (Quiet Title Act) invoked by Roger Bernstein can only be used within 12 years of when the first person in the chain of title “knew or should have known” of a competing claim by the federal government.  Here the government produces a letter signed by the Secretary of the Navy in 1951 opposing the State of Florida’s sale of Wisteria Island to then State Representative Bernie Papy, Sr., “King of the Keys.”  The state went ahead and issued a deed to Papy despite the Navy’s claim, but required Papy acknowledge the risk that the title might fail.

Although they now admit that the state had no right to sell the island to Papy in January 1952, Bernstein’s lawyers argue that a year and a half later, in May 1953, the US government granted all submerged land, including spoil islands like Wisteria, to the State of Florida.

Thereafter, Bernstein argues, the US government never reasserted its claim – until 2011 –that is.  They point out that prior to 2011 the federal government acted as though it believed the island had legally passed into private hands and even considered buying it back at one point.  They have letters from the Navy discussing how much it would cost to purchase the island from Bernie Papy, Sr.

And this is where the intrigue begins.  What did Papy know and why did he rush to buy the island in 1952?

Between 1951 and 1952, a Navy plan to expand the Naval infrastructure out to Wisteria Island became a matter of public knowledge in Key West.  A February 1952 Key West Citizen article mentions large appropriations being made for the expansion of Truman Harbor.  Other news articles show Bernie Papy in and out of the offices of top Navy brass in Washington D.C.   Papy likely knew, better than anyone, of the existence of the expansion project that included the construction of a large fuel depot on Wisteria Island.

Blue prints for a project, which had been put in motion in 1952 [Project 13 for the Shore Station Development Program for 1954], show multiple pipe lines feeding the Seaplane Basin, Trumbo Dock and the Submarine Base at Truman Annex, from fuel tanks on Wisteria Island.    Bernie Papy would not have been the first politician to use his connections to take advantage of a government project.  He managed to convince the state to sell him Wisteria despite the Navy’s objection. He bought the island ahead of the major development breaking ground, thereby putting himself in a position to earn a sizeable profit from its sale.

Even if the state of Florida didn’t own the island in 1952, Representative Papy knew that a U.S. Bill that would transfer all of the submerged land to the states was well underway.  In fact, it passed the very next year as the Submerged Lands Act of 1953.  The SLA included spoil islands like Wisteria (and it would validate the sale from the state to Papy under the “after-acquired title” doctrine).

However, one thing Papy couldn’t have known when he bought Wisteria Island was that several months later, not long before the SLA was voted on, the Navy panicked and had language added to the Bill that protected several Naval base locations, including the Key West Naval Station.  Under a specific provision, the federal government would retain ownership of reclaimed lands that had been ‘built-up by the government for its own use.’  In other words, the Navy got the US Congress to set aside reclaimed land, like Wisteria Island, that the Navy intended to use for military purposes, for instance, as a fuel depot.

The point is, after the law passed and the ‘built-up for its own use’ exception became known, any reasonable purchaser of Wisteria Island ‘knew or should have known’ that 1] the federal government did ‘build-up’ Wisteria Island and 2) since the federal government was at the time of the SLA in the process of developing the island into a fuel depot, chances were that the ‘built up for its own use’ exception to the SLA would apply to Wisteria Island.  At that point a reasonable person should have sought to lift the cloud over his title.

But Papy was smarter than that, he didn’t take the risk of bringing attention to the situation.  He turned around and sold the proverbial ‘hot potato’ [for over 40 times what he had paid for it] to some innocent purchaser who a few years later sold it to Roger Bernstein’s father.

The judge could decide that Papy and his successor knew of the 1951 claim and should have worried about its survival through the ‘built-up for its own use’ exception.

However, if the judge decides that a reasonable man could rely on the government’s apparent abandonment of its claim to the island, he will then have to decide the second issue: whether the island was indeed transferred to the state via the Submerged Land Act of 1953 or whether the island falls into the “built up for its own use’ exception to the Act and still belongs to the federal government.

Roger Bernstein’s lawyers argue that the only reason Wisteria Island was created was to provide a convenient dumping ground for the spoil of harbor dredging operations.

On their side the government lawyers point out that the island was built up for two distinct purposes.  The first was to create a protective buffer against hurricanes and rough weather affecting Man O War Harbor and the Navy’s docks at Trumbo Point.  In fact, this was admitted by Roger Bernstein himself while testifying under oath at a quasi-judicial hearing before the Monroe County Planning Commission on May 26, 2010,  “Both Sunset Key … and Wisteria were created by planned dredging activities in Key West Harbor… They decided to deepen the harbor I guess for submarine operating depth but also to provide a buffer from the northwest and that’s why they were placed where they were placed.”

The Navy had initially requested a full jetty be constructed to protect the inner harbor, but in 1914, the Army Corp rejected the project as too costly agreeing however that some enhanced protection was needed and thereafter dumped fill to expand Frankford Bank to the south.  Wisteria Island began as a 25-foot high mountainous spoil area – the highest point in the Keys.   The protective barrier effect provided by Wisteria Island to Man O War Harbor and the Navy docks at Trumbo Point is an obvious proposition.

However, the government also claims that Wisteria was created and enlarged in contemplation of considerable expansion of the Naval base.

In 1908 the Navy planned the erection of a coal depot on Frankford Bank.

A 1917 blue print shows an airstrip, dry dock and other facilities were projected for Frankford Bank.

Finally in 1952, the Navy set in motion plans to relocate the Navy’s fuel storage areas to a large fuel depot on Wisteria Island.  The detailed plans show various pipelines extending from fuel tanks on Wisteria Island feeding the Seaplane Basin, Trumbo Point Docks and the Submarine Base at Truman Annex.

The pleadings filed by both parties are called Motions for Summary Judgment.  Both sides have laid out detailed arguments in the hope of convincing the Judge to rule on the basis of their view of the irrefutable, factual truth. But in so doing they’ve made it plain how intricate the facts truly are in this case.

And there sits Wisteria Island. Doesn’t that crazy lady deserve to have us all sit in a cool courtroom listening to reports on the King of Spain, shark skinners, homeless millionaires, and US Presidents?

9 Responses to “Wisteria Island: The King of Spain and Roger Bernstein”