As with any calendar day chronicled on Wikipedia, November 26 sports a long list of distinctive events that happened on this date, beginning with the imprisonment of Asturian queen Adosinda in 783 and ending with the launch of the Mars rover Curiosity in 2011. Out of all these moments in time, the one that caught my eye was this from 1977: “An unidentified hijacker named Vrillon, claiming to be a representative of the ‘Ashtar Galactic Command,’ takes over Britain’s Southern Television for six minutes, starting at 5:12 p.m.” Apparently, Vrillon overrode the station’s audio signal during the evening news with his own signal to offer two warnings to earthlings: 1) “All your weapons of evil must be removed,” and 2) “You have but a short time to learn to live together in peace.” Ironically perhaps, Vrillon ended his six-minute-long pronouncements “shortly before the end of a Looney Tunes cartoon.” Why the station kept broadcasting during all this remains a mystery. Either it was in collusion with Vrillon or Vrillon stole this prologue from The Outer Limits to freeze everyone into powerless inactivity:

Evidence for Vrillon’s obsession with The Outer Limits rests in the show’s first episode, titled “The Galaxy Being.” In it, a radio station owner “inadvertently makes contact with an alien from the Andromeda Galaxy on his 3D television [the human’s, that is].” 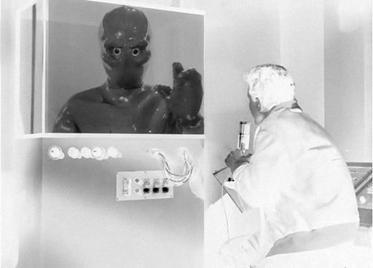 Through a series of unfortunate events, the alien is accidentally sucked through the radio transmitter to earth from Andromeda. We try to destroy it, of course, mostly because the “natural” microwave radiation it gives off kills or injures several people. The alien, who earlier told the station owner that it was forbidden to contact humans because “you are a danger to other galaxies,” is not harmed by our attacks but it is a little annoyed. It destroys the offending radio transmitter, warning us that “There are powers in this universe beyond anything you know…. There is much you have to learn…. Go to your homes. Go and give thought to the mysteries of the universe.” In a demonstration of the wide gap between fiction and reality, the pitchfork-and-torch crowd does just that. Well, at least they quiet down and return to their abodes. Whether they ponder mysteries is an open question.

After they’ve left, the alien announced that, since it has violated the galactic law about coming anywhere near us, it cannot return or even phone home. Instead, it turns down its “microwave intensity which causes it to fade from the Terran realm.” The episode closes with this voiceover homily:

The planet Earth is a speck of dust, remote and alone in the void. There are powers in the universe inscrutable and profound. Fear cannot save us. Rage cannot help us. We must see the stranger in a new light – the light of understanding. And to achieve this, we must begin to understand ourselves, and each other.

In similar fashion, Vrillon told his listeners that our planet was entering the Age of Aquarius, which could be a time of peace and evolution for them. He ended with this instruction:

Have no fear, seek only to know yourselves, and live in harmony with the ways of your planet Earth. We of the Ashtar Galactic Command thank you for your attention. We are now leaving the plane of your existence. May you be blessed by the supreme love and truth of the cosmos.

It surprised me to learn (and probably shouldn’t have) that the Ashtar Galactic Command is a real thing. The AGC is described as a UFO religion. Its members believe they are a “cosmic ground crew” whose mission is to protect humans from themselves by, to stay with the Age of Aquarius, “letting the sunshine in.” I have to say that, so far, they are falling down on the job bigly.

I do see a slim hope in all this, however. Apparently, the AGC guys know how to “leave the plane of our existence.” Maybe they even have a ray gun that can cause selected earthlings to “fade from the Terran realm.” This might be extremely useful right now. I will investigate further. The next time I’m at Publix, I will visit the cereal aisle and check the back of every box there. If I find an offer for said “intergalactic fade-awayor,” I will order it and report back…well, I will, that is, as long as it’s no more than $0.99, shipping included.

Image: Still from “The Galaxy Being” episode of The Outer Limits. Fair use.