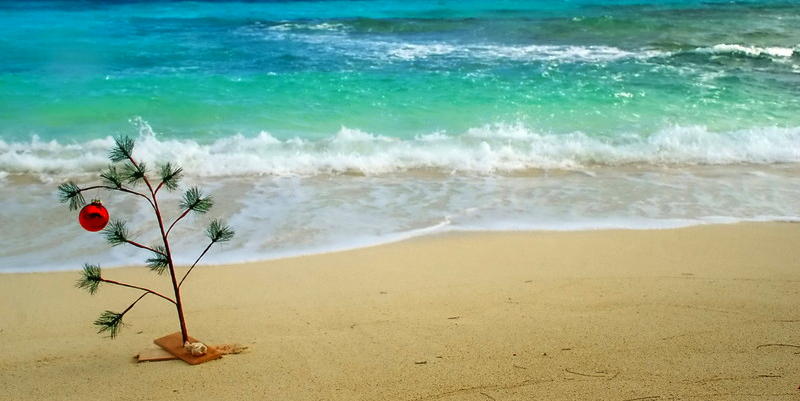 I am sure you have noticed them lying there, alone and forlorn at the side of the road. I don’t know about you, but I feel a twinge of guilt as I pass by and wonder if it could have worked out differently somehow. Was there something I could have done to help, some Good Samaritan-like act that would spare the carnage and shame?

There’s just something about a naked and abandoned Christmas tree lying in a ditch that makes us all a little uncomfortable. For a brief and glorious time those green firs and pines are the honored guests in our homes. We feed them and dress them and illuminate them and sit and admire them. Then, alas, their blaze of glory sputters and we give them the old heave-ho along with the crumpled wrapping paper and less-than-curly ribbons. Somehow, the treatment just doesn’t seem right….and yet all this talk is bringing back memories of Christmas trees past.

Years ago in Key West, Christmas trees were not so easy to come by. Shipments would arrive about a month or so before Christmas and then immediately sell out. There were never enough trees to go around; the people who sold them, no doubt, didn’t want to get stuck with any extras. If you didn’t claim yours early, you were out of luck.

Once, in the late 1970s, we missed out, even after searching everywhere. By Dec. 23, we knew all hope was gone. I think Frank Zappa once said something about necessity and inventions. The necessity for invention, or at least improvisation, was upon us.

I am sure you know that some of the islands in the Lower Florida Keys have stands of what might be called “pine trees.” Upper Sugarloaf Key is one such island. We crossed the Cow Key Channel bridge northbound while visions of Christmas trees danced in our heads. With our trusty (and rusty) handsaw by our side, we soon crossed the shortest bridge in the Keys, the one over Harris Gap Channel. The almost-scent of the piney woods greeted us. We turned left onto Sugarloaf Boulevard and soon encountered dirt roads named after infamous pirates. This was the place. A quick pirate raid, and we would be on our way home with the cherished booty we desired.

From a distance, the vast forest really looked as if it contained real Christmas trees. But up close, they resembled Christmas trees’ undernourished, scrawny cousins. We searched and searched but alas, not a single tree sported enough greenery or foliage to even remotely pass for a Christmas tree. But then….Frank Zappa kicked in again and we knew what we would do.

We cut down two of the weakling cousins and intertwined their branches, doubling the effect to one of nearly passable un-scrawniness. (Fade to memories of my friend’s sister, who used to stare cross-eyed at the Christmas tree because, in her words, “it has twice as many lights this way!”). Soon we were back on the paved roads humming “O Tannenbaum” and imagining our skinny shrubs bedecked with oodles and oodles of tinsel and lights. We knew that the thin branches would bend and droop under the weight of even the lightest decorations. But we also knew that somehow we had saved Christmas.

The trees were not so sure.