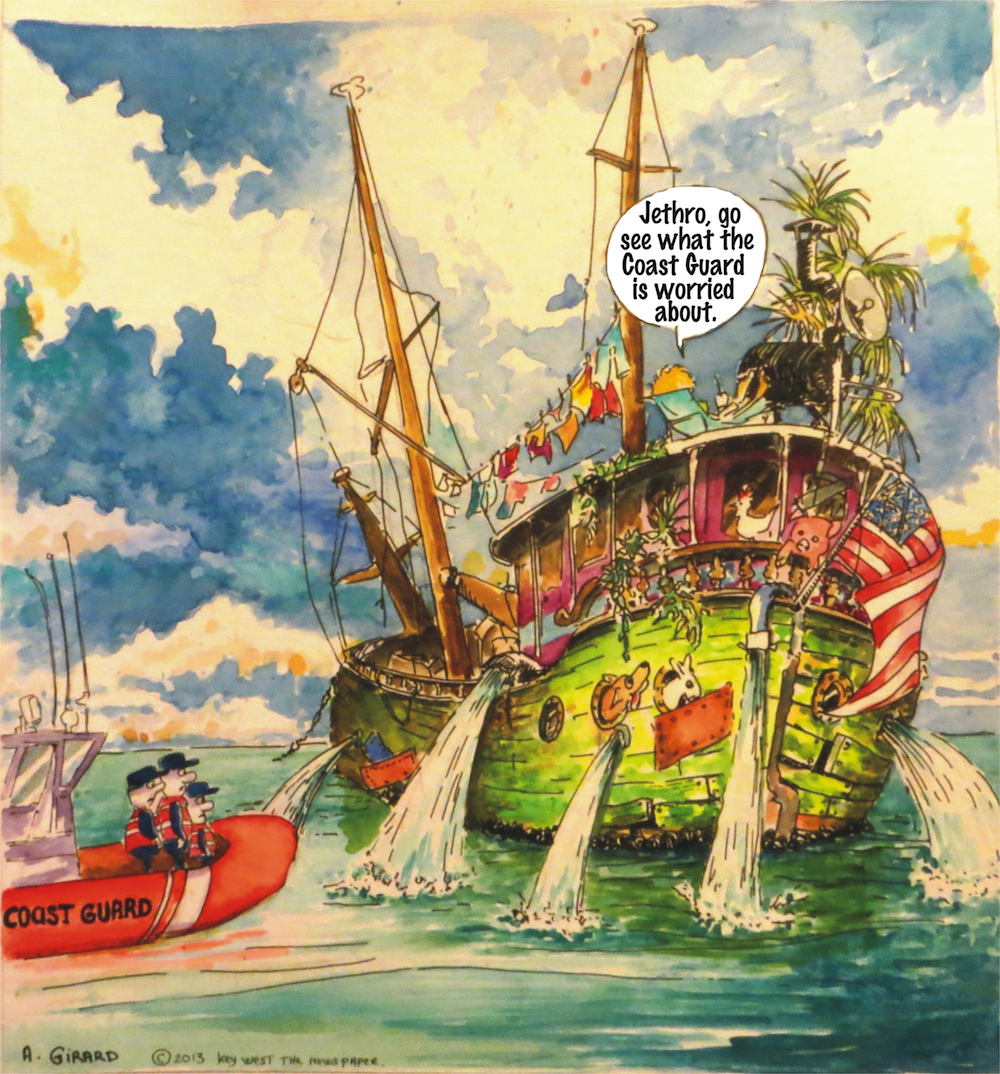 “You gotta get me off this thing! I don’t want to drown out here!  And my dogs!  We don’t have a dinghy!”

It’s five o’clock in the morning.  The woman crying on the phone is Sonia Eliott who is stranded on a sinking boat near Wisteria Island.  Actually, as we write this, she is still on the rotten 45’ wooden sailboat after mariners from neighboring boats managed to reduce some of the flooding.

The mystery here is:  Where did that boat come from?  It appeared only last week, ‘tied itself’ to another sunken boat and made three distress calls in two days.  With its rigging dismantled and no engines, obviously it couldn’t have come from very far.  So, where did this boat and the five people and two dogs come from and for that matter, where do all derelict boats that show up on our shores come from?

Part of the answer can be found in the fact that rather than paying the costs of destruction and removal of an unwanted old boat some owners are tempted instead to “donate” their floating [or not] junk to a homeless person directing them to go anchor somewhere offshore. And that’s how Sonia, who had never stepped foot on a sailboat in her life, ended up the unfortunate owner of a 45 footer which three days later was sinking rapidly behind Wisteria Island.

The boat, she said, had been abandoned in dry storage for years.  The owner owed $ 6,500 in back storage fees but the boat yard was going to put the boat back in the water for free as long as she left with it right away.

“While they were putting the boat in the water they were taking bets on how long I was going to stay afloat,” says Sonia. “I couldn’t understand – the boat was so nice inside,” says Sonia, who admittedly knows nothing about boats.  “It started to take on water right away, but they said I had to leave immediately.”

At sunrise last Tuesday she was telling her story to the US Coast Guard crew that came to rescue her.  There was palpable indignation on the part of the Coast Guard.  Obviously people dedicated to saving lives don’t have much respect for boat yards that throw a family at sea on a sinking boat just to save a few dollars in disposal fees.

Then Florida Fish and Wildlife (FWC) got involved.  FWC is the state’s marine police.  The situation evolved into a kafkaesque Catch-22.  The Coast Guard wanted her off the boat because the boat was unsafe, but the FWC said they would charge her with abandonment of a derelict vessel if the boat sunk – which would necessarily happen if she was not aboard to man the pumps.

“I am stranded on this boat, I am going to lose my job at the laundromat,” says Sonia, “but if I leave, the boat is going to sink and they are going to arrest me and what would happen to my dogs?”

Certainly, as FWC’s Captain Dave Dipre told us, “She made a very bad choice” in agreeing to take over that boat.

So, how will it end?

Is the boat going to keep flooding, get so heavy that it will break its mooring, run into a neighbor’s boat creating another derelict?  Will it pass through the anchorage one night without waking up anyone not even Sonia who will find herself in 12-foot seas in the middle of the Gulf Stream with little chance of survival? Or is the boat going to sink right there at the anchorage costing anywhere between fifteen and twenty-five thousand dollars in removal and disposal fees charged to the taxpayers?

In this last– ‘happier solution’ – of course the owner would have spent 30 days in jail and will no longer be able to register a motor vehicle until she reimburses the County.  In the past, the County has spent nearly $ 225,000 in just one year on derelict vessel removals.

None of these scenarios are fictional.  People who have lived on the water have seen it happen over and over.

“It’s a constant problem,” says Jeff Sundwall, who lives behind Wisteria Island on his sailboat.  Sundwall is directly downwind from Sonia’s boat.

“That thing could destroy my world,” he says.  “The real culprits are the people who donate those derelict vessels to landlubbers.   Some of us have spent hours helping this lady out, pumping, diving, patching the holes.  But right now, even with all the good will in the world from neighboring boaters there is no solution.  She’s got no money to fix a boat like that and no boat yard is going to take it out of the water without a huge deposit to cover disposal costs – in case she abandons it.”

“Typically, I will require around $ 5,000 deposit before hauling out an old wooden boat,” says Ricky Spencer who owns Spencer’s Boat Yard in Key West.

“Actually we had an old live aboard Chris Craft break in two as we were lifting it out of the water this week.”

But there may be a solution:  Instead of concentrating on the ill-advised landlubber, law enforcement could consider all parties involved.  If it is a crime to store a derelict vessel on the waters of the state, certainly the “free” crane service provided by the boatyard and quasi-free boat generously offered by the ex-owner directly contributed to the crime.  These people knew better than anyone that the boat wouldn’t float, yet the deal was that she had to have the boat put in the water within 3 days.

In this entire affair, the yard and the ex-owner are the only direct beneficiaries of the operation of storing a derelict vessel on state waters.  The statute, by the way, doesn’t require that the owner be the only one responsible.  The statue says “any person” who stores or abandons a boat is criminally liable to the state.

So, aren’t the boat yard and the ex-owner accomplices in the crime?  It seems obvious, that their intent was never to conduct a good faith sale of a boat, but rather to evacuate their problem onto state waters, knowing very well that the County would ultimately be footing the bill for the removal costs.

Shouldn’t ‘The Law’ force them to take the damned thing back and out of the water?  As a matter of public policy, if law enforcement could adopt such a stand, owners of derelict vessels would no longer be able to unload [with impunity] their problem onto the backs of insolvent people [and ultimately the taxpayers] and a serious part of the derelict vessel problem will have been solved.

Reportedly the Chris Craft which broke in two at Spencer’s Boat Yard was hauled out thanks to the generosity of the management of Harbor Shores who paid the $5,000 deposit.  Bill, the elderly man who was living on the boat is being taken care of by the hotel and management is looking for another boat to settle Bill back aboard.  So, obviously, while some businesses are handling derelict vessels very poorly, others are  performing amazingly good-hearted deeds.