First out of the chute in the mayoral candidates part of Hometown PAC’s August 4 forum, US 1 Radio News Coordinator Bill Becker said he called the Alabama Bar Association and they said they had no record of Sloan Bashinsky ever having practiced law in Alabama. You can watch and hear that and my answer by opening Hometown’s link, starting a little after the 1 hour and 10 minutes mark.

I called Cathy Sue back and told her the above, and she said, yes, they showed Sloan Young on their records, and for me to send her the name change documentation from Sloan Young back to Sloan Bashinsky and she would update their records.

I went to the Monroe County Clerk Office on Whitehead Street and obtained certified copies of the name change document, then I FAXed copies of same to Cathy Sue, who emailed back: “The fax successfully arrived and I have duly noted the name change in our data base.”

Because Gwen Filosa reported in the Citizen the day after Hometown’s forum that Bill Becker had said the Alabama Bar had no record of my having practiced law in Alabama, on August 7 I emailed the Citizen, copy to Gwen, a letter to the editor explaining the above, and the dates I had reported it at my website: wwwgoodmorningkeywest.com. As of today, August 13, the Citizen has not published my letter.

Another ambushy part of Hometown’s candidate forum was the livestream video had no audio, and then Hometown’s volunteer IT volunteers had a dickens of a time preparing the video, with audio, for later viewing – the video kept crashing. Finally, a video with audio was achieved, but the audio cut out after mayor candidate Margaret Romero’s closing remarks, just as Mayor Craig Cates was to do his closing remarks. I went last, so there is no audio of my closing remarks, either.

I told Naja Girard yesterday, August 12, that I received earlier yesterday an email from Hometown PAC announcing its video of the event was available at its website, www.hometownkeywest.com, and stating, “There is some lost audio in the Mayoral Question and Answer segment but that’s a problem that will be fixed by the time of the August 18 forum.”

I told Naja that was too long out, early voting started August 11. Naja suggested I write up what I said during closing comments, and she would publish it. I said, during the forum I wrote down some bullet points to cover in closing remarks, and I would try to write from memory what I said on each point.

I said the Chamber of Commerce’s president Dr. Robin Lockwood said at the Chamber’s channel-widening forum last year that the dirtiest worst possible cruise ships were calling on Key West. During the next referendum forum, Dr. Lockwood denied he had said that, after I asked him about it. Jolly Benson, sitting out there in the Hometown audience tonight, said he heard Dr. Lockwood say it, and Jolly asked if anyone else heard Dr. Lockwood say it, and about twenty hands went up. If elected, I will try to get the dirtiest worst possible cruise ships stopped from calling on Key West.

I said physicians and divers down here know the ocean down here is infested with MRSA bacteria. If you nick yourself shaving your face, under your arm or your leg and then go into the ocean, you have a very good chance of contracting MRSA, and then fighting for your life. Our visitors are not told this, and they need to be told what can happen to them if they go into the ocean with a nick or cut on their skin. 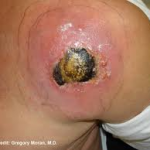 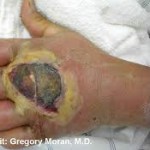 (MRSA images, for blue paper readers who do not know about MRSA, which is a mutated antibiotic-resistant strain of staphylococcus bacteria, aka staph infection.)

I said, if elected, my first official act as mayor, on behalf of Key West, will be to apologize to Charles Eimers’s children for the KWPD killing their father last Thanksgiving Day.

(Hometown’s panel asked no questions about KWPD or Charles Eimers.)

I said, if elected, I will do all I can to try to get as much actually affordable rental housing put on Truman Waterfront as possible, instead of a new park costing around twenty million dollars, which is supposed to pay for itself, but you will end up paying for it. That was the second time during the forum I pushed for actually affordable rental housing on Truman Waterfront.

I said, if you want to know what’s really going on in Key West, read Key West the Newspaper and goodmorningkeywest.com. Quite a few heads in the audience nodded.

The day after the forum, I found myself musing that what I had said and done during the forum, I sometimes snuck in facial expressions and hand gestures when Margaret and Craig were talking, reminded me of a trial lawyer being ambushed at the beginning of his case and not batting an eye and turning the case into a death-defying sometimes humorous presentation to the jury – Hometown’s audience.

I told Naja there is a cosmic reason Craig Cates’ and my closing remarks can’t be heard in Hometown PAC’s video replay, but I don’t yet know what the reason is. Maybe someday the angels will tell me the reason.

The reason Hometown’s video had no audio during the livestreaming, and then the video kept crashing, was Hometown had two cruise ship lovers on the panel, John Dolan-Heitliner and Jennifer Hulse. I have on high authority that the angels did not like those two being on Hometown’s panel.