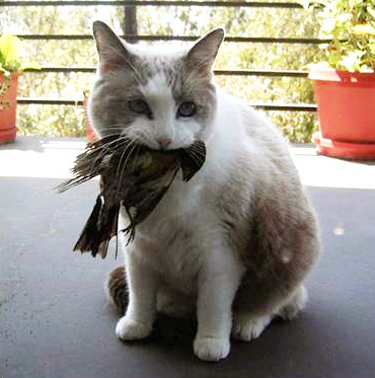 That’s what Amanda Margraves at the Florida Keys Wild Bird Center in Tavernier hears over and over again. Margraves, who is the hospital manager and wildlife rehabilitator at the site, estimates that 50 percent of the injured baby birds they take in arrive as a result of cat attacks.

What’s most disturbing is that many of the birds are eaten or injured by domestic cats that are allowed to roam freely. Feral cats also eat young birds as well as other animals that may include endangered species.

The story is an old and vexing one but became relevant again recently because of the well-publicized financial problems encountered by Marathon-based Forgotten Felines. The group found itself in serious difficulty and had to suspend its efforts. However, they staged a pledge event this summer and raised enough, including a match from Turtle Hospital founder Richie Moretti, to revive a suspended trap/neuter/release program and will be able to continue to provide stray and abandoned felines with food and veterinary care.

It may surprise some to discover that the organization feeds more than 500 stray and abandoned cats every day.

While many would applaud Forgotten Felines’ efforts to protect cats, others have serious concerns about the damage that felines do to wildlife. The non-profit’s efforts raise complicated issues about weighing the welfare of house pets against the ecosystem in which they live.

Feral cats are the offspring of abandoned household pets released by people who don’t want their cats or kittens. Because they are raised without human contact, these animals quickly revert to a wild state and form colonies wherever food and shelter are available. Municipal and county licensing agencies deal with dogs but there are no requirements for keeping cats inside or leashed.

According to National Geographic some feline experts now estimate 70 million feral cats live in the United States, the consequence of little effort to control the population and of a cat’s ability to reproduce quickly. That feral cat population is in addition to the 84 million domestic cats, many of which spend their days or nights outdoors.

Smithsonian scientists released a report in January indicating that free-ranging domestic cats kill far more birds than previously believed: between 1.4 and 3.7 billion birds annually in the lower 48 states. The report, based on 21 studies of cats and birds in the United States and Europe, showed that cat predation may well be the greatest source of human-related bird mortality in the country.

According to Monroe County Biologist in the Department of Planning & Environmental Resources Michael Roberts, feral domestic animals pose a very real threat to Key deer and to the Lower Keys Marsh Rabbit and juvenile silver rice rat, both of which are endangered species.

“In the Key Deer Wildlife Refuge feral domestic cats are a significant non-native threat,” he said. “They are indeed a recognized pressure on native wildlife.”

Well-known Marathon veterinarian Douglas Mader was quoted on the Florida Fish and Wildlife website as saying that, “A thorough and enforceable Integrated Pest Management Plan is crucial to the near term and long term survival of the delicate ecosystem here in the Florida Keys. A single feral cat or wild constrictor snake can have devastating consequences to the small mammals and birds.”

So what’s the solution? Is the trap/spay/neuter program working? Roberts says that it would if the cats lived in a controlled and closed area.

“The research that I have seen coming out of wildlife publications indicates that it is not terribly successful mostly because the populations tend to be supplemented from an external source. If people continue to put stray cats into that population it doesn’t shrink.”

In other words, people continue to release unwanted cats and kittens.

“I think for starters we need to educate people about how many birds their outdoor cats catch and kill. So it isn’t just the feral cats that are the problem.”

A study published in the respected science journal Nature recommends that pet cats should not be allowed to prowl around the neighborhood at will, any more than should a pet dog, horse or potbellied pig. It went on to say that cat owners who insist their felines “deserve” a bit of freedom are being irresponsible and ultimately not very cat friendly.

Recent projects like Kitty Cams at the University of Georgia, in which cameras are attached to the collars of indoor-outdoor pet cats to track their activities, not only show cats preying on cardinals, frogs and field mice, but also they have been shown lapping up antifreeze and sewer sludge, dodging under moving cars and sparring violently with much bigger dogs.

Margraves loves cats and would never want to see them euthanized. And yet she too is skeptical about the trap/spay/neuter approach.

“I have five cats. I love cats. Is [the trap/spay/neuter program] really going to solve the problem? If people aren’t educated and they are still not spaying and neutering their pets, you’re going to get the same problem over again anyway. We’re a chain of islands and you would think that of all places we could get this under control.”

So, by law, while dogs must be kept inside or on leashes there are no such restrictions on cats. It’s true that dogs can be a danger to humans but, clearly, cats are a serious threat to the entire ecosystem and ways need to be found, particularly in the Keys, to control their population and behavior.