by Arnaud and Naja Girard……

As a hundred or so residents begin packing in view of their upcoming eviction from the defunct Simonton Street Trailer Park, one wonders what has done-in the small village tucked beneath those shady trees.  The City Commission voted last Tuesday to approve Joe Cleghorn’s redevelopment plan, which includes cutting down 40 of 45 trees and removal of all 44 low-income trailers.

Doesn’t the City have regulations protecting affordable housing and why did the Catholic Church, the previous owner, agree to sell to Cleghorn, despite the quite predictable social hardships that evictions would cause?

This is a classic tale of gentrification and as the story goes, this one has it all:  distressed nuns, questionable Monsignor, pedophilia scandals, Canon Law, ghostly electric meters, suspicious property tax documents, elementary school children, a Wall Street tycoon, and to top it all off, local regulations out of a Kafka novel.

The sale of church-owned real estate is not new to Key West.  The Reach and Duval Square were built on land sold by the Catholic Church.  But such sales have become increasingly controversial across the nation.  Most church-owned land, you see, was donated, at one point or another, by parishioners who did so with an expectation of some charitable use.  But the Catholic Church has now racked up over 2 Billion dollars in sex scandal settlements and the money has to come from somewhere.

By the time the Simonton Street Trailer Park was put up for sale, the Archdiocese of Miami owed $ 26 Million in sex abuse and pedophilia settlements, after priests confessed to having molested children including a 13-year old altar boy named Mark Foley, who later became a US Congressman. In various congregations, people have come forward saying in essence, ‘How dare you sell the land my family gave you to pay for your sex scandals?’

The Church’s desperate need to liquefy real estate has renewed interest in an obscure code dating back to the Middle Ages called Canon Law, the law that regulates the Catholic Church.  Canon 1300, for instance, couldn’t be clearer: the intentions of those who give to pious causes must be carefully observed.   So, of course, the million-dollar question is always, ‘how did the Church end up with a particular property and what will it be used for after its sale?’

It’s easy to see how the Church could find itself in a public relations nightmare when selling donated property to pay off rape victims.  What to do?  Enter the “eminence grise”:  very well connected people who would assist the Catholic Church in discretely divesting themselves of property while keeping up with appearances.  One of the most famous of these individuals certainly was Raffaello Follieri , the quintessential Italian playboy, dating actress Anne Hathaway, rubbing elbows with Bill Clinton and wheeling and dealing with the Vatican.  Back in 2007, he was scheming to acquire some $ 350 Million of church property.  What’s interesting for us is the guideline that was approved by the Vatican for sale of property to the Follieri Group:

“ensure that these properties [are] converted to uses that would … contribute to their communities in a socially responsible fashion consistent with the ideals of the church.”

According to some, Canon Law requires that the church only sell to those that plan to use the property for good works such as orphanages, schools, homeless shelters.

Follieri was, in fact, a penniless Barry Lyndon living on credit in an apartment house at Trump Towers.  In a sordid twist straight out of ‘The Sopranos’ he and some associates linked to the mafia were arrested for embezzlement.

So, was the sale of the Simonton Street Trailer Park justified under Church guidelines?  We can’t find any trace of a public advertisement of the sale but we do know the architect of the deal is a man named Peter Batty.  Interestingly enough Batty has a foot in both worlds, he’s both the Deacon of St. Mary Star of The Sea Church and the head of Spottswood’s SBX Commercial Realty company.

“We had no idea the trailer park was for sale,” said a very involved St. Mary’s parishioner who asked to remain anonymous, “We were told, after the fact, that it was for the best because the trailer park was not making any money, that the Basilica School was broke and would get the interest on the money generated by the sale.”

And indeed, documents furnished by the property appraiser describe the Simonton Street trailer park as a charitable pit.   In mid July 2007, the Church claimed there were only 18 trailers on the property, most tenants were paying no rent, and that what little income there was went to the school and requested that the property receive a property tax exemption.  However, when we cross referenced the data with Keys Energy meter accounts for the Simonton Street trailer park, we found that 23 meters were active at that time, with certain meters obviously servicing more than one dwelling.  According to Mike Rison, who moved into the trailer park on September 1, 2007, only 12 [of 44] spaces were empty, he and others were paying $500/month to the Church and the trailers that were there all appeared to be occupied.

In April of 2009 Cleghorn’s Southernmost Cabana Resort paid the Archdiocese a $ 480,000 down payment on the $ 2.4 Million closing price for the trailer park. The balance of $ 1,920,000 plus interest was to be paid in monthly $ 8,800 installments with a balloon due on April 30, 2013.  The Archdiocese of Miami has refused to reveal whether the final payment has been made.   Cleghorn has a plentiful history of foreclosure suits with banks on previous land deals including BB & T, Penny Mac, First State Bank, Branch Banking Trust, Citibank, Flagstar Bank, and Centennial Bank. Obviously the trailer park could have produced much more cash for the school than the interest payments offered by banks these days.

The Archdiocese and the developer kept up a pretense, claiming the property would continue to be used for affordable housing.  Nothing too serious, of course, if they had meant it they would have agreed to a deed restriction.

Cleghorn now says that the City forced him to give up the trailer park by refusing to grant him a 25’ X 248’ easement adjacent to the one-acre parcel.  So, unfortunately, Monsignor, the trailer park is going to have to be redeveloped …  And by some strange coincidence the modular homes that will replace the trailers are fabricated by none other than Cleghorn himself.  God does work in mysterious ways.

So, for $ 480,000 in quick cash the Archdiocese of Miami threw those living at the trailer park under the bus.  And the school?  The school was saved by an actual act of God, literally… Hurricane Wilma.  The storm picked up the 158-foot yacht owned by Wall Street tycoon Peter Halmos and plunked it down in 1-foot of water in the middle of the Calda Bank.  While stuck in the mud for two years Halmos fell in love with Key West and bailed out the Basilica School at St. Mary’s.

“I felt so bad for the nuns,” says a local fisherman who had two kids attend St. Mary’s, “there was no electricity for the AC, their food was so lame and depressing I started to bring them fish.”  So, what ever happened with the money from the trailer park?   The Church has refused to answer our questions.

In Miami some parishioners grew so frustrated with perceived corruption in the way the Archbishop had been handling church affairs that they created an action group called the “Christifidelis”.  The group, headed by attorney Sharon Bourassa, conducted an investigation and strongly supported a former priest’s suit against the diocese. The accusations point to Monsignor Favalora, [he signed the Warranty Deed for Cleghorn] who at the time was the Archbishop of the Archdiocese of Miami having jurisdiction over the Key West parish.   The Christifidelis tell a sordid account of financial misdeeds, nepotism, alcoholism, sexual abuse, voyeurism and priests living a life of luxury.  There is a claim that these accusations lay behind the sudden resignation of Archbishop Favalora in 2010.

“I don’t care what you guys say. It’s a nice place to live,” said Jeep Caillouet, to the City Commission about the trailer park, “It’s got the biggest trees in town.  There’s no drugs over there that amounts to nothing.  It’s a nice neighborhood.  I hate to see it go.”

In less than a year’s time Key West has lost workforce housing at a record pace.  First it was over 100 units at Peary Court, then the 230 or so with expiring deed restrictions and this past Tuesday another 44 units at Simonton Street Trailer Park were put on the slab. Key West does have an ordinance requiring 30% of newly constructed housing to be dedicated affordable housing, but somehow lately every project seems to have its own particular reason as to why it should not apply.  For Peary Court and now the Trailer Park, the developments were not considered “new construction” even though both development plans call for total demolition and all new structures.

The ordinance seems convoluted.  When Ed Swift built the condominiums at the Steam Plant he provided 30% affordable housing.  Why is he the only developer who doesn’t threaten to sue the City over having to follow this law?

“If we keep applying this logic,” said Commissioner Tony Yaniz who voted against the development plan, “imagine if Stadium Trailer Park went away.  What are you going to do then?   Where will we get our workforce from?  Miami?“

Commissioner Teri Johnston, who called for a revision of the ordinance, agreed,  “We are losing so much of our affordable housing and we need to replenish it and everything that we are doing is going in the wrong direction.”

“The workforce housing ordinance needs to be revised,” said Commissioner Lopez, who lamented that the law does not clearly obligate Cleghorn to provide any affordable units,  “I twisted the developer’s arm beyond what I could do legally, but still got him to agree to do things that he was not legally required to do,” said Lopez who successfully pushed for a written provision requiring Cleghorn to either find the current tenants another place to live or to compensate them with $ 2,500.   Lopez, who reluctantly voted in favor of the development agreement, pointed out that, “The City Planner warned (with the City Attorney nodding in agreement) that to vote against was to invite a lawsuit.”

Commissioner Rossi without a word simply voted, “No.”

What is the logic behind forcing “new development” to provide 30% affordable housing, while allowing existing workforce housing to be 100% gentrified?

“I love this City and I don’t want to leave,” said Jeep the banjo player to the Commissioners,  “Somehow, maybe, you guys can figure out how to keep people like me and others in this community.” 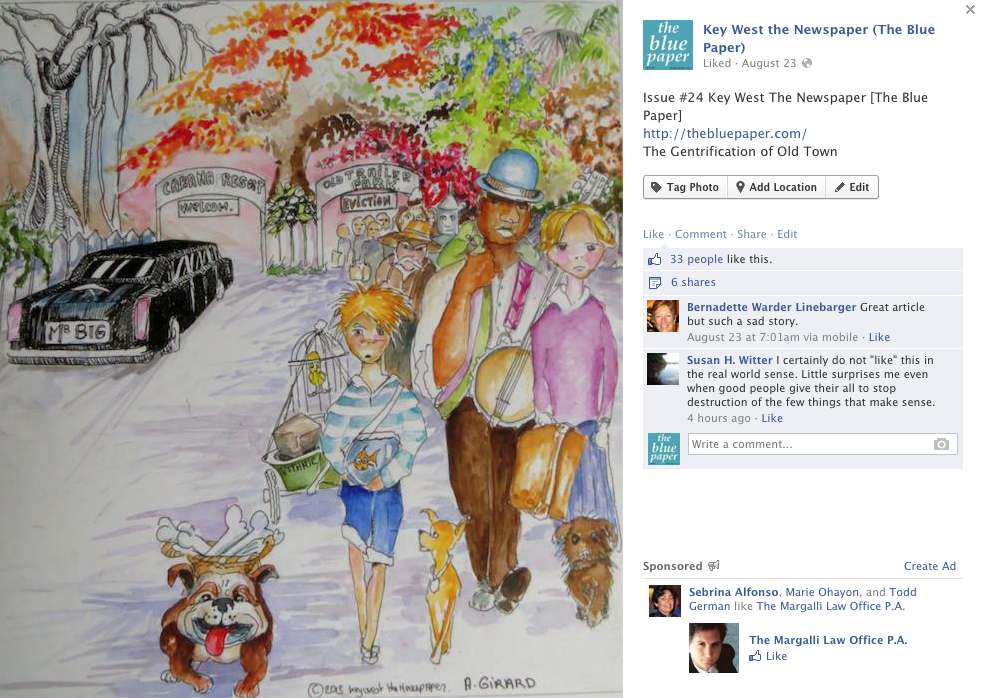 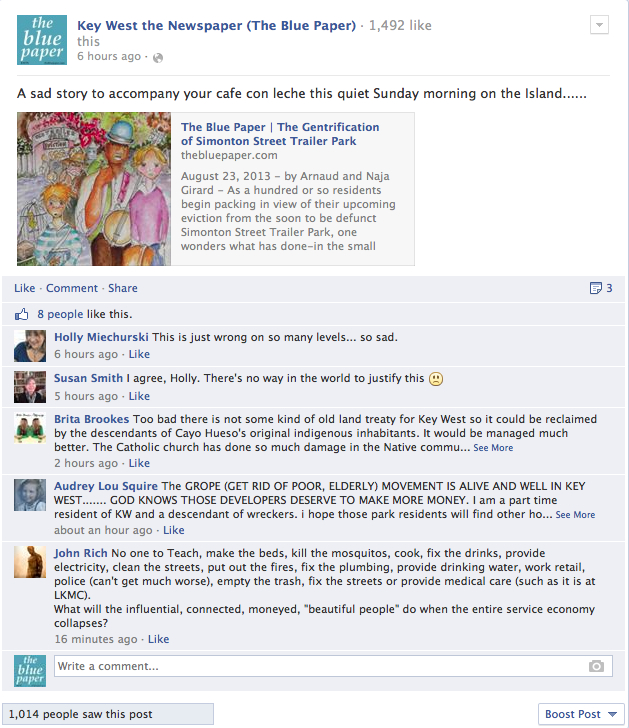