When Charles Eimers turned blue and lost consciousness while in the hands of Key West police officers on Thanksgiving morning, KWPD was informed immediately by Lower Keys Medical Center staff that Eimers would never leave the hospital.  Chief Lee decided to treat the case as a ‘death-in-custody situation’, which meant FDLE had to be called in to investigate.

Lee didn’t make the call himself, though; he asked one of his officers, Captain Scott Smith to do it.  Captain Smith did make the call and FDLE’s Chief investigator Kathy Smith took on the case. You might notice they have the same last name and think there’s some connection there, and well, you would be right.  On Thanksgiving morning after Charles Eimers virtually died on the beach, Captain Smith called his wife, his ex-wife, in fact, at FDLE.  Kathy Smith is now investigating the father of her child[ren].

What did he say?  How did KWPD report the circumstances of the arrest of Charles Eimers to FDLE?  This is something FDLE has obstinately refused to reveal, but we can make an educated guess.  They said:  ‘Charles Eimers got out of his car and proceeded to flee from the police while running on the beach away from law enforcement and Eimers collapsed.  Eimers was found without a pulse by police.  He was given CPR.  EMS was called.’

Why do we think that’s probably what was said?  Because that is – word for word – what KWPD told medical personnel who came to save Eimers’ life.  That, of course, was a fairytale.  Thousands of people have since seen the video, caught by a bystander, which shows Eimers complying with the police prior to the violent arrest. What are the chances that the KWPD told a different and true account to FDLE that same morning?

FDLE’s Kathy Smith is now in a pickle. She has to investigate, not only what happened during the Thanksgiving day arrest, but also what is now clearly an attempt at a cover-up which may or may not involve Captain Smith; someone very close to home.  Maybe the first report to FDLE was as much of a fairytale as what was said to the doctors at the hospital.  Maybe lying to FDLE is some sort of crime. Not immediately reporting a death-in-custody to the medical examiner certainly is a crime, under Florida Statute 406.12.

By misleading the medical professionals, KWPD had doctors at the hospital believing that Charles Eimers died of natural causes.  The hospital dropped the ball, filed a death certificate confirming ‘death by natural causes’, tossed all the lab specimens, and failed to inform the medical examiner.  The body was very nearly cremated before an autopsy could be performed.

But of course, the KWPD quickly found the responsible party:  A newly assigned detective named Todd Stevens.  KWPD trumpeted a Letter of Reprimand placing all the blame on Stevens who was removed from the case.  The Letter of Reprimand, signed on December 13th by the Chief of Police, indicated that Stevens had failed to remain in contact with the family and the hospital and therefore “didn’t know” that Mr. Eimers had been removed from life support a week earlier on December 4th.  The letter also completely exonerates Captain Smith.

But there is a problem with the Letter of Reprimand.  The main element: failure to report Eimers’ death to the medical examiner is a direct violation of a criminal statute.  So, why was there no investigation associated with this incredibly serious mistake? [In comparison, a small issue – like officer Kathyann Wanciak speaking out at a public meeting about a few flower beds over at Glynn Archer School – is still being investigated several months after it occurred and has generated countless interviews.]

But when it comes to Todd Stevens, there is nothing; no interviews, no report, no investigation. KWPD spokesperson Alyson Crean informed us, in a February 3rd email, after we sought copies of the entire investigative file on the matter,

“It was a summary discipline. There was no investigation. You have all of the documentation regarding the discipline.” 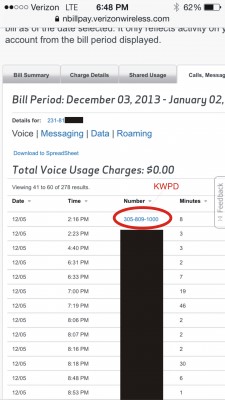 The interesting point here is the reprimand is based on a lie.  First, contrary to the letter, the police detective had indeed been informed of Charles Eimers’ death.  The day after Charles Eimers died, his son Treavor Eimers spoke with KWPD for 8 minutes [as is clearly shown by his phone record.]  Treavor says he explained, during that call to Stevens, that the family had removed Charles Eimers from life support the previous day.

But there is another problem:  If Chief Lee had really removed Stevens from the case on the 13th, then why, on the 17th,, was Stevens still filing evidence in the Eimers case?  Chain of custody documents show that on the 17th of December Stevens logged into evidence, the video that had been published by the Blue Paper on December 13th,.

One more thing that doesn’t add up:  When the Chief summoned us here at The Blue Paper to his office on December 27th, we spent two hours defending our reporting on the case.  We told Chief Lee that we had spoken with Bob Dean of Dean Lopez Funeral Home and that Mr. Dean himself had told us that it had been a miracle that the body had not been cremated and we went on to discuss the matter for quite some time.

Now, why did the Chief of Police, who was so willing to make the Letter of Reprimand public a few weeks later, not mention either Todd Stevens or the reprimand letter that he later claimed he had signed two weeks prior to our meeting?

But it gets worse.

On December 10th at 11:23 a.m. KWPD told The Blue Paper that Eimers was still alive at the hospital, but after what must have been a bit of turmoil over at the Police Station they admitted that, in fact, he was dead.  That was at 1:19 p.m.  You would think that, at that point, there would have been an immediate push for the body to be sent to the medical examiner.  Well no, according to the medical examiner, E. Hunt Schuerman, his office was not informed of the death of Charles Eimers until 12:08pm on December 11th.  Dean Lopez was then notified by the medical examiner and the body was picked up the same day.  If this timeline is correct it means that the KWPD waited nearly 24 hours before finally moving to save the body from cremation.

So, could the Reprimand Letter have been some sort of back-dated self-serving fabrication to exonerate Captain Smith [Stevens’ supervisor] of his involvement in the autopsy fiasco? If Stevens learned of Eimers’ being taken off life support on December 5th, who else knew?

And what about FDLE?  Weren’t they called in that first day precisely to watch over this case and investigate?  How come no one at FDLE could find the time to call the hospital to check on Eimers or to inform the medical examiner for nearly 24 hours after it became clear that the body had been sent off for cremation?

And, what is Kathy Smith really supposed to do with all of this over in her FDLE office in Marathon?  One thing she’s not doing is interviewing witnesses.  Not interviewed: The restaurant worker who claims he and other employees heard officer Kathyann Wanciak yell, “Someone better get him away from me before I arrest the son of a bitch myself!” and ““He just murdered that man.”  Not interviewed:  the witness who claims Officer Lee Lovette made some incriminating admissions the day after the incident, and just this week we discovered another witness who was working the restaurant at South Beach that day, who said she heard a Taser being used repeatedly –  also not interviewed.

The death of Charles Eimers is turning into a wrecking ball; a loose cannon.  When were these law enforcement agencies intending to tell everyone about the conflict of interest between FDLE’s Kathy Smith and KWPD’s Captain Scott Smith?

Isn’t it time to start facing the music, before the rumbling noise of steel rolling under the deck sinks the ship?

10 Responses to “The Eimers Investigation: Shocking Link Between FDLE and KWPD”