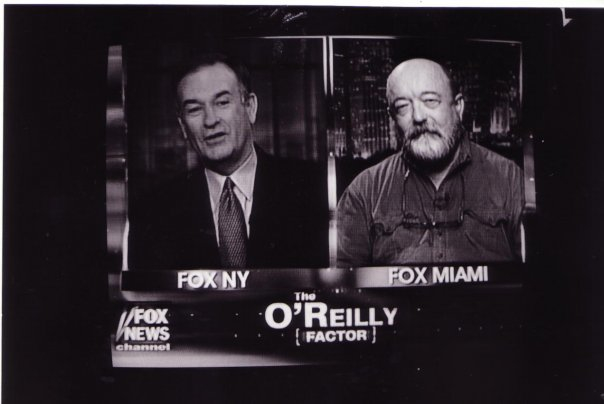 Since I have been writing a weekly column for the new Blue Paper online, the editors have periodically accompanied my column with a photo of me appearing with Bill O’Reilly on his show on the Fox News Channel. A number of readers have asked me when and why I was invited to appear on the O’Reilly Factor– the highest rated cable news program. Longtime readers know the story, but new readers may not. So here it is again. Longtime readers please pardon– but we have a lot of new readers.

When I ran Key West The Newspaper, I often pushed the envelope when it came to controversy– as the new editors still do. Back in 2001, one of our prime targets was an out-of-control police department. Needless to say, this pissed off then-Police Chief Buz Dillon. And on June 22 of that year, he used an obscure state law to have me arrested and jailed for writing about an on-going internal investigation. Now while I was confident that those charges would never stand up, the immediate fact was that I was facing criminal charges and that I was going to have to find the money to hire a lawyer and defend myself in court. Beyond that, I was concerned about my reputation and the reputation of my newspaper. Rightly or wrongly, many people assume that anybody arrested and charged is probably guilty.

And that was apparently just fine with Chief Dillon. To try to embarrass me as much as possible, he had his public information officer send out a press release announcing the charges against me to the world. It was one of the top stories in the Key West Citizen and on Bill Becker’s radio show. I was indeed embarrassed; but at that time, I could have never imagined the degree to which sending out that press release would blow up in Dillon’s face. A copy of the press release was also sent to the Miami Herald, where it got prime coverage in the Keys section. But Miami Herald editors pointed out that the law Dillon had used to have me arrested had been declared unconstitutional years earlier but, for some reason, was still on the books. Oops! At that point, then-State Attorney Mark Kohl immediately dropped the charges.

But by that time, ACLU officials in Miami had seen the story and contacted me and offered to sue the City of Key West on my behalf. I asked for some time to think about it. Frankly, I would have been happy with an apology and some disciplinary action taken against Chief Dillon. When the City Commission refused to take that action, I told the ACLU to do their thing.

In the meantime, the Miami Herald’s news story had also hit the national wire services. For some reason, journalist-arrested stories are often pretty big stories. And Bill O’Reilly’s producer saw the story and called and asked if I would appear on the show. That happened just a couple of weeks after the arrest. Dillon was also invited to appear on the show but, as O’Reilly pointed out on-air, “He must be hiding under his desk.” At this point, Dillon himself was actually in a bit of trouble because he had not cleared such a high-profile arrest with the City Manager (his boss), or the Mayor or the City Attorney– probably because he knew that they would be incredulous that he wanted to do something so stupid. He was told that, if he had wanted to pursue the allegations against me, he should have simply issued a notice to appear in court. But throughout his tenure here, Buz Dillon consistently demonstrated that he was not the sharpest pencil in the box. It was inevitable that he would eventually be fired. And he eventually was.

The ACLU lawsuit was filed in federal court in December 2001. The lead ACLU attorney told the press: “Nowhere in America should a journalist be arrested for reporting the truth.”

As with many lawsuits, my case seemed to take forever to slog through the courts. The original federal judge assigned to the case died; and then a semi-senile judge threw it out of court. But the ACLU lawyers were not deterred. They took the case to the 11th Circuit U.S. Court of Appeals and, in March 2005, a three-judge panel ruled 3-0 that the state law was indeed unconstitutional and that the City was liable for damages. We settled for a quarter of a million dollars. The ACLU got most of that, but they earned it. I could have never afforded to take the case to appeal on my own. But I was happy with a new sports car and a new computer system for my newspaper.

We had not only made new law in Florida, but we had also kicked the collective asses of the City Commission, the semi-senile federal judge– as well as Buz Dillon. By that time, however, Dillon was no longer a City employee and had left town in disgrace. Another City official who got his ass kicked was Robert Tischenkel, who was City Attorney when the ACLU filed suit. He had advised the City Commissioners not to settle because, he said, the lawsuit was “frivolous” and would cost only a few thousand dollars to successfully defend. As it turned out, however, it cost the City– including attorneys’ fees– hundreds of thousands of dollars to lose the case. In hindsight, maybe, just maybe, an apology and disciplining Chief Dillon might have been the right decision. Keep in mind that I was never interested in a lawsuit or a money settlement. All I wanted was vindication. Taxpayers can blame Bob Tischenkel for the cost of this case.

My arrest had also been the starting point for a movement to create a police oversight board here– the Citizen Review Board, approved by the voters in 2002.

NOTE: About the ACLU. I still get calls and emails from people who are in trouble with the law asking how they can contact the ACLU. I have to tell them that the ACLU is very selective about the cases they take on– usually only cases that involve issues that fit into the ACLU’s agenda. I didn’t call the ACLU; they called me– because they had been trying for years to get the gag law used to have me arrested declared unconstitutional once and for all. I was simply the poster boy for an issue the ACLU wanted to pursue. And the only reason the ACLU knew about my case was the press release sent out by Chief Dillon!

Dennis Reeves Cooper founded Key West The Newspaper in 1994 and was editor and publisher for 18 years, until he retired in 2012.

2 Responses to “THE BLUE PAPER AND BILL O'REILLY”