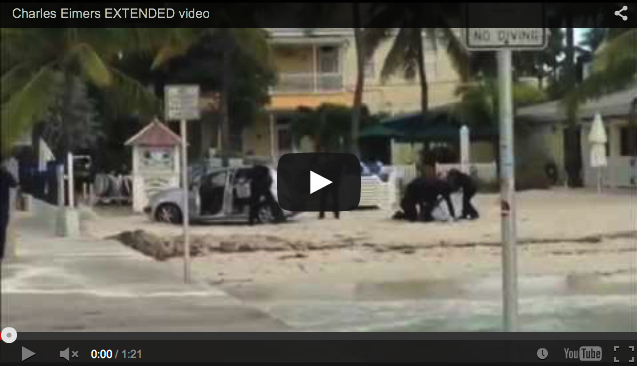 Within a few minutes the man in the video above [Charles John Eimers] would be dead.  According to official reports, no Tasers were fired, Eimers (61) worked himself into a heart attack while fighting police officers.  However, according to eyewitnesses, Eimers was tased until dead.  Reportedly in the words of one eyewitness, a police officer from New York, it was “legalized murder on the beach.”

The video stops before showing Eimers going ‘limp’ and it doesn’t conclusively show whether Tasers were used or not.

The story began a few miles away from that fatal beach, on Thanksgiving Day, at around 8:20 a.m.  Eimers, who was driving his PT Cruiser westbound on North Roosevelt Boulevard, allegedly used the left turn lane to pass officer Gary Celcer’s police car.  Celcer activated his siren and Eimers immediately stopped across from Pizza Hut near the intersection of Roosevelt and Kennedy Drive.  Eimers handed his driver’s license to Celcer who “noted the interior of the car to be very disheveled and possibly that Eimers has been living out of the vehicle.”

Then, for reasons unknown, while Celcer was running Eimers’ license, Eimers backed out of the spot, got back onto the road and began driving toward downtown.  Celcer followed in pursuit but the PT Cruiser was passing cars using the center lane and Celcer prudently decided to “discontinue actively trying to stop Eimers.”  He  “turned off [his] siren and emergency lights” and he called for back-up.

At that point it seems as though every police car on duty joined in the pursuit of Eimers’ PT Cruiser.  Patrol cars were reportedly driving carefully (stopping at traffic lights), but at least one car spotted by a witness was reportedly going an estimated 50 mph on Duval Street.

Eimers was spotted by Officer Kathyann Wanciak at the intersection of Amelia and Duval “smoking a cigarette with his left hand and driving with his right hand.”

At the end of Duval Street Eimers’ PT Cruiser turned into South Beach, made a slow u-turn onto the sand and stopped on the beach.  It was around 8:30 am.

In spite of officer Lovette’s claim that Eimers immediately began fighting with officers, the video [above] obtained by The Blue Paper shows Eimers calmly walking out of his car.  Three police officers move into the frame with guns drawn.  Wanciak orders Eimers to get on the ground, which he does.  The film shows Eimers being hand-cuffed, but suddenly he starts kicking his legs.  What happened?  Did he change his mind again about following police directives?

Well, maybe not.  One account might provide an explanation:  While officers were cuffing Eimers’ left hand [and we’re not making this up] officer Garrido somehow got his finger stuck in the handcuff.  Garrido was screaming in pain for other officers to come to his rescue.  Perhaps that was the same moment that Eimers, finding himself in the same painful predicament, began kicking his feet in protest.

What happened after that remains a mystery.  What is certain is that, within less than 5 minutes, Eimers stopped breathing and turned “blue in the face.”  He was later pronounced dead.

Police Tasers have gained an infamous reputation for causing cardiac arrest – specifically when used against elderly persons.  Eimers was 61.  The police department assured us that no Tasers were used.  However, the report written by officer Wanciak mentions Officer Lovette’s Taser, which was “placed on the back of the subject.”  She doesn’t say whether the Taser was fired and unfortunately Wanciak was no longer present when Eimers lost consciousness; she had just gone back to her patrol car – parked on Duval Street.

There are also the many other ‘incident reports’ written by the numerous male police officers who took part, however they are extraordinarily brief and they all begin with this statement:  “On December 2, 2013, I was ordered to write the following report regarding an incident that took place on November 28, 2013 (Thanksgiving Day) in the City of Key West.  It is my understanding that by refusing to obey the order to write this report that I can be disciplined for insubordination and that the punishment for insubordination and [sic] be up to and including termination of employment.  This report is made only pursuant to such orders and that potential punishment/discipline that can result for failure to obey that order.”

In his report, Officer Lovette never mentions having drawn his Taser as Wanciak contends.

“They tased him in the neck,” says one server who asked not to be identified, and after that he didn’t move – he was out.  Then they rolled him over and started compression.”

“I was about 30 feet away,” says another, “I saw him [a police officer] taser him [Eimers].  He didn’t lift the taser from his chest.  I could see his legs jerking when they were tasing him…  it lasted a good 6 minutes… The female cop was not involved in all that.”

The city, however, purchased state of the art Tasers three years ago, equipped with an audio/video recording system that is triggered whenever the Taser is deployed.

The Florida Department of Law Enforcement (FDLE) is currently investigating the death of Charles Eimers and is actively searching for a tourist who claimed to be a New York police officer and who could be a very important witness.  This particular witness was quoted as saying that the whole thing was an obvious use of excessive force and that the suspect was already under control,  “I have never seen this done to an elderly man…”  He reportedly argued with the Key West police officers and was threatened with arrest.

So, who to believe?

Could the witnesses have confused the defibrillator (Automated External Defibrillator – AED) that police used to try to resuscitate Eimers with a Taser gun?  Not so says one witness, “The defibrillator was provided by the restaurant [Southernmost Beach Café] and the police officer was using the Taser before we gave them the AED.”

There is even uncertainty as to whether the AED was in fact used to administer shock treatment at all.  Officer Gary Celcer notes in his account that the AED analyzed Eimers and reported, “no shock was advised.” Standard AED devices block the delivery of shock when the device recommends against it.  A manual override is an option, but is recommended for use by trained emergency medical personnel only.

Key West Police may have had the misfortune of dealing with a man in bad health who, due to his own failure to follow directions, gave himself a heart attack or here was a man presumed to “be living out of his car” who was giving the police a hard time – Could someone in the force have tried to teach him a lesson with a few blasts of a Taser gun?

As of press time we are following more leads including eyewitness accounts, photographs, and at least one more video:  In the video we published above, a man is observed recording the scene with his phone.  There is also a witness on a bicycle. If anyone knows the identity of the persons shown in the video or has any other information about this incident or Charles Eimers who was from Michigan please contact us at editor@thebluepaper.com.