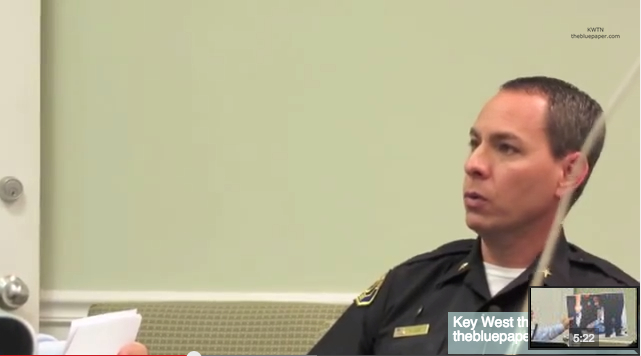 A wrecking ball crashed through the City’s defense to the Eimers police brutality case on Friday.  At a scheduled deposition Chief Lee was expected to provide bureaucratic information about the City’s procedures and policies in the wrongful death case filed by the Eimers family against the City of Key West and 13 police officers.

But instead he spent over two hours freefalling into a seemingly endless pit opened by allegations of  “perjury” committed by his officers.  At issue was the surprise new bystander video that showed up this week from Colombia.   Unlike the first video, it shows Eimers arrest all the way to the point of his death.  A fact that turns out to be devastating to the somewhat creative and more favorable stories cooked up by some of the officers.

“Sir, we’ve gone to the trouble, in preparation for various motion practice,” said attorney Robert McKee, “of taking every question and answer of your officers who were under oath and every time their answers were not what the video showed. There are pages and pages of it”…. and down we went.

The new video completely contradicts one point nearly all of the officers have insisted upon:  They said Eimers only went limp after they tried to lift him and walk him to the police cruiser.  The video however doesn’t show officers attempting to lift Mr. Eimers up.  He was on his belly, hands shackled behind his back, legs hobbled.  When officers realized he had stopped breathing, they untied him, rolled him onto his back and within two minutes began CPR. He left on a stretcher.   Yet strangely this “rising to his feet,” is one story most officers swore to in their depositions, sometimes  with minute detail,

Medina: “He was resisting the entire time until we lifted him up…. When we brought him up is when he went unconscious.”

Medina: :I put my arms under his belly.”

Q:  Was he in the prone position when he was being lifted?”

Lovette: “He was still breathing and fighting when we raised him.”

DelValle: “When we lifted him up he was struggling to get to his feet.  He leaned forward.  I saw his legs moving to try to stand up.”

Galbo: “At that point he was sitting up.  He was leaned up.”

Galbo: “Yes.”…  “We decided to stand Mr. Eimers up and walk him over to the patrol car.”

The reader can verify that the new video doesn’t show any of that happening.  Eimers was found to be unconscious while lying prone in the sand, rolled over onto his back, then treated with CPR.

So why this insistence on representing that Eimers was nearly able to stand up even though he was already virtually dead? Arguably these creative stories have been essential to the defense. They enabled the Medical Examiner to rule out asphyxiation: How could Charles Eimers have died smothered in the sand if he was still alive when he was lifted up off the sand where there was plenty of air to breathe?

“Blood is not good,” attorney Darren Horan told us, “blood in the arrest of an unarmed subdued old man spells excessive force.”  According to FDLE’s Kathy Smith and sworn testimony by some of the officers, Eimers had no blood on his face and “only a light dusting of sand.”

“I didn’t see at any time Mr. Eimers face planted in the sand,” swore Officer Delvalle during his deposition two week ago.  But on Friday both Chief Donie Lee and Sergeant Joseph Tripp, of Internal Affairs, were put face to face with the gruesome photos of Charles Eimers’ showing his head bloodied and all caked up with sand.

Q:  Was there sand on his face?

A:  “There was residual sand around his nose.”

Chief Lee had to agree with the Eimers family attorneys, “It appears that he had sand on his face.”

Q:  Why does his face appear different here than on the photo taken by officer Stevens?

Q:  Did Officer Stevens clean up his face before taking the photo?

Q:  Aren’t your officers making false statements under oath? Aren’t they guilty of perjury?   Are you the one in charge?

Sometimes it’s not that great to be the Chief.

But there was more.

There’s the problem of the man who was in two places at the same time. Motorcycle cop Officer Randall Hartle was not there or rather according to the CAD report he did not arrive on scene until long after it was all over.

Now, according to KWPD, these CAD reports represent an incorruptible system of data collection. Yet in this new video Officer Hartle appears mysteriously on scene at a time when the CAD readout clearly shows that he would not arrive until over 20 minutes later. Does someone have a time machine at KWPD or was the data tampered with?

A similar controversy involves Officer Gary Lee Lovette’s Taser.  Three civilian witnesses testified they saw or heard a Taser being fired.  Officer Wanciak testified she saw Officer Lovette placing the Taser on Eimer’s upper back.  The video shows Lovette’s arm arguably in position to Tase Eimers, yet the data report collected for that particular Taser shows that it was fired 2 hours after the incident with Eimers – at 10:35 am – for 5 sec.

On the video Wanciak is seen making a call to dispatch. She is assigned code #P48.  Dispatch CAD data indicates that a transmission from Officer P48 came in informing that Eimers “was Tased”, but officer Wanciak testified on Friday that she didn’t make such a report.  Then, 2 hours later another CAD entry states “not Tased” even though no investigation has yet been conducted regarding the officers’ Taser devices.

Needless to say Eimers family lawyers had a field day with their cover-up allegations.

The new video also supported the testimony of a tourist from Maryland, who reported having heard Charles Eimers yell “Ow! You’re hurting me!”  This complaint is heard loud and clear in the new video.  The Chief admitted that the voice was not that of any of his officers and that it had to be Eimers.  FDLE’s Kathy Smith claimed in her investigative report that the “Ow!” heard on Officer Medina’s external dashcam mic had come from Officer Gabriel Garrido who had gotten his finger stuck in the handcuff.

There is now some solid proof that the officers escalated and incited resistance by hurting the old man and carelessly allowed him to suffocate in the sand.

By 6:00 pm, when the depositions ended, the accumulation of lies that had been exposed that day had worked a nauseous daze over those of us in attendance.  The crowded conference room emptied out with attendees barely looking at each other.  More depositions are scheduled for next week.