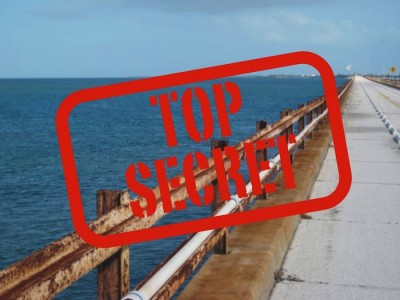 There’s an old joke that goes, “If you believe that then I have a bridge to sell you.” In other words, you’re gullible. While the bridge in the oft repeated saying originally refers to the Brooklyn Bridge, Monroe County might be wondering if the joke’s on them when it comes to acquiring the Old Seven Mile Bridge at the west end of Marathon.

So is Monroe County buying? Maybe not.

Favored by locals and tourists alike who love to walk or bike the 2.2 miles to Pigeon Key, the bridge has been closed to automobiles since December 2007. And yet, even though it’s no longer a bridge used by traffic, the Florida Department of Transportation, surprisingly, has blocked attempts to release engineering studies of the bridge to the general public.

Why? Because a Florida state law passed right after 9/11 mandated that plans and reports for all state bridges be classified. This came as a result of a request from Homeland Security.

The county commission, which has been considering taking over the bridge, was blindsided by the turn of events.

“I was surprised that it applied to the unused remnants of the Seven Mile Bridge because it’s not being used for transportation purposes,” said county commissioner Danny Kolhage.

Kolhage and Commissioner Heather Carruthers put the brakes on any further consideration of a transfer of ownership until the county can get a report that they can show to a qualified structural engineer and not just county staff. Right now DOT only wants to provide what’s known as a redacted version, one with portions covered by the state law blacked out. Kolhage doesn’t think that’s enough.

“I don’t really think that’s going to be successful because what should be made public is what DOT rates the bridge that has to do with its conditions. There are photos of what’s beneath the water line. If Monroe County is contemplating a multi-million dollar expenditure of tax funds on this bridge then the public has the right to have all the information. I don’t think a redacted version will be helpful.”

Bernard Spinrad, who is board president of Friends of Old Seven, a volunteer grass roots organization that has been working hard to save the bridge for continued use as a recreational facility, was also surprised by the turn of events.

“It’s a bit of a blow. It’s a situation we’ve been trying to break for a while and we’ve not been successful. We have a really good relationship with DOT but they are bound by state law and Homeland Security rules that can’t really be flexible,” he said.

So is the bridge really threatened by terrorists? Gus Pego, District Six Secretary for Miami and the Keys, thinks it is.

“Pedestrians are on there and anyone could do terrible things. I am not going to make light of Boston, believe me. I would say you just don’t know what people are going to do. I have no problem with the law,” he commented.

Kolhage is not sure. “I just don’t understand why the law still applies for this structure. It doesn’t make sense to me.”

There’s no doubt that terrorist attacks, though nowhere near as frequent as in places such as Tel Aviv, Beirut, Islamabad, or Damascus, have ratcheted up the fear factor in the U.S. The bombing at the Boston marathon increased that fear with calls for many more security cameras, much greater inspection everywhere, and a greater push for a general tightening of regulations. A friend who is participating in a bicycle ride through the boroughs of New York City has been told that she can’t bring a backpack or use panniers on a forty mile bike ride.

The other issue, as always, is money. According to State Representative Holly Raschein’s office, “The estimated cost for the rehabilitation of the Old Seven Mile Bridge including steel paint system replacement is approximately $18 Million but the estimate will take into consideration what type of design vehicle will service Pigeon Key, which will be determined in consultation with the Pigeon Key Foundation, the City of Marathon and Monroe County during the design process. The future long term routine maintenance based on average statewide cost excluding the required biannual routine inspection is estimated to be around $70,000 per year. This cost includes minor concrete repairs, sealing cracks, welding, sign replacement, spot steel painting, trash pickup, etc. Additionally, due to the aggressive corrosion environment that the bridge is subject to, it is estimated that the bridge painting system will need to be replaced every 7 to 10 years at an estimated average cost of $3.5 Million.”

That’s a lot of money with no public disclosure.

Sprinrad, even though his organization is enthusiastic about saving the bridge and has done a terrific job of spreading the word via its website (https://friendsofoldseven.org/) and a newsletter, is somewhat pessimistic about where this will go.

“I think they need a structural engineer specializing in bridge stability. Danny Kolhage has said that he believes that the underwater structures might be like sponges. Now that’s a very serious possibility because everybody assumes that the work has to be on the surface, particularly on the deck. But if there’s a lot of work to be done under the water the whole thing not be really doable. We’re talking about a lot of money.”

He wants the bridge decommissioned and handed over to the County for use as a recreational facility. Pego says that might not change anything. The county is a government agency and would be subject to the same rules as DOT. He did add, however, that the county is free – right now – to show the reports to an independent structural engineer as long as that person signs an affidavit vowing to never release the information to the public. Such a study could go a long way to resolving the issue. Or not.

However, whatever develops, the public, the taxpayers, will not be allowed to view any of the relevant information. Ever.