After months of grand jury investigations and the conviction of the offender, one would have hoped the scandal surrounding the County’s stolen Iphones had finally cleared from our skies.  Unfortunately, it hasn’t.

“This is about fairness,” says Robert Cintron, a local criminal defense attorney.  He is sitting at his desk behind a towering pile of records accumulated in the defense of his client, Lisa Druckemiller.  The fact that Druckemiller has been made to carry the entire blame for dozens of stolen Iphones has left him with a feeling of ‘unfinished business’.  Cintron now shares, with The Blue Paper, the surprising results of his own investigation.

This story began about a year and a half ago with an innocent question at  the County’s Fire Rescue Department.  Someone asked why it was that the department was billed a service charge for an Ipad that wasn’t in their inventory.  The mysterious Ipad inquiry snowballed into a full-blown investigation before the grand jury and the subsequent sentencing of the former head of the Technical Services Department, Lisa Druckemiller, to 18 months in state prison.  Druckemiller had admittedly sold County Iphones and Ipads for as little as $100 cash.

Before it was over several prominent County officials had been implicated in the scandal.  As it turns out one of the most frequent purchasers of those stolen Iphones was none other than Druckemiller’s boss, Roman Gastesi, the County Administrator.

Buying stolen property is a felony.  The grand jury report on the matter slammed Gastesi and recommended his dismissal.  But after much deliberation they decided not to bring an indictment – giving Gastesi’s “naivety” defense the benefit of the doubt.

“The grand jury did not have the benefit of what we know today,” says Cintron.  The center of the problem was simple:  Did Gastesi buy the Iphones believing there was some type of miraculous County program that offered $100 iphones for its employees or did he, as Druckemiller claims, pressure her and in fact initiate the fraudulent scheme?  According to Druckemiller Gastesi came into her office, placed two $100 bills on her desk and said, “I want two Iphones for my kids.  Make it happen.”

What the grand jury lacked, says Cintron, were the phone records that would make it possible to retrace the history of the fraudulent scheme.  The grand jury report explains:

“But now,” says Cintron picking up a pile of printouts nearly a foot-high, “we have AT&T records going all the way back to 2008 and this is how we discovered that the first phone that went off-the-books so to speak went onto Roman Gastesis’ personal IPhone account.”

Now, who knows what the members of the grand jury would have done had they been able to verify that the scheme, contrary to what Gastesi has been claiming, started with him, the County Administrator.   “The phone that was purchased by the County, paid for by the County, and then delivered to Mr Gastesi so that his son could use it – that was the first instance,” insists Cintron. 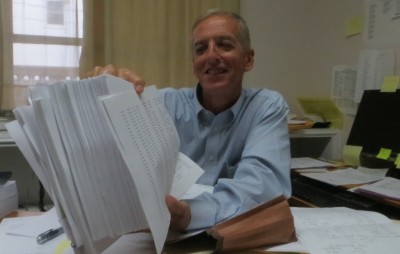 You may wonder why this information was not available to the grand jury.  Apparently, it took some earnest legal pounding to force AT&T to give up the records.  And then Gastesi’s name didn’t appear anywhere because for some reason his last name had been misspelled.  This was some sort of modern investigation, involving science fiction themes,  secret codes encrypted into every phone,  and other mystifying cyber-marvels.  “It was like learning Chinese,” says Cintron.  But it also had a lot to do with good old-fashioned interrogation of witnesses:  “Nobody tells the truth like an upset ex-wife,” says Cintron with a smile,  “I would leave it at that.”

Does this blow Gastesi’s “naivety” defense out of the water?  State Attorney Catherine Vogel asked for and received a copy of the AT&T records obtained by Cintron.  Stay tuned.