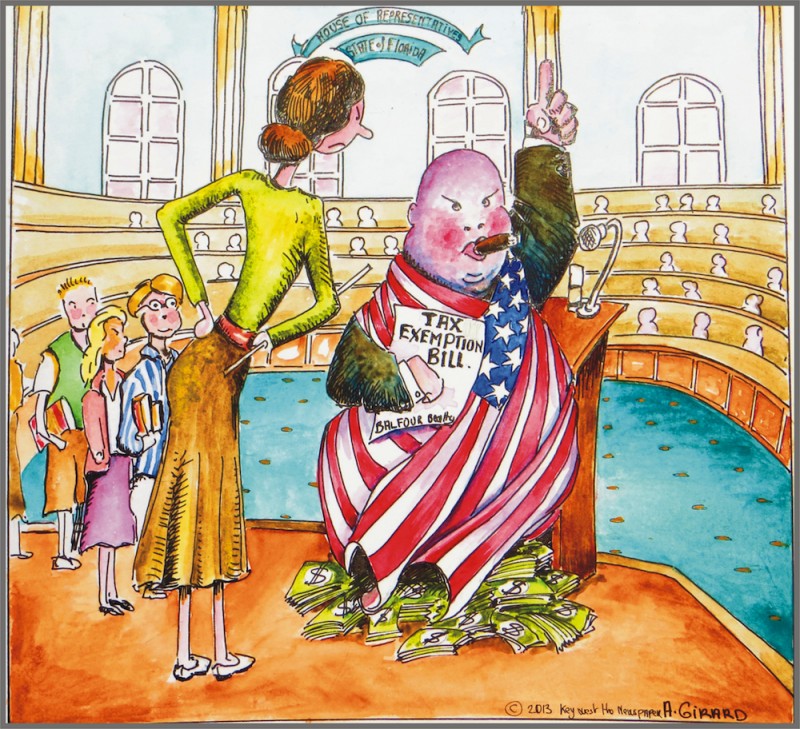 When, in July of 2012, the news broke out that Balfour Beatty’s Southeast Housing LLC owed Monroe County Property Appraiser about $ 11.5 Million due to not having paid taxes since 2008 and that liens had been placed on their properties, the corporate giant waged an all-out war aimed at escaping payment.  It filed suit against the Property Appraiser and put into gear an intense lobbying campaign in Tallahassee, trying to get Florida legislators to tailor to its special interests and create a full and retroactive tax exemption.  After appearing practically unstoppable, their efforts ended up on Thursday just shy of complete failure.

The history of this battle is worth recounting.  Balfour Beatty’s campaign has been a remarkable exercise in misdirection.

At first Balfour’s lobbyists managed to convince everyone that the tax exemption Bill was merely a housekeeping maneuver.  The goal was to make it absolutely clear that Florida was following federal law and exempting privatized military housing contractors from local ad valorem taxes.  Way down south, they said,  in Key West, an unpatriotic property appraiser was stirring up trouble by refusing to admit that military housing developers were tax exempt as a matter of federal law.   Companion Bills, sponsored by Senator John Thrasher and House Representative Jimmy Patronis, were moving through the legislative process with amazing ease.  Seemingly unstoppable, the Bills were adopted unanimously by one review committee after another.  Back in Key West even our own Representative Holly Raschein was in favor of the tax loophole.

But the Key West rancor began to spread to other Counties.  Some were complaining that developers were planning on building giant tax-exempt hotels on military land in their districts,  other Property Appraisers had also listened to Balfour and other military housing company lawyers and either had not collected taxes for years (like Monroe County) or had entered into dubious contracts for minimal payments in lieu of taxes and the $11.5 Million in tax liens was beginning to stir up some interest.  Other property owners who also provide housing to the community began to complain of Balfour’s unfair tax advantage.   US Congressman Joe Garcia joined voicing strong opposition to the tax loophole.   The pressure began to rise.  Patronis even called Balfour’s attorney to the podium during one Committee meeting to help convince Florida Representatives that only a small percentage of units were rented to civilians and that these projects were never meant to be taxed.

As it turns out, even the most conservative minds don’t have much trust in the words of military contractors; calling Balfour’s lawyers to the rescue might have signaled the beginning of the end.

Many communities with large military bases began to crunch the numbers.  We certainly did in Monroe County.  The tax loophole began to emerge from the fuzzy patriotic cloud lobbyists had managed to wrap around it.   It had the gritty teeth of a multi million dollar international corporation.  More importantly, it now had a victim, and not just any victim: the school children (many of them from military families) and the teachers in those very communities hosting military installations.   As we all discovered, 80% of school funding comes from property taxes.  While a disproportionately large amount of children live in housing built on military bases, the private developers of those housing projects were refusing to pay local taxes.

Turned out the federal government should have sent $1.8 Million in Impact Aid to Monroe County for school children living on federal land in 2012 but sent only $240,000.   Nobody had more to lose by this tax exemption legislation than teachers and school children.

Representative Holly Raschein was first to see the light and made a 180 degree shift on her support for Patronis’ Bill.  Then Senator Thrasher amended his Bill to exempt only property rented to  active-duty military or their families.  Representative Patronis was harder to convince, but finally he had no choice but to go for ‘better than nothing’ and concur with Thrasher’s limited tax exemption Bill which was unanimously adopted by the House on May 2, 2013 and now awaits the signature of Governor Rick Scott.

Just what percentage of rental units is Balfour/Southeast going to have to pay taxes on is still a mystery.  Balfour’s lawyer has claimed in Judge Audlin’s courtroom that only 1% of Balfour’s Key West rental units are occupied by non-Navy.  However, John Dent, the Property Appraiser’s attorney, who has seen the pertinent documents stated that only 26% of the units were rented to persons  on active-duty in the Navy.  A document obtained by KWTN shows that the percentage of units occupied by civilians in 2009 was almost 40% but that was prior to the extensive increase in civilian rentals at Peary Court.   So far, Balfour Beatty has refused to make public any documents that would provide accurate figures.

This may not be the end of the controversy, however.   John Dent,  the Monroe County Property Appraiser’s lawyer, has pointed out that the Florida Constitution prohibits discrimination between taxpayers in matters of property taxes.  Some exceptions have been made allowing special treatment, for example for those claiming Homestead and for Senior Citizens, but such exemptions have required a Constitutional provision.  Landlords who, like Balfour, are renting to military personnel but who will not benefit from the same tax exemption might sue for discrimination under the Florida Constitution.