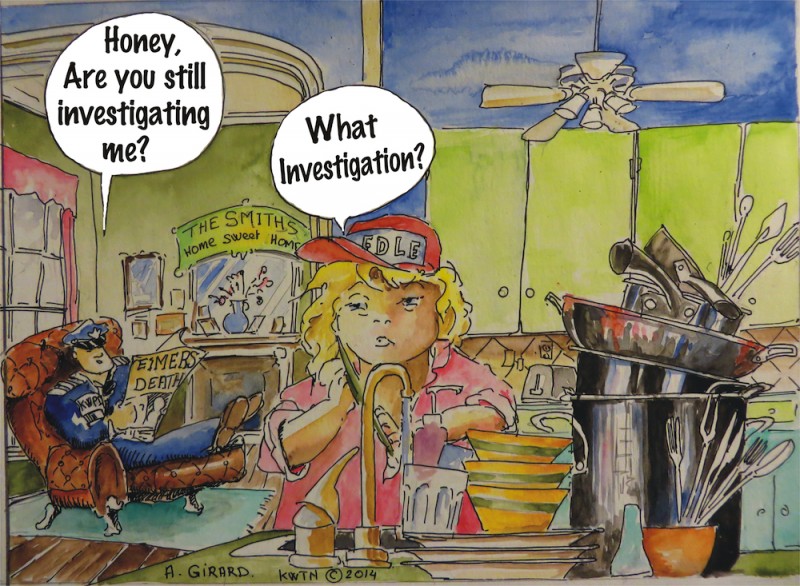 Kathy Smith, lead FDLE agent in the Eimers death-in-custody investigation and KWPD’s Chief of Operations at the time of the arrest, appear to be partners in a perjurious plot to obtain a strangely advantageous home loan.

This casts more doubt on FDLE’s “independent” investigation of the death of Charles Eimers. It is especially troubling considering that so much direct evidence including dashcam recordings, Taser video footage, and witness information was allowed to “slip away” and that Eimers’ body was nearly cremated before autopsy; all under Special Agent Kathy Smith’s watch.

This has been an ever-worsening saga.

Soon after we published the video showing the arrest of 61-year old Eimers, we began to receive tips from readers who claimed that they too had witnessed Key West police officers “kill” people.

We asked FDLE to provide us with a list and copies of all death-in-custody and serious injury cases involving the KWPD for the past ten years.   But the list we received included only three cases, all were Monroe County jail inmates when they died and none involved KWPD officers.

We were nonetheless able to verify tips for two victims:  one Alexander Pla and a Matthew Shaun Murphy.

Both strangely resembled the Eimers case.  On February 8, 2005 Alexander Pla was taken out of his house for “acting crazy”.  KWPD threw him, hogtied, in the back of a police transport van with two officers.  By the time the door reopened at the police station Pla was dead. Matthew Shawn Murphy was tased on Duval Street three and one-half years ago.  He is still listed as a patient in a “vegetative state” at Jackson Memorial Hospital in Miami.  Both case files show that KWPD notified FDLE. Neither of them appeared on the list provided to us by FDLE.

Were Kathy Smith and her fellow agents at FDLE deliberately hiding Eimers-like cases from reporters? Did Kathy Smith deliberately allow Eimers’ body to be nearly cremated prior to autopsy, allow direct evidence including recordings and crucial witnesses to “disappear”?  And just how “independent” from KWPD is Agent Kathy Smith?

We previously reported that Agent Smith was in fact the ex-wife of Captain Scott Smith, who was the Commander of Operations and immediate supervisor of the officers involved in Eimers’ death. But this week we discovered that the two are also partners in a financial scheme that appears to involve outright perjury.

At any rate, they were asked to sign an affidavit swearing that they were still married.  This isn’t just any kind of affidavit. It begins with two lines of bold capital letters warning about the “severe criminal penalties” for making of a false statement and again, just above the signature lines it warns a second time of the “penalties of law” associated with “falsely swearing to statements.”

And sure enough both ‘eagles of law enforcement’ signed their names:  Kathy Smith and Scott Smith, swearing they are still married four months after their divorce. Hell of a thing. 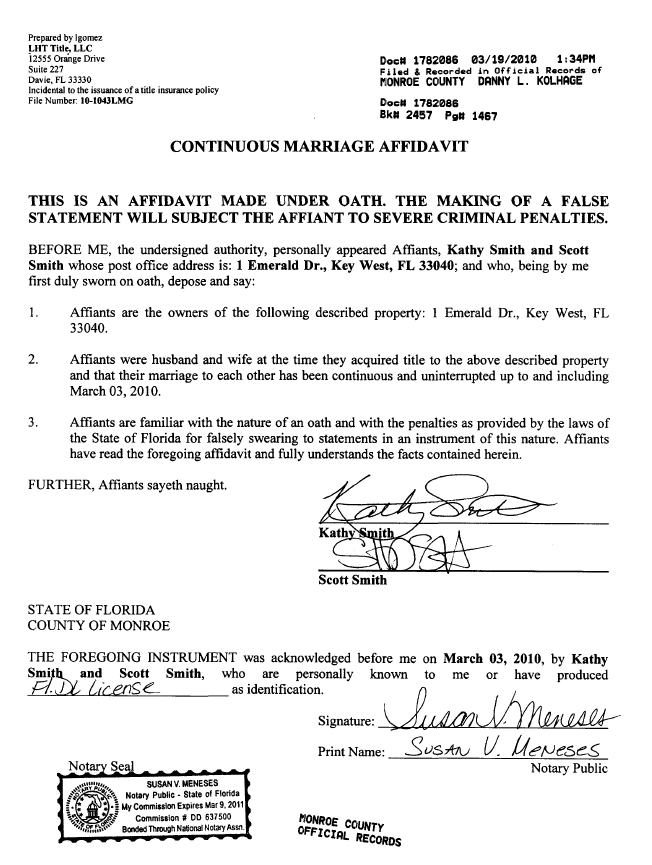 Can we really trust that Kathy Smith, who has a child with Scott Smith and who apparently conspired with him to obtain an advantageous home loan through perjury could investigate her ex-husband’s department and do it with the stern impartiality the law demands?

Another troubling fact surfaced involving Agent Smith’s ex-husband Scott Smith.  On December 4th, the day of Eimers’ death, Captain Smith put in an application to join FDLE.  Didn’t that create yet another layer of entanglement and conflict of interest within the Eimers investigation?

Sometime after 9:00 am on November 27, 2013, KWPD Chief Donie Lee gets the news that a suspect named Charles Eimers was not going to leave the hospital alive and it’s ‘Defcon 3’ at the police department.  Chief Lee is out of town for Thanksgiving, he puts Captain Scott Smith in charge. Smith brings in the Department’s “cleaner” – an officer notorious for his reported willingness to “disappear” incriminating evidence: Sergeant Pablo Rodriguez.

Rodriguez’ “magic” doesn’t always work, though.  Two months ago the City was forced to pay out $ 287,000 to settle a lawsuit brought by a former officer who claims he was harassed and retaliated against by top KWPD brass for refusing to obey Rodriguez’ order to destroy a dashcam video [showing Rodriguez running into a suspect with his police cruiser.]

Rodriguez is called in on the Eimers crisis immediately.  Then FDLE had to be called.  With or without a wink, it was agreed that Captain Smith would call his ex-wife Kathy Smith at FDLE, so she could take charge of the “independent and neutral” FDLE investigation.  FDLE must be called in for any death or serious injury that occurs “in-custody”.

Kathy drives down to Key West and according to KWPD records, the entire crew: Sgt. Rodriguez, the Smiths, and another FDLE agent, Mid Quad, meet that morning.  From that moment on Agent Kathy Smith is in charge of the investigation.  But in many ways, things would proceed as though law enforcement hoped Eimers was a castaway homeless man that no one would ever miss.

At the beach, the witnesses have been dispersed. Eimers is “un-arrested” so technically he is no longer “in-custody”; he’s just a sick old man at the hospital.  Doctors are told that he collapsed suddenly and had no pulse by the time the officers got to him and the family is not contacted. After he passes, his body will be cremated and he will simply disappear into FDLE’s filing system – just like Alexander Pla, Matthew Shawn Murphy, and who knows how many others.

In spite of the clear mandate found in Florida’s criminal statute 406.12, the Medical Examiner is not contacted after Eimers’ death. On December 4th the body is sent for cremation to Dean-Lopez funeral home. The record is clear. Even after The Blue Paper blows the whistle down at headquarters [on December 10th] on the near cremation issue, the Medical Examiner is still not notified until 24 hours after KWPD has admitted that they are aware that Eimers had been dead for 6 days.

“In a fresh case – might find some sand in the upper airway but he was in the hospital for a week so less likely.  Lung changes are non-specific.”

The preliminary autopsy is inconclusive as to the cause of death.  On January 17, 2014, the Medical Examiner indicates he will have to base his conclusion on the circumstances of the arrest after FDLE has made the information available to him.

But, instead of securing all possible evidence, Kathy Smith had left all of the dashcam recordings, audio, and Taser recordings directly in the hands of KWPD officers, including Sergeant Zamora, one of the prime suspects under investigation in Eimers’ death. A month and a half after the incident, on January 13, when she is finally logging in all of that crucial direct evidence, most of it is either erased or “lost”.

Finally, on February 20th, Agent Smith begins to interview the officers.  The Medical Examiner, however, will not review any of the witness interviews himself, instead he specifies on April 8, 2014, that he will shred the CD’s that were provided and rely exclusively on Kathy Smith’s “impression of interviews.”

“Note: Some interviews on CD have been provided to me.  They will be shredded as they are not my work product.   Her impression of interviews is what I will use.”

Agent Smith tells the ME that Eimers was able to breathe at all times:

During the interrogations, Officer Wanciak had told agent Smith that Eimers “was face down in the sand.”  During last week’s deposition, Officer Gary Lee Lovette admitted he positioned his knee next to Eimers head to keep it from moving.  Officer Wallis also testified that Eimers’ “face was in the sand” as did multiple civilian witnesses and photos taken at the hospital showed sand inside of Eimers nose.  Yet the information the ME will get from Agent Smith is that: “The FDLE investigation concluded that his face was not forced into the sand, but rather, as he struggled, his face moved back and forth across the sand. Audio recordings from the evidence revealed that Mr. Eimers repeatedly said ‘No.’ Such verbalization would not have been possible if he had been smothering in the sand.”

FDLE did not make any effort to conduct a reenactment.  However, a reenactment filmed by The Blue Paper demonstrates with absolute certainty that when a person’s shoulders are pinned down on the beach [officers admitted to pinning Eimers’ shoulders down], the first movement of the head to the side raises a berm of dry sand, which in turn rolls back to bury the nose and mouth.

Why Was Blood Flowing From Eimers Ears?

At last week’s deposition Officers testified that blood was flowing out of Eimers right ear and that Sergeant Zamora had ordered Officer Gary Lee Lovette to clean the blood off of his hands.  Lovette is heard on his Taser audio saying, “Me, I dropped like a f***ing bomb on his head.” Blood is clearly seen in photographs taken at the hospital both in Eimers’ right ear and behind his head on the gurney.  Yet Agent Smith notes in her report, “The photographs which were taken at the hospital, on the day of the incident, did not show blood in either of Eimers’ ears.”

In the end, the ME had no choice but to choose what Agent Smith’s version of the facts seemed to support: heart failure [ventricular fibrillation].

Kathy Smith signed off on the final FDLE report on June 19, 2014 and passed it off to the State Attorney.

For months The Blue Paper had reported that civilian eyewitnesses who had been working at the Southernmost Beach Café had not been interviewed and that others, who had contacted FDLE attempting to provide crucial testimony, had not been called back.  At this point, many are long gone or have forgotten most of the details.  “It is a fact that memory doesn’t improve with time,” said David Paul Horan, one of the Eimers family attorneys,  “All of these witnesses should have been interviewed immediately.”

It now appears that the Medical Examiner and even the State Attorney relied on an FDLE investigation that could have been tainted by conflict of interest and a lack of basic honesty on the part of the lead investigator.

11 Responses to “KWPD AND FDLE, PARTNERS IN CRIME?”