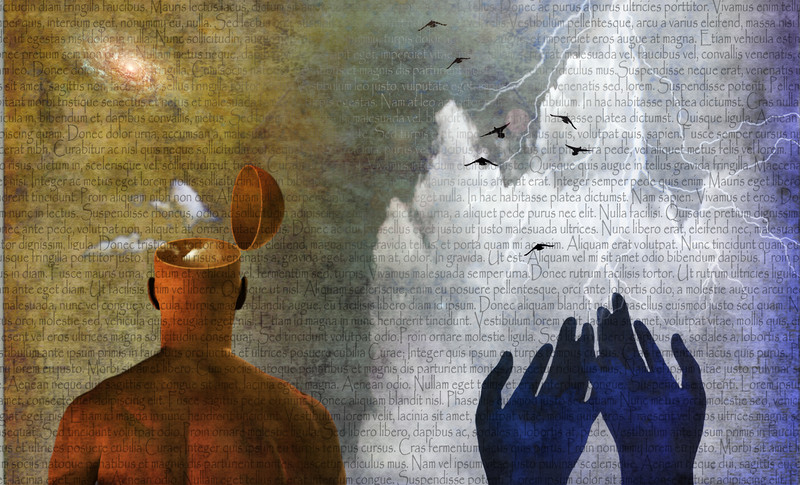 Anguish and struggle are  a part of life.  It doesn’t mean that we are doing something wrong or need to be saved. If we’re willing to acknowledge that these experiences are integral components of life, the fear and despair associated with these states of mind can be eliminated.

Focusing on exterminating or avoiding any mood, outlook or sensation, which are central to our  growth and evolution as human beings, is a neurotic expenditure of energy.

My resources, along with the time that I have left to live, can be spent blazing trails of exploration, increasing my awareness and expanding my consciousness; or I can be ‘type cast’ as a victim dependent on the duplicitous dealings of the material world for my care and well-being.

If I can surrender my groundlessness expectations as to how life should be, I am free to improvise, adapt and overcome the obstacles that come my way. Becoming open to the notion of accepting life on life’s terms, is a revitalizing and refreshing reality.

It provides me with an opportunity to abandon  conditioned ideas and ideologies that have bound me. Shedding the yoke of asymmetrical delusions and indoctrinations, has been a gateway to the ‘promised land’. If I am to be ‘born again’, those parts of my nature birthed through ignorance, must be extinguished.

Renowned scholars, doctors and spiritual teachers, through the ages, have shared their congruent insights concerning the Self-Realization of human beings.

Pema Chodron ( Author-Teacher-First Ordained American Woman Fully Ordained As A  Buddhist Nun) states:: ” All anxiety, all dissatisfaction, all the reasons for hoping that our experience could be different are rooted in our fear of death. Fear of death is always in the background”.

Sigmund Freud stated it this way “… we are all afraid of dying and at the same time even have an urge to die. Knowing that all life leads to death, the need to overcome this fear and embrace the reality of dying is the greatest challenge that we face in our lifetime”!!!

Pema Chodron writes: ” Death in everyday life could also be defined as experiencing all the things that we don’t want. Our marriage isn’t working: our job isn’t coming together. Having a relationship with death in everyday life means that we begin to be able to wait, to relax with insecurity, with panic, with embarrassment, with things not working out. As years go by, we don’t call the baby sitter quite so fast”.

In school systems that are doing  little or nothing to address the ‘totality of human experience’, there’s a vacuum sucking  upon the dangling morsels discarded  by unenlightened bureaucrats, hoping to formulate a strategy that will rescue our students from their ignorance and second-rate education.

Many of our public school districts, appear content  to  propagate a continuum of confused  and troubled automatons, who receive diplomas from government schools that they are unable to read.

As a society, if we shy away from providing an authentic, honest and accurate understanding of what is required to become a Self-Actualized individual, we will never effectively address the profusion of difficult and dangerous threats facing the people of the world.

Studying and comprehending the affinity of all sentient creatures, provides insight and understanding, as to the meaning of life. Living fully, we can allow others to live.

Although turbulent, uncertain and arduous; I’m grateful for the liberating experiences that have come my way. They provided me with an invaluable awareness. The discomfort and pain associated with my  life, has been the touchstone of all growth.

I’ve attempted to shed some light upon my own darkness, so that a way might be shown to those still lost.

Dr. Adele von Rust McCormick and Dr. Marlena Deborah McCormick refer to the fact that as members of the ‘Kingdom Animalia’, we share more than just an environment with other species. ‘Ontogeny recapitulates phylogeny’ outlines evidence that identifies ‘in utero’ development. It illustrates human embryonic growth through various stages, where we had ancestral structures such as tails, gills and flippers. In most instances these structures were absorbed or transformed into other organs or limbs before we were born.

It appears to me that these ‘in utero’ stages may be a reminder of the  common ground that we share with our distant  and not-so-distant relatives.

Drs. McCormick assert that aspects of our ‘reptilian brain’ roughly correspond structurally and functionally to neural tissues in other species. Affirming the  physiological basis for our identification and feeling of kinship with other animals.

Exploring the truth behind my existence, along with  the exactness of my relationship with other creatures and the ‘Cosmos’ at large, has been a welcomed and electrifying experience. It has triggered within me an insatiable yearning to discard old baggage, while constructing a ‘triumphant arch’ from which I may  proceed.

The fact of the matter is this, no one has ever reached their full potential nor achieved enlightenment, without acknowledging themselves as they truly are.

We peddle so much pretentiousness, disinformation and political correctness today. The weight of this burden has manifested itself with a rise in ‘pathological disassociation’ within our children. Their suffering has been expressed via an array of self- destructive behaviors. Many have chosen to ‘turn on, tune off and drop out’.

To whom shall we look for leadership, guidance and direction during these challenging times?  What government bureaucracy can we trust with our lives, fortunes and children?

A price has been paid for standing idly by, as we lie to ourselves: “Everything is OK”. Empty, zombie like rhetoric given in response to real threats and confrontations, across the board, has become an acceptable form of insanity.

Our vibrancy and collective consciousness as a people, in many instances, has been diverted towards arguing through petty political sound bites and partisan ideologies.

Has the excitement, enthusiasm and ‘idea’ that once was America, been lost???

John Donnelly, a resident of Key Largo was born, raised and went to high school in the South Bronx. Upon graduation he was awarded several scholarships to college.  He chose to enlist in the United Sates Marine Corps. While serving in Vietnam John was wounded in action. He received two meritorious promotions, one during combat. Upon discharge and return to America, John had a difficult time transitioning back into civilian life. He found himself homeless for the next 4 years. As he worked out some troublesome concerns, he began to yearn to make some sense of his experiences via education. He sought and received his GI Bill benefits. He applied and was admitted to New York University. He later transfered to the University of Miami where he graduated on the President’s Honor Roll. John secured a teaching position at a Maximum Security Prison Facility for criminally insane adolescents. While working there he earned a Master of Science degree from Florida International University. He graduated Summa Cum Laude.