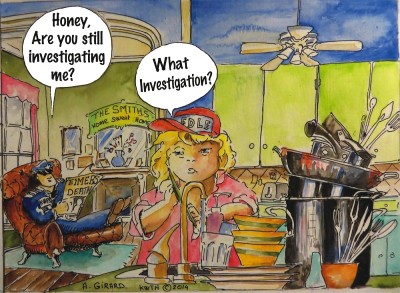 by Naja and Arnaud Girard…………

FDLE Special Agent Kathy Smith was escorted out of her Marathon office on Wednesday.  She has reportedly been put on administrative leave pending investigation of mortgage fraud.

The Blue Paper reported last week that Agent Kathy Smith and her ex-husband Scott Smith [at the time a Police Captain employed by KWPD] appear to have signed a false affidavit associated with an advantageous mortgage.  They borrowed $ 461,500 on a house they had purchased in 2004 for $ 132,500.  The home is now in foreclosure.  In the affidavit the Smiths swore to the lender that they had been “continuously married” even though they had divorced four months previous.

Special Agent Kathy Smith was the lead investigator in the death of Charles Eimers.  FDLE’s failure to secure Eimers’ body for autopsy, to return calls to witnesses volunteering information and to collect and protect crucial evidence, made the investigation ever more controversial.

When Agent Smith’s investigative report was finally published some seven months after the incident, it appeared that she could have deliberately mislead the Medical Examiner by not providing him with key information about the possibility that asphyxiation and/or trauma had been associated with his death.

An investigation into Agent Smith’s possible conflict of interest due to her relationship with KWPD’s Captain Scott Smith brought to light the apparent mortgage fraud that is now under investigation.