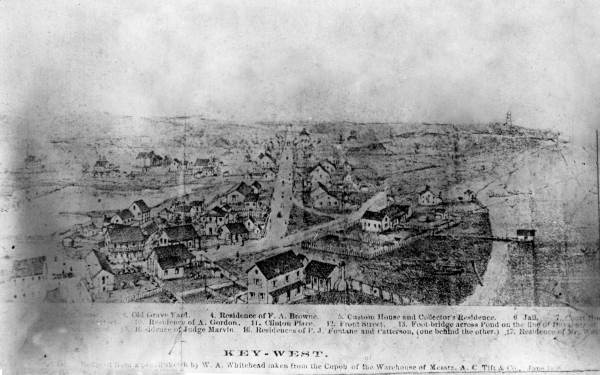 The area of lower Duval Street, around Greene and Front Streets, is often considered the center of the tourist area of Key West.  In the past several weeks, it has been the location of considerable flooding, as we have experienced higher than average rainfall.  The flooding has provided for some dramatic pictures, and become a curiosity for the island’s visitors.  A look back into history will explain how and why this flooding happens today.

In the 1830s, Key West resident and developer William Whitehead produced some very good maps and drawings of the island.  His works can be found in many sources including the Monroe County Public Library, and in several books and publications on Key West history.  The detail of these hand drawn perspectives is impressive.

Whitehead’s drawings of what today we call the lower Duval area, are dated 1838.  They were drawn in elevated perspective from the top of  Tift’s Warehouse (near today’s Mallory Square).  These drawings show at a glance why the area is so prone to flooding.  At that time, the area encompassing Duval St. from Caroline to Front streets, including Sloppy Joe’s, Old City Hall, Smokin’ Tuna, was a tidal pond of considerable size.  There was a long foot bridge across the pond, aligned with what is now the pavement on Duval street.  This pond also covered the area to Telegraph Lane, ending near the Pirate Well on Caroline Street.  Each day, twice a day, the water would flood and ebb through this pond, by way of a creek which was connected to the sea near where the A&B Lobster House now is.

Early Key Westers simply worked around this pond.  Large commercial structures developed along the shoreline of the ocean, dredging, filling, constructing docks, piers and warehouses.  The Navy built its works along the shore for using Man O War harbor. The townspeople were building structures and residing in housing built on the higher “landward” side of this salt water pond.

In 1846, when the developed area had become about twice the size of that shown in Whitehead’s drawings, things were forever altered by the force of nature. On about October 11, one of the strongest hurricanes to ever hit the island of Key West came across the Florida Straits.  Much was written about the force of that storm at the time, about the chaos, loss, death, and destruction it caused Key West’s citizens and sailors in the area.  Up to ninety percent of Key West’s buildings were erased, flattened, or deemed uninhabitable.  Ships were sunk or run aground,  and some people were swept away never to be seen again.  Bodies were exhumed from their graves at the cemetery near what is now Rest Beach. The storm did something else. It changed the land form of the island.

The pond’s connection to the ocean was permanently sealed off.  There was no more tidal flow.  The pond became still water.  By 1853, much of the town was being rebuilt from the hurricane of 1846, and the stagnant pond could be tolerated no more.  The owners of the submerged land were required to get rid of the stagnant waters on their lots.  The big pond was filled in and drained off, by a series of private efforts using who-knows-what kinds of methods and materials.  Unlike major projects of wharfing and land creation done by the government and large commercial interests, this pond was simply filled in, so it would seem.  One wonders how much settling of the grade has occurred since then.

With the elimination of the pond, downtown Key West was expanded in size, and we live with the results of those early developments to this day.  Look at the wide variety of lot size and structures there are today.  Bars, restaurants, shops and stores, homes, offices and apartments, can all be found within the area that was once the salt pond.   The modern waterfront area along that triangular part of the island bordered by ocean, Duval St., and Front St., has been totally rebuilt since the 1970s.  All the hotels, condos, time shares, all of the seawalls, all of the grounds and parking lots, have seen a change in land height, with much filling compacting and stabilization taking place in order to sustain the large properties there.

Now examine the corner of Duval and Green, on a regular rainy day.  We don’t need a transit or other surveyors’ tools to see that the centerline or crown of the streets is about the same height as the grade of the building foundations.  The edges of the streets and the gutters are the only areas that are lower, and only by about one foot.  All the land that surrounds this area is higher.  From Mallory Square to The Galleon, from The Westin to Whitehead Street to Eaton Street to Solares Hill, the old pond area is surrounded by higher ground.

The outline of the old pond, and the trough that was the creek, can still be seen on these very rainy days of 2013.  It is almost as if we are living within William Whitehead’s 1838 drawing, minus the foot bridge along Duval Street.   With no elevation to encourage a swift drainage, the water collects in this shallow basin, easily and naturally flooding  the area.    Blame it on the hurricane of 1846 if you wish.

The sea level is rising, bit by bit, year after year, and will do so for the foreseeable future.  Soon enough, in some of our readers’ lifetimes, it is likely that the accumulated runoff in the old pond area that is a nuisance today, will not have anywhere to go, and the forces of nature will once again  change the island of Key West.

(I want to credit and thank Corey Malcom and Tom Hambright for the excellent article “Understanding the Key West Hurricane of 1846”  which was published in the Florida Keys Sea Heritage Journal, vol.20 no.4, summer, 2010) 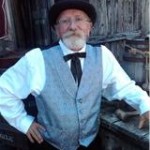 Karl Reutling is a full time resident of Key West, FL, originally from northern New York state.  He is an amateur historian, a student of local Keys history, mostly retired, and does work with historic Key West walking and bike tours.  He is a member of the Key West Maritime Historical Society.  The material contained in his article(s) is solely a product of his understanding of Key West history, and is in no way endorsed or sponsored by any organized historic group.  Reutling tries, wherever possible, to find primary source information, rather than rely on folklore.  You may find the information credible, or incredible, or somewhere in between.  Useful comments are welcome and encouraged.   He may be contacted at       karl.reutling@gmail.com