Brokering credible relationships with a sovereign state is the mark of a distinguished leader who is taken seriously and trusted by the partnering nations. Eliminating skepticism and disbelief decreases the threatening nature of cultures and ideologies that we’re unfamiliar with.

Unable to infiltrate and penetrate the regimes that ‘cross the red line’, we find ourselves lacking the confirmable intelligence necessary to determine if and how we should respond to the events in Syria. Lacking credible information concerning the splinter groups and outside factions warring  in that nation, we are powerless to accrue real time facts. Just as in Benghazi, we are clueless as to what is actually happening.

Rather than surveilling Americans, the NSA needs to secure some reliable and accurate information, which authenticates and corroborates the salient details developing in Syria. Without a verifiable and transparent assessment, we haven’t the means to design a plan of action. Our claim to be the purveyors’ of truth and justice does not substantiate an attack.

Unintended consequences abound once we launch cruise missiles targeting people from a country whom we’re in disagreement with. Only despots and tyrants unilaterally decide to pursue this course of insanity.

Unfortunately, our government lacks the gravitas and diplomatic astuteness to lead on the world stage when addressing issues of grave concern. Threatening and bullying others, in a neighborhood of bullies, has diminished our stature.

Our capacity to  indiscriminately kill and destroy is infamous (drone strikes,  bombings, air strikes, missile attacks, torture, kidnappings, assassinations and atrocities on the ground). It frightens and elicits hate from millions of families. The animus of nation’s injured  by our government’s brutality fans the flames of  terrorist recruitment.

The toxicity of this administration’s decisions, as they relate to foreign policy matters, is a grotesque side show entertaining our enemies and destabilizing the  world.

Despite the rhetoric of change and a brighter day, this administration composes kill lists, spies on its citizens and looks upon the murdering of children in distant lands as collateral damage.

All that glitters isn’t gold. Our Noble Peace Prize winner has plenty of blood on his hands. 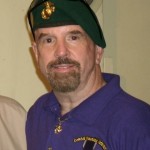 John Donnelly, a resident of Key Largo was born, raised and went to high school in the South Bronx. Upon graduation he was awarded several scholarships to college.  He chose to enlist in the United Sates Marine Corps.

While serving in Vietnam John was wounded in action. He received two meritorious promotions, one during combat.

Upon discharge and return to America, John had a difficult time transitioning back into civilian life. He found himself homeless for the next 4 years.

As he worked out some troublesome concerns, he began to yearn to make some sense of his experiences via education. He sought and received his GI Bill benefits. He applied and was admitted to New York University. He later transfered to the University of Miami where he graduated on the President’s Honor Roll.

John spent the next 20 years teaching elementary and high school students, while doing some coaching and instructing as an adjunct college professor.

John was the recipient of the Mayor Stephen P. Clark award, which recognized him as an “Outstanding Educator”. During this time he continued his work clothing, feeding and counseling the homeless.

John has been acknowledged by the Disabled American Veterans, the Miami Vet Center and the Veterans Council of Monroe County for his efforts on behalf of homeless and addicted veterans.

Recently, John was privileged to spearhead the successful release of a wrongfully accused inmate who faced 3 life sentences, without the possibility of parole, for crimes that he did not commit. This young man has since been returned to his twin sons and graduated with honors from one of our nation’s premier vocational colleges.

John continues to research and write on issues facing our ‘One Human Family’.