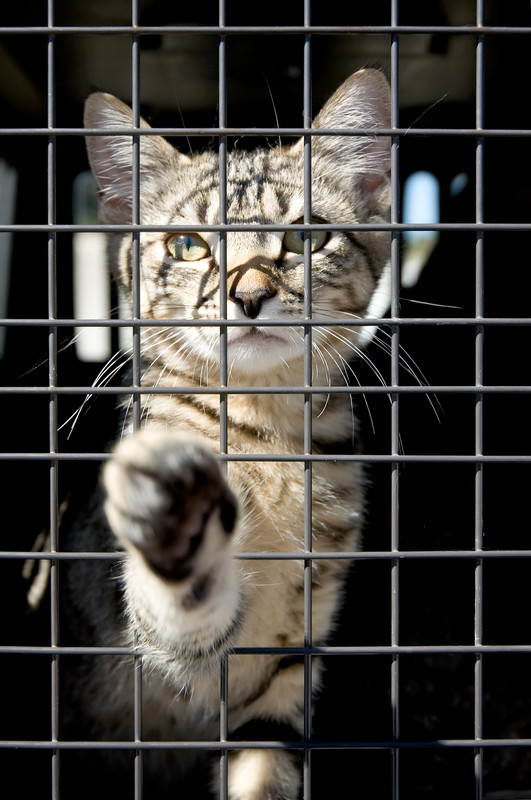 FWS staff were directed to “cooperatively interact” with  “affected parties” prior to launching their cat trapping agenda. Furthermore, all decisions reached between FWS and the “affected parties”, must collaboratively reflect the “humane handling and treatment” of these animals.

These directives aren’t being followed. FWS is cherry-picking data provided by bureaucrats dependent upon them for employment, to justify their inhumane conduct. FWS recruits support from organizations that benefit from agreeing with them.

I discovered a hunter trapping domestic cats directly adjacent to the private property of their owner. This cat hunter was under orders to place his traps next to the homes of citizens with cats, which resided on the boundary line of the ‘wildlife refuge’. These heavily baited traps were designed to lure and snatch these family pets. Some of them may have been placed on the private property of this pet owner. This family has lived in their home long before the establishment of a ‘wildlife refuge’ on their border.

FWS is fond of touting their ‘captured cat count’. There are at least three locations in Key Largo where this government agency is trapping on private land.

FWS has authorized armed officers, capable of arrest and the use of deadly force, to compel compliance to this insidious policy.

Traveling everyday throughout the property bordering the Crocodile Lake Refuge, I’ve never witnessed a cat on the government’s property. Based on the evidence, many citizens believe that the FWS has contrived a fraudulent dilemma that pits the survival of the Key Largo woodrat against domestic cats.

It’s a high stakes game. Whereby this government agency must appear to be effectively engaged in a noble cause, so that their enormous budgets and salaries are justified.

This over-reaching bureaucracy must somehow authenticate and substantiate their increasing burden upon the taxpayer. Pressure is on ‘refuge mangers’ to sell the legitimacy and value of a brutal practice that injuries and kills, without considering humane alternatives that have the backing of our scientific community.

Studies conducted by Dr. Julie Levy at the University of Florida, which followed a long-term Trap-Neuter-Release program, found that the population of felines living within a supervised cat colony declined by 66% over 10 years.

These cat colonies are provided with food, water and affection  by their caregivers. These cats are spayed and neutered, while being attended to medically, at no cost to the taxpayer. Every caregiver and cat owner that I know, never purchased or acquired their animals as pets. They came upon them disabled, injured and left for dead on the side of the road. Many of these creatures were tossed into garbage cans and dumpsters while they were still alive. These caregivers and owners heard the cries of these suffering animals and spared them a painful death. They took on the responsibility to care for them, never asking for anything in return.

Trap-Neuter-and Release programs are nationally accepted as a widespread life-saving practice, supported by major animal protection organizations such as the ASPCA.

Recently, a family’s pet cat that had never left their property, was lured by cat hunters from its owner’s home with baited traps that were placed right up next to their backyard. This house does not have any fencing  separating it from the ‘wildlife refuge’, which it boarders.

The family’s pet cat was beaten up during this cat trapping procedure, suffering facial lacerations and a bloody nose. At present, their cat is being evaluated by a Veterinarian.  An attorney commented, that enticing these creatures to leave the safety and protection of their homes is tantamount to a theft.

Along with paying a $ 175 fine, if this family did not search for and locate their missing cat, their pet would have been executed.

This inhumane policy has begun to backfire on the FWS. Churches, civic groups, veteran organizations and community leaders; are coming out against this cruel and injurious  practice. They are displeased and disappointed by what is being done to these innocent creatures.

A growing contingent of citizens have been contacting our representative, Congressman Joe Garcia, requesting that he put a stop to the barbarous, inhumane and possibly illegal conduct being exhibited by the FWS.