We’re past Halloween, but judging by the on-going Obamacare fright-fest, you’d never know it.  And it’s not only the standard Teapublican-beholden claptrap from Faux News. 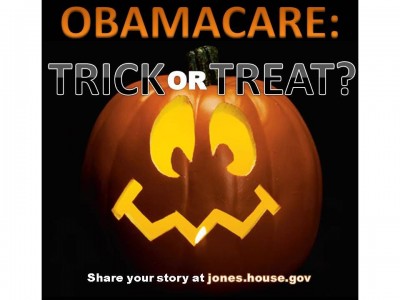 Catch CNN or other network coverage — even the late-night comedians – and you’d be hard-pressed not to conclude that Obamacare had become ObamaScare.  So much so that all more serious issues of trashing the economy and ruining our country’s debt rating – issues that are still on the table with a short fuse, have totally dropped off the radar.

Which is exactly the point…  After their abject failure to tie Obamacare to the budget and the credit ceiling, the Teapublicans were bestowed with a mighty gift to keep their drive alive.  On a silver platter they were served a plate of maximum distraction for the masses.  The Obamacare people had committed the most visible of sins.  They invited the masses to take a ride on their vehicle – their portal website – a vehicle that even non-technical observers THINK they can speak authoritatively about.  And that vehicle was defective.  The horror!

It was a godsend – now they could turn the valiant knightly image (as seen by so many) of Obamacare on its head, and get sympathy even from its defenders.  All they had to do was pretend that – being just another website like everyone deals with every day – putting it together should have been easy. And since the Obamacare team couldn’t accomplish a clean launch, by implication they couldn’t handle Obamacare either.  Q.E.D.  Game over.  Toss it all in the trash.  The Teapublicans quickly asserted that these website problems had accomplished what their stubborn congressional behavior had failed at.

Of course anyone with a lick of sense knows that a web portal of this magnitude is a major undertaking that wasn’t going to be easy to launch – especially under the rigid constraints imposed on it by the political process that established the ACA.  But (understandably) that expectation wasn’t consoling to the masses trying to use the portal.  Indeed there were annoying problems and lots of people couldn’t accomplish much in those first days. 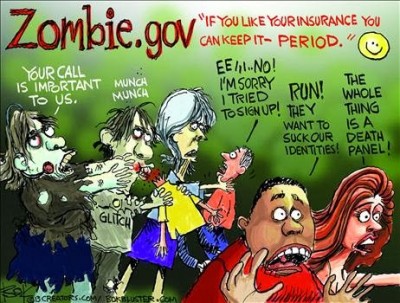 The Teapublicans pounced, and proceeded to seek out and highlight every disgruntled user.  The efforts of the administration to correct the problems were heavily ridiculed.  Officials involved with the site were called before Teapublican-headed House committees to be lambasted.  All the stops were pulled out in denouncing anything connected to Obamacare.

But behind the scenes the many of the problems with the site were being corrected and registrations and sign-ups increased. Others used the phone to sign-up.  And stories slowly emerged about happy newly-insured people who never could before.

To offset the increasing satisfaction, the detractors quickly trotted out an Obama sound-bite from the era of the passage of the ACA.  Obama had claimed that “if you like your current plan, you can keep it.”    He failed state the obvious: that the “current plan” had to continue to exist.  Of course this was twisted into an accusation of lying.

But some of the existing plans were JUNK — only good for big profit to fly-by-night companies, and would drop the customers in a minute if they put in a claim.  It’s doubtful that ANYBODY holding those plans actually LIKED them.  But that “if you like it” part of Obama’s quote was ignored when the detractors had a job to do….

Sure enough, the JUNK plans chose to kick everyone out rather than reduce their obscene profits to meet the basic requirements of the ACA.  Though most all of the holders of those policies can now get BETTER plans at a BETTER price that they WILL like under Obamacare, the Teapublicans continued to label him a liar. So what else is new…. 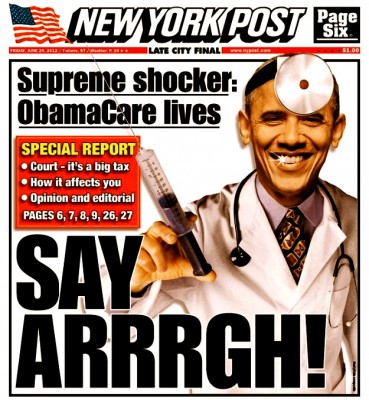 But speaking of lying, there are also outright lies from the pundits in their ObamaScare tactics.  Hannity trotted out a small business owner claiming Obamacare forced him to drop employees – but when checked out, that business only had FOUR employees and didn’t come under Obamacare at all.  Another family was trotted out claiming that they were going to be forced to pay 75% more (than their Blue Cross plan) for Obamacare, but when investigated were found to have never even applied.  When they did, their new plan was 63% LESS than before!  Another complained that their rates were skyrocketing because of Obamacare, but when confronted admitted they, too had not actually checked.  In reality they found they will save 60%, and their child with a pre-existing condition will FINALLY be covered.

Every day much of the corporate media focuses on isolated cases of what APPEARS to be Obamacare problems, but fails to bother reporting on the masses who are finally successfully getting the insurance they’ve needed for years.  Amateur newshounds think they’re breaking a big story with the guy who lost his junk policy, but doesn’t finish with the story of how happy he was after actually following up.

If you have job coverage and think your existing insurance is so great, just wait until you leave that job.  You COULD have ended up with no insurance at all, at a time in your life where your body starts to wind down from your youthful wonder years.   I speak from experience here.  THIRTY years with IBM, and only 4 years after (forced) retirement every bit of the post-retirement healthcare support will be gone.  Without Obamacare I would be looking at NO affordable insurance.  And MY case is much better than most.  It could and WOULD happen to you – without Obamacare.

THAT was much scarier than anything the ObamaScare posse can spew.  Thank you, Barrack, for fighting for the PEOPLE here, over the corporate profiteers of the old ways.  There’s much less to be scared of. 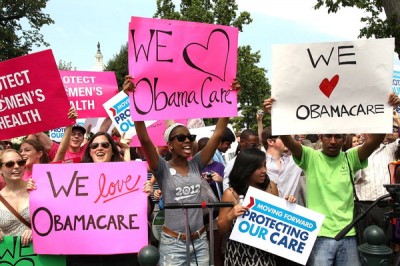