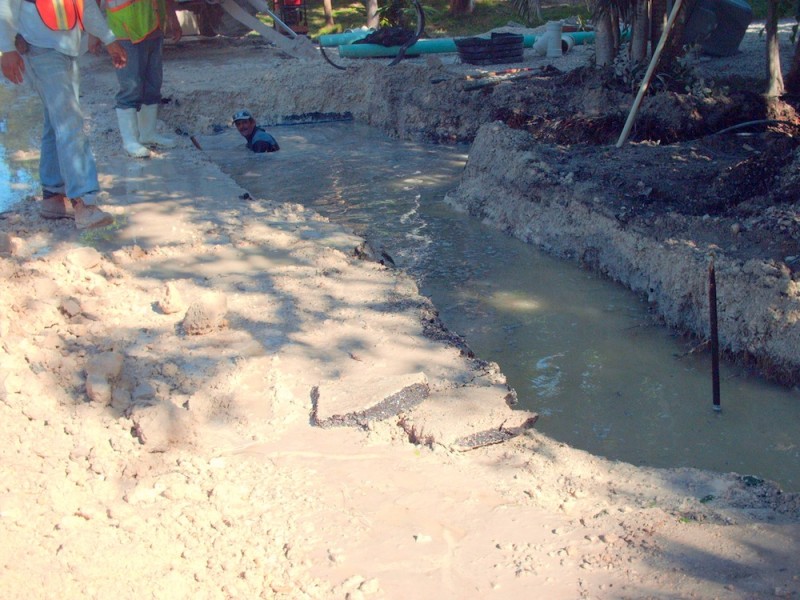 Anyone who has lived in the Keys for any length of time knows that the ground we live on is very porous. Made up of either coral or limestone rock, the surface of these islands resembles flat colanders, allowing everything that falls on it to eventually pass directly through the ground to the salt water below, a mere few feet.

When the contractors dug trenches for the sewers in Marathon, those cavities immediately filled with salt water that rose and fell with the tide. As a result, anything that is sprayed or poured onto the thin skin that separates us from the ocean below finds its way into that ocean.

So, for example, herbicides that anyone sprays throughout the Keys would not only kill weeds and other plants but also would eventually become part of the ecosystems in our oceans.

Who sprays in the Keys?

Every big box and small hardware store sells Monsanto’s Roundup or generic versions of the same chemical. It’s easy to conclude that people buying these products are spraying it on their lots to kill weeds. However, it’s difficult to document that use.

On the other hand, it’s easy to document which governmental agencies are just by asking them. The Blue Paper contacted most of these agencies and discovered that, for example:

Randy Sterling, the recreation facilities manager for Key West reports that, “We do use herbicides at all of our fields. We use Roundup for weeds along our fence lines, Pros Edge for broadleaf weeds on all fields, and Barricade [a so-called pre-emergence herbicide] on a broad spectrum of weeds and grasses on all fields.”

Children play on those fields.

Carlos Solis, public works manager for the city of Marathon, said his department uses Roundup on the medians, spraying for weeds at the edges of that area that runs up and down U.S. 1.

Marty Slavik from the Lower Keys Monroe County Roads Department reported that, “We use Roundup only around the guard rails and the rip rap around Garrison Bight on the incline to the bridge.”

By the way Riprap is rock or other material used to armor shorelines, streambeds, bridge abutments, pilings and other shoreline structures. Rocks around water.

Are Roundup and other herbicides bad for the Keys environment?

John Glista who manages the Monroe County road department in the Upper Keys says it best.

“The reason I stopped using Roundup is that I’m an avid scuba diver and I know it leaches into the groundwater so I’m against using it. We weed whack now. Everything I read is that stuff is not good for the environment so I won’t use it.”

The effect of the chemical in Roundup, glyphosate, is disputed. Monsanto, as one would expect, claims that the chemical causes no harm to animal or aquatic life and dissipates very rapidly.

According to the company,

“The broad-spectrum, post-emergence, glyphosate-containing herbicide Roundup® eliminates over 125 kinds of annual and perennial weeds. It is not active in soil and is readily metabolized to innocuous products… Glyphosate inhibits a key enzyme found primarily in plants, having no effect on mammals, birds, fish, or insects.” [emphasis added]

There is so much counter evidence to Monsanto’s claims that it would take a book to summarize it all. In terms of environmental damage here are some citations that should interest everyone who considers spraying this material in the Keys.

For example this, published in the journal Environmental  Monitoring and Assessments:

New research on the DNA-damaging effects of the popular herbicide known as Roundup® indicates that it can do significant harm to fish even after short-term, environmentally low concentration exposures in the parts per billion range (μg /L).[i]

Later in the article the researchers describe “Some of the ways in which glyphosate formulations have been experimentally confirmed to disrupt, mutate, alter or kill.”

Pittsburgh assistant professor of biology Rick Relyea found that Roundup, the second most commonly applied herbicide in the United States, is “extremely lethal” [emphasis added] to amphibians, and these results may provide a link to global amphibian population decline. According to the University of Pittsburgh, this study is one of the most extensive studies of the effects of pesticides and herbicides on non-target organisms in a natural setting.

And again from Mother Earth News,

A new study in the respected journal Toxicology has shown that, at low levels that are currently legal on our food, Roundup weed killer could cause DNA damage, endocrine disruption and cell death. The study, conducted by French researchers, shows glyphosate-based herbicides are toxic to human reproductive cells.

And one presumes animals and fish also.

But what about us?

Marty Slavik from the county roads department told The Blue Paper that his crews wear gloves and respirators when they spray Roundup. That’s significant because Roundup and other herbicides are very toxic to humans.

An article on website Truthout.com reported just how toxic these chemicals can be.

“For years, scientists have been trying to unravel the mystery of a chronic kidney disease epidemic that has hit Central America, India and Sri Lanka. The disease occurs in poor peasant farmers who do hard physical work in hot climes. In each instance, the farmers have been exposed to herbicides and to heavy metals. The disease is known as CKDu, for Chronic Kidney Disease of unknown etiology.”

The article went on to say that,

“[Dr. Channa Jayasumana, and his two colleagues, Dr. Sarath Gunatilake and Dr. Priyantha Senanayake] know that political changes in Sri Lanka in the late 1970s led to the introduction of agrochemicals, especially in rice farming. The researchers looked for likely suspects. Everything pointed to glyphosate. This herbicide is used in abundance in Sri Lanka. Earlier studieshad shown that once glyphosate binds with metals, the glyphosate-metal complex can last for decades in the soil.”

As a result both El Salvador and Sri Lanka have banned Roundup (glyphosate). These countries aren’t the only ones.

The Healthy Home Economist reports that the Dutch Parliament in recent days voted to ban all glyphosate-based herbicides, including Roundup, after 2015.

Esther Ouwehand, Dutch Parliament member who introduced the successful motion to ban the herbicide for private use, said:

Agricultural pesticides in user-friendly packaging are sold in abundance to private persons. In garden centers Roundup is promoted as harmless, but unsuspecting customers have no idea what the risks of this product are. Especially children are sensitive to toxic substances and should therefore not be exposed to it.”

Garden centers in France have already pulled Roundup from the shelves. The same action will occur soon in Brazil.

And if one requires even more evidence, according to the highly respected science journal Nature,

“Alarming new research published in the journal Neurotoxicology and Teratology supports the emerging connection between glyphosate, the active ingredient in Roundup herbicide, and neurodegenerative conditions such as Parkinson’s disease and Parkinsonian disorders.

Published this month [April, 2012], the new study entitled ‘Glyphosate induced cell death through apoptotic and authophagic mechanisms,’ investigated the potential brain-damaging effects of herbicides, which the authors stated ‘have been recognized as the main environmental factor associated with neurodegenerative disorders, such as Parkinson’s disease.’”

Roundup not the only potential villain

Roundup is not the only problem herbicide. Dow has introduced a product called Enlist Duo. It consists of a chemical called 2,4-D that some may remember as being used in Viet Nam as the defoliant Agent Orange.

A 2004 study by Purdue University scientists showed that,

“Scottish terriers [yes, Scottish terriers!] exposed to lawns treated with herbicides such as 2,4-D had greater risk of bladder cancer than other terriers. A 1991 National Cancer Institute study concluded that dogs exposed to just four lawn treatments a year significantly increased their risk of malignant lymphoma.

The EPA says that 53 endangered species, including four mammals and five birds, would be potentially at risk from increased 2,4-D use in the Midwest, where corn and soybean farms abound. The EPA said the risk could be managed by confining 2,4-D to fields, but it did not explain how wildlife and plants would be kept out of pesticide-contaminated fields.”

The decision is easy

Many European countries abide by what has become known as the precautionary principle or precautionary approach. This dictum states that if an action or policy has a suspected risk of causing harm to the public or to the environment, in the absence of scientific consensus that the action or policy is not harmful, the burden of proof that it is not harmful falls on those taking an action.

That’s why those countries have banned chemicals such as glyphosate and genetically modified crops.

To put it more simply, why take a chance. Why risk the health of our oceans, the aquatic life that resides in them, and, yes, the humans who live here, to kill weeds.

Watch for Fouling Our Next Part III: Methods for killing weeds without toxic chemicals.