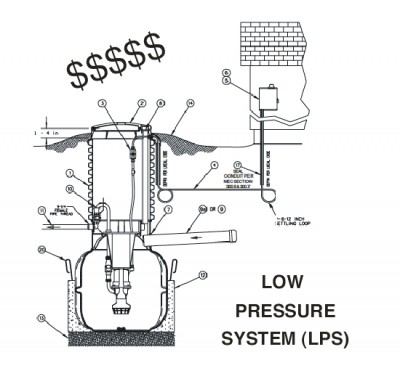 Given the choice of a system that is a bit more expensive initially, versus one that will cost almost twice as much over its lifetime, the Florida Keys Aqueduct Authority (FKAA) has chosen the expensive, long term option.  This is an option that every resident in the Florida Keys will pay for through the uniform rates charged by FKAA.  Over the life of the project, it will cost all Keys ratepayers almost $30 million more.

The proposed Cudjoe Regional Wastewater System (CRWS) will be a difficult and complex project.  It extends from the north side of Big Pine Key to Lower Sugarloaf Key, well over twenty miles.   One of the difficult decisions is the type of technology to use, particularly for remote and distant homes where a traditional gravity system is not technically feasible.  One option is to use a Low Pressure System (LPS) which is simply a buried tank with a grinder pump that chews up the sewage from a single house and pumps it to a central facility. This is a proven technology, but one that has very high operating and maintenance costs and has poor performance in salt environment and in tropical storms.  For example, the Key Largo system of 9,800 homes uses 152 grinder pumps.  By comparison, FKAA proposes using 2,800 grinder pumps for the 8,800 homes in the Cudjoe System.

Why would they make this type of a decision?  It stems in part from the uncertainty and level of funding the County was facing five years ago when the design was being selected.  FKAA felt driven to buy the lowest cost system regardless of its inefficiencies, long term costs, and burden on the homeowners.  What they now propose installing makes no sense given that adequate funding sources have become available and the bids came in under budget.  A look at the maps of the communities being affected shows a mix of gravity and grinder pumps in most subdivisions, with no apparent logic.  In one community, streets that are the same length with the same number of homes have different technologies. No one is suggesting we can eliminate grinder pumps, only that they should be used in the most cost effective manner.  FKAA has stated that it would cost $30 million to do all gravity.  This is a guess, since this option has not been engineered.  Our analysis suggests that maybe two-thirds of the proposed grinder pumps could be gravity at an incremental cost of $5 million to $8 million, well below the $30 million claimed.  The difficult outliers which would require miles of gravity lines would still be LPS.  Given that the bids have actually come in well below the budgeted amount, no new sources of money would be needed.

The residents of Cudjoe Gardens at MM21 first became aware of this silliness in February and began to investigate.    What we found was alarming.  The modeling performed in 2008 to support its decision was filled with serious flaws.  In fact there are seven serious errors, every one of which favored the grinder pumps.  If you are a gambler, you will know that the odds of seven random events occurring in the same direction seven times are 127 to 1.  Lucky us!

The residents of Cudjoe Gardens asked what all gravity for our subdivision would cost.  The data provided suggested it would be over $700,000.  However, this proposed revision had many errors and assumed large lift stations and drain lines would be used even for a dozen homes.  When we reengineered the Cudjoe Gardens example, using actual number of homes, the appropriate sized lines and lift stations, we found there is very little cost difference between gravity and LPS.

The corrections showed that the slight advantage the LPS had in the original analysis ($2 million) became a $30 million deficit when the right analytical methodology was utilized.  Further, the grinder pumps are a real burden to homeowners.  They require a separate electric source, with installation paid by the homeowner.  They must be treated with a gentle hand.  No sand, coral, shells, coins, plastic toys, diapers, etc, or the pumps will fail.  Each unit has a pump, motor, check valve, electrical control system, anti-siphon valve and two level switches.  All of which will eventually fail.  When the unit does fail, the homeowner must severely limit use of toilets and other water sources or there will be sewage spills, a violation of State law.  During extended electrical outages, portable generators must be used to pump each of the units on a daily basis.  The analysis indicates that a total of thirteen trucks working twelve hours a day, seven days a week will be needed just to give minimal use to homeowners during outages.  This proposed system will require a significant increase in the staffing at the Aqueduct Authority to repair and replace these units and to respond during storms.

Everyone agrees that grinder pumps will be necessary in remote regions of the Cudjoe System.  However, the plan currently proposed has twice the lifecycle cost of gravity, is intrusive, unreliable and simply a poor decision.  The issue has now been brought to the attention of the County Commissioners, the FKAA Board of Directors and our State legislators.  Hopefully, common sense will prevail.

Editor’s Note:  Walter Drabinski, is President of Vantage Energy Consulting LLC which is located on Cudjoe Key.  Drabinski spearheaded a review of the analysis FKAA based its decision on.  Mr. Drabinski has over 30 years of consulting experience performing economic analysis, construction management, and operations and frauds audits of utilities.