Many well-known phrases owe their existence to Mark Twain. “There are three kinds of lies:  lies, damned lies and statistics” is one of his most ironic and cynical.  Twain popularized that truism in the 1906 publication of “Chapters from My Autobiography.”

Slightly less than 100 years later, an event occurred which was so catastrophic, that it changed the lives of every one of us and our children. As I write this essay, America observes the twelfth anniversary of September 11, 2001… a date forever seared in history as “9/11.”

One day’s events led us into two wars and a recession. We watched in horror and wept over the images we couldn’t believe occurred. Little did we know how dramatically our lives would change from that point forward.

And yet, there were some businesses and industries which actually profited from America’s misery. Manufacturers of war materials, like Haliburton, come to mind. Oil prices soared and companies like Exxon, BP and Haliburton (again) made record profits. They were heady times for some, thanks to the combination of Osama bin Laden and Dick Cheney.

Much closer to home, the cruise industry capitalized on the American public’s fear of flying and traveling abroad, by repositioning ships from Europe to meet the increased demand for travel that did not involve jet planes.  Key West tourism businesses affiliated with cruise ships enjoyed windfall profits which haven’t been matched since.  How many times have you heard essentially the same statement, “Cruise ship visits have fallen dramatically since 2003!”?

I can’t think of anything else in the world that we compare to such a seemingly arbitrary date.  Granted, there are frequent historic comparisons to ten years ago, but the reason we don’t hear “ten years ago” is because we have never been interested in ten years ago. For quite a number of years, all we’ve heard about is the decline of cruise ship calls “since 2003.”

It’s time to shed a little historical context on 2003… 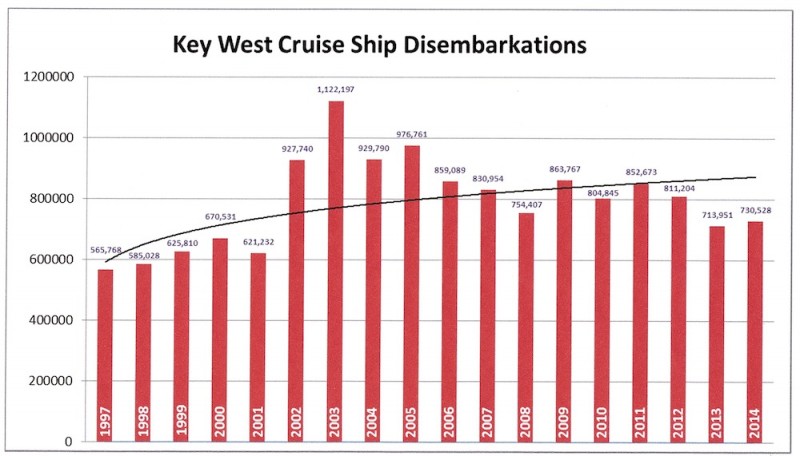 (all figures – City of Key West)

The fourth quarter of 2001 was a total disaster for the U.S. economy, especially tourism. The reaction to the terrorist attacks was immediate and intense. Airports which were previously teeming were suddenly empty. Going into 2002, Key West began to show signs of recovery. Late bookings saved the high season from disaster.

The immediate year following the worst terrorist attack in our lifetimes turned out pretty well for the cruise industry. But it was the next year, 2003, that the industry was fully able to capitalize on repositioned equipment, new itineraries, published brochures and advance bookings.

While so many Americans were still recovering from their shock and grief, the cruise industry benefitted and their Key West affiliates wallowed in windfall profits… the disparate results of the same tragic event.

Economists would describe much of the decline that followed 2003 as a market correction to a once-in-a-lifetime aberration, followed by a recession.

Dredging proponents prefer to label 2003 as “The Baseline” and they’ve been crying in their Champagne ever since.