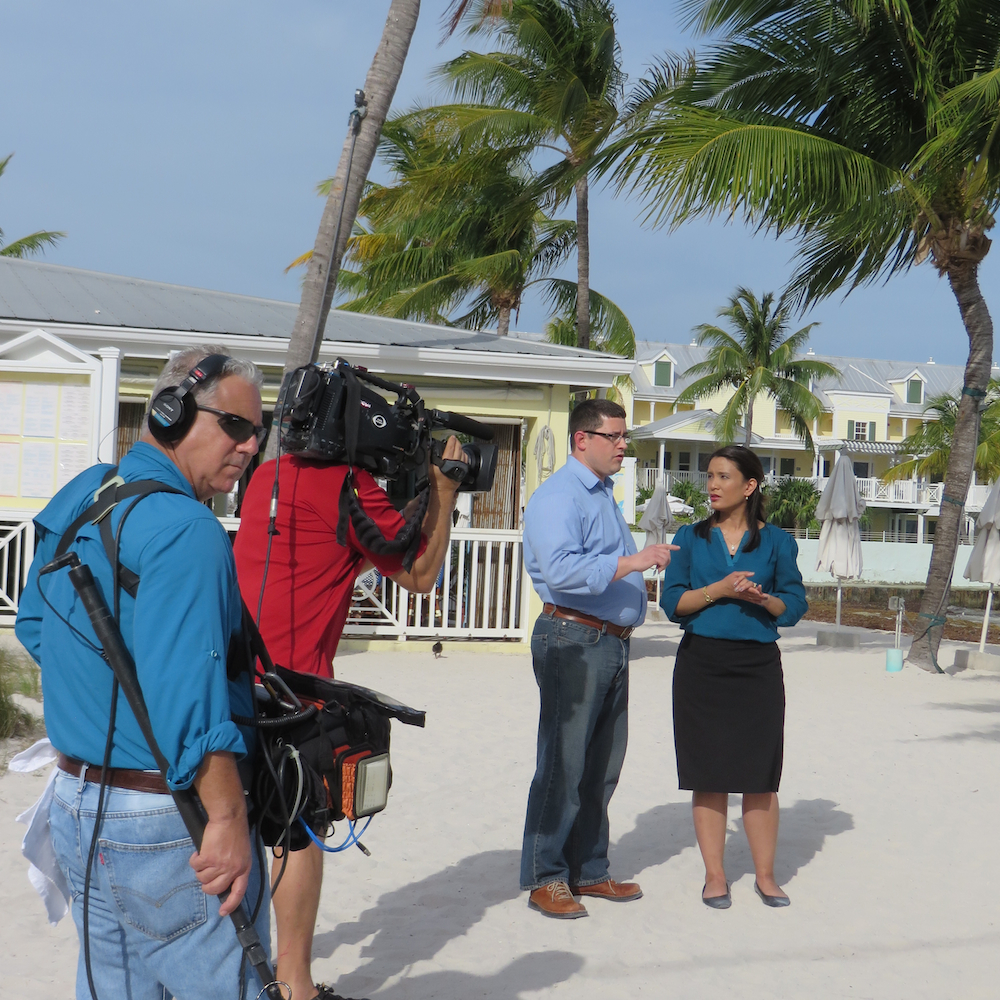 The death of Charles Eimers while in the hands of Key West police officers is now getting national attention.   CBS investigators were in town this week researching the circumstances surrounding the death of Eimers, the apparent cover-up involving near cremation of the body before autopsy, destruction of evidence, lying to emergency medical personnel, and finally the shocking conflict of interest that is tainting FDLE’s investigation of the case:  FDLE’s top investigator in the Eimers case, Kathy Smith, is the ex-wife of KWPD Captain Scott Smith.

CBS flew in on Wednesday with Treavor Eimers, the victim’s son, and a full camera crew.  We sat with CBS Investigative Producer, the very charming, Megan Towey, for a two-hour lunch, and in the words of Mel Brooks, it must be ‘good to be the King!’  Apparently when these guys have an issue with obtaining records from FDLE they have the office of Pam Bondi, the Florida Attorney General, on speed dial and a lot of weight to throw around.  Not quite the same as being a Blue Paper reporter.

When we asked what made this story one of national interest, Key West was immediately named a factor, “People come to Key West for the laid back attitude, but in the case of Charles Eimers he ended up dead before his first day was over.”  And of course there is also the obvious irreconcilable difference between police officers’ statements and the cell phone video produced by a passerby. “That is not all that common,” said Towey.

“I could see how my dad would have loved it here,” said Treavor Eimers when we finally met him on Thursday afternoon,

“He was a very easy going person.  He would talk to anyone.  He would have met people, ridden around on a bicycle, looked for a small room and tucked in for the winter.  That was his dream.”

Apparently CBS has been interviewing witnesses on camera and also paid a visit to David Horan and Darren Horan, the Eimers family attorneys.

Meanwhile, The Blue Paper also continues its investigation and unfortunately this week the image of how the death investigation is being handled by local law enforcement has again sunk deeper into the dark side.  A mysterious investigator who went around questioning those on scene immediately after Charles Eimers was taken away in an ambulance, has apparently been identified.  He was officer Nicholas Galbo of KWPD.  This again is very disturbing:  Galbo was seen collecting eyewitness statements on Thanksgiving Day, but he is also one of at least four officers known to have been physically involved in Eimers’ fatal arrest on the beach that same day.  Why was he allowed to be  involved in the investigation?

These are the facts:  Shortly after a comatose Charles Eimers was taken away in an ambulance, a team of two plainclothes officers interviewed eyewitnesses at the seaside restaurant.  One of the two was Detective Todd Stevens of KWPD.  However, eyewitnesses we interviewed said they believed they were speaking with FDLE investigators.  Witnesses reported feeling threatened and intimidated by remarks such as, ‘your record will be scrutinized’ and ‘do not talk to reporters’.

At about the same time, another KWPD officer was running around, also collecting witness statements.  He gave his card to one eyewitness, so we now know that he was Officer Galbo.  Galbo had his hands on Charles Eimers when he lost consciousness. He took part in the police chase right from the start.  In the report he filed, ‘only pursuant to orders and to avoid potential punishment,’ Galbo wrote:

“I began to parallel the vehicle’s direction of travel on Simonton Street.  The vehicle came to rest on the beach at the Southernmost Beach Café.  When I arrived on scene the subject was proned out on the sand.  I observed several officers already on scene attempting to place the subject in handcuffs.  I noticed officers did not have gloves or any PPE’s on so once the subject was detained I switched with them so they could clean up and prepare.  I controlled the subject’s legs from kicking up at officers.  As the subject was being lifted he became unresponsive.  I assist[ed] in immediately removing the subject from restraints.  While other officer began to perform life saving techniques I started checking his pants pockets and jean jacket pocket for any type of medication or narcotic he may have taken or require to help assist.  First aid/CPR was administered as well as the use of an AED until fire fighters and paramedics arrived on scene and transported the subject to Lower Keys Medical Center.”

Now you would think an officer who had been present at the time of death: 1) knows exactly what happened and doesn’t really need to get the facts from witnesses and 2) if there is a need to investigate the possibility of excessive force in Eimers’ death, the last person you would want conducting any sort of investigation would be one of the very officers who could be responsible for that wrongful death.

“A.] Any member, while on-duty, or off-duty, whose actions in the line of duty result in death or serious bodily injury to another human being, shall be immediately removed from the line of duty until a preliminary Administrative Review is conducted.”

However, not only did none of the officers get put on administrative leave pending investigation, but officer Galbo was allowed to canvas the scene and interview witnesses.  In fact, Galbo actually filed two witness statements that he collected on Thanksgiving Day:  one statement made by Lesley Charlene Knotts and another by Jim Burton.  Both described Eimers’ car having “sped through the intersection.”  Burton also wrote, “Officers did a good job of flushing him without increasing panic.” These reports, favorable to the officers, and concerning only the car chase are for some reason the only witness statements that made it into evidence.

The other statements from eyewitnesses reporting multiple use of a Taser, unnecessary violence, and “legalized murder on the beach” as one witness put it, were not reduced to writing and were never filed in the case.  We had asked KWPD Public Information Officer Alyson Crean for all witness statements back in December.  Alyson Crean, sent us the two statements from Burton and Knotts, saying they were “everything there is.”  Those two Statement Forms were notarized by Officer Galbo.

“The staff at the hospital told us right away that Eimers was never going to leave,” said Chief Donie Lee,  “I decided to immediately treat the case as an in-custody death.”  So the question is, even if the Chief didn’t believe the officers involved should be suspended pending investigation, why did he allow one of his officers [who had been directly involved in events that led to Eimers’ death] to return to the scene and meddle with witnesses?

Officer Galbo had made the arrest; he knew what had happened.  Why would that particular officer show so much interest in what other people had seen?  The post arrest behavior of the officers is looking more and more like an emergency damage control effort and less and less like a quest for the truth.   It will be interesting to see what CBS News makes of this story.