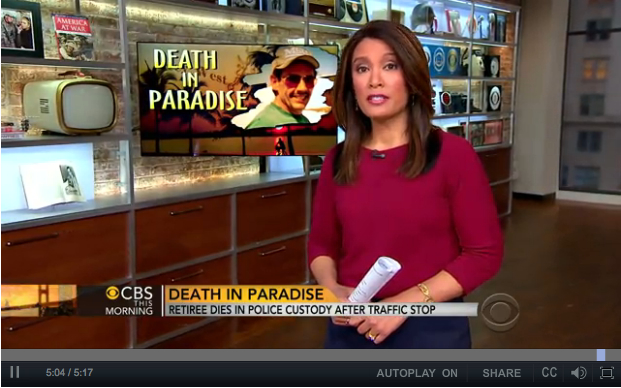 CLICK ON IMAGE FOR LINK TO CBS VIDEO AND ARTICLE

The CBS News report on the death of Charles Eimers on Thanksgiving Day finally aired last Wednesday morning.  CBS News filmed a portion of their ‘CBS This Morning’ show on South Beach, where the arrest of Eimers by multiple Key West police officers occurred.

But the television report focused less on the arrest itself and the possible use of excessive force leading to Eimers’ death than on what happened after the arrest. They showed excerpts from medical records that show that police apparently claimed Eimers ran away, resisted arrest, and did not have a pulse by the time the police got to him.  An account which was then flatly contradicted by a video shot by a tourist, which shows a radically different version of the facts.

CBS picked up on the fact that police very nearly allowed Eimers’ body to be cremated before the required autopsy and the fact that the FDLE investigation everyone has been endlessly waiting for is headed by FDLE Special Agent Supervisor Kathy Smith, who is the ex-wife of KWPD Captain Scott Smith, the supervisor of the officers involved.

Mayor Cates declared  the CBS report one-sided and unfair to the police.  Cates told the Key West Citizen on Thursday, “The police officers have rights too.  We’re going by the letter of the law.”

Arguably, however, it is the fact that both FDLE and KWPD seem to have lost all of their rulebooks on how the investigation should be conducted that brought the affair to national attention.

Under FDLE’s Ethical Standards of Conduct Rule 7.1, an agent is prohibited from getting involved with an investigation concerning a relative [or former significant other].  Therefore Kathy Smith should not be involved in evaluating the responsibility of her ex-husband and father of her child, Captain Scott Smith, in the mishandling of Eimer’s body, which is a criminal matter under Florida Statute 406.12.

Then, there is the lying to medical personnel who came to rescue Eimers. Under KWPD Policy 02.08.06 officers have the duty to make sure the arrestee is provided adequate medical care.  Certainly claiming Eimers had no pulse when they got to him after he “collapsed” instead of describing the violent arrest and possible asphyxiation was not the best way to guarantee “adequate medical care”.

If Mayor Cates decided to actually open those books, as indicated in his “letter of the law” comment, he would have to accept that procedures are not being respected.

This is what “FDLE’s book” says:

“Pending the arrival of FDLE personnel, the ranking member of the host agency [KWPD] will insure that the scene remains secured, physical evidence is preserved and that all enforcement and citizen witnesses are identified and separated pending initial interview.” [Memorandum of Understanding between FDLE and KWPD]

Now it is clear that none of that happened.  According to an eyewitness, not only were many of the witnesses driven out of the area while Eimers was still lying motionless on the beach, but those remaining on scene [because they worked there] were intimidated by KWPD officers, at least one of whom had been physically involved in the incident that led to Eimers death.

Yes, the national media coverage is a black-eye to Key West, but the media attention and the lawsuit [which some believe to be premature] was precipitated by the fact that it had become absolutely obvious that the investigation was not occurring by the “letter of the law” and that crucial evidence was being lost or compromised. “It is an uncontroverted fact,” says David Paul Horan, an attorney representing the Eimers family, “that people’s memories do not improve with time.”

With all due respect to the Chief and Mayor Cates, something had to be done before all of the witnesses disappeared or were influenced or had simply forgotten what the facts were.  Today, nearly six months later, key witnesses, interviewed by the Blue Paper, have still not been contacted by FDLE.

If truly, no one was at fault, the officers behaved appropriately, and the City doesn’t have a policy to rough-up homeless people and to tolerate violent behavior from officers, then why the lies and cover-up?

2 Responses to “CBS: “DEATH IN PARADISE””