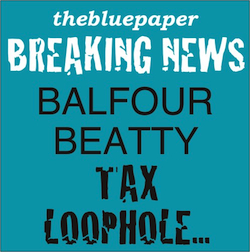 Looks like Balfour Beatty may be at it again!  Have privatized military housing contractors been ratted out while trying to sneak a new tax exemption bill into the Florida Legislature?

Balfour Beatty’s local military housing affiliate, Southeast Housing LLC, owns all of the Navy family housing units in the Key West area.  Over a year ago The Blue Paper blew the whistle on the fact that the British conglomerate had failed to pay property taxes on its Key West properties [over 890 units] since 2007.  Balfour is still suing over the issue and hopes Circuit Court Judge David Audlin will soon render a decision that will get them off the hook for what is now well over $ 11 Million in back taxes not to mention a free ride on property taxes on into the future.

Balfour had made an all-out attempt last year to get the Florida Legislature to grant a full exemption from ad valorem taxes.  Representative Holly Raschein had proposed a compromise that would exempt only those units that housed active duty military personnel and their families.   [In Key West a significant percentage of the housing is rented to non active duty tenants.] The ‘Raschein amendment’ was accepted by both the Florida House and Senate, but was vetoed by Governor Scott who favored a full exemption.

Apparently, this renewed attempt is a more stealth approach.  Proposed language, mimicking last year’s original bill for a full tax exemption to all privatized military housing in Florida, has been placed in the hands of Florida’s Office of Economic and Democratic Research [EDR] and was on their agenda for today [Friday March 28, 2014].  The EDR conducts Revenue Estimating Impact Conferences that are held periodically prior to, during, and subsequent to each legislative session to assess the impact of pending and passed legislation.

We contacted the office of State Representative Holly Raschein who investigated the matter immediately late yesterday.  Representative Raschein’s assistant Kate DeLoach told The Blue Paper her office had just been informed that the item has now been removed from the agenda.

John Dent, attorney for the Monroe County Property appraiser, told The Blue Paper that there is some risk that the tax exemption language could be piggy-backed onto another bill and ultimately be approved without anyone paying much attention to it.  DeLoach informed us that Representative Raschein plans to watch this issue very closely.

In the meantime, other Counties in Florida are following Monroe County’s lead in requiring privatized military housing contractors to pay ad valorem taxes.  In 2013 Florida’s Escambia County began taxing another of Balfour Beatty Communities housing complexes at the naval air station there.  Escambia’s property appraiser had denied BBC’s application for exemption and the company’s appeal to the Value Adjustment Board was also denied.  Balfour has refused to pay and recently filed a suit similar to the one pending in Monroe County.

Dent points out that if an exemption does make it through the legislature Monroe County taxing authorities would be required to refund over a million dollars in taxes that were paid when Peary Court was sold last year.  The City of Key West’s slice of that was $ 579,000.

According to Dent, passage of such a law would grant to profitable entities a tax break that is unjustified.  “In their proposal to the US Government they were required to assure that those taxes would be paid.  This would just be a windfall for profit making companies.  I don’t know how the legislature could even consider it.”