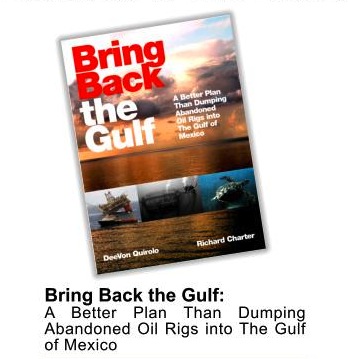 Anyone who thinks co-founder of Reef Relief, DeeVon Quirolo, may have toned down her efforts to protect our oceans since leaving the Keys and Reef Relief behind back in 2009 – well – think again.

Bring Back the Gulf  is a timely analysis of the scientific, environmental, legal, social and political aspects of the U.S. Interior Department’s “Rigs-to-Reefs” program and is now available as an e-Book at www.bringbackthegulf.org, the story of how Big Oil decided to fool the American taxpayer, and why their complicated scheme is not in the public interest.

Current policy allows the oil industry to send its trash to the ocean bottom and call it a reef. Taxpayers are footing the bill for this giveaway that is compromising our Gulf of Mexico’s public natural resources. Rigs-to- Reefs is a clever name for a waiver that sidesteps a requirement that each offshore oil lease includes full decommissioning of spent oil and gas structures to restore the seabed to its previous natural state. Authors DeeVon Quirolo and Richard Charter assert that each oil lease should be enforced to, put simply, force oil companies to properly clean up after themselves when they’re done with a rig.

“When an oil company signs an offshore oil lease contract, that includes an obligation to return the seabed to its natural state once the rig has reached the end of its economic life,” said co-author Richard Charter, senior fellow with The Ocean Foundation. “Americans have every right to expect that the company will keep its promise. With thousands of rigs due for decommissioning in the next few years, we can either decide to help restore the Gulf of Mexico to its former vitality, or allow it to become a junkyard of epic proportions.”

“Dumping spent drilling rigs into the Gulf of Mexico has unanticipated long term negative consequences on marine resources and fails to support fishery management goals,” added co-author DeeVon Quirolo. “If anything, discarded rigs simply cause fish to aggregate so that they are over-harvested, and help invasive species to spread.”

“Shrimp fishermen need trawlable bottom in the Gulf to run their nets,” said Clint Guidry, president of the Louisiana Shrimp Association. “Further giveaways of ocean bottom are not in line with long-standing agreements we have made with the oil industry and State and Federal Government.”

In a letter to Secretary Sally Jewel, leading Gulf of Mexico stakeholders call on the Interior Department to halt issuing waivers that enable spent rigs to remain on the ocean bottom and instead require the seabed to be restored to its original condition as required under the Idle Iron policy. Additional recommendations include:

· Independent scientific research that is not unduly influenced by the oil and gas industry, especially for deep-sea processes that are vulnerable to impacts accompanying the growth of deepwater drilling

· Support effective management of all fisheries for long-term, ecosystem-based resilience and sustainability

Today, some rigs are granted waivers to become permanent fixtures on the ocean floor, towed to state-established so-called “reefing sites.” Full responsibility for future maintenance and liability is then shifted to the state, in exchange for a one-time payoff from the rig owner equal to half of the savings over the cost of full decommissioning. This obviously saves the oil industry millions of dollars, but is counter to supporting larger Gulf of Mexico restoration or fisheries management goals.

Past seafloor discards have led to creation of the largest underwater artificial habitat in the world in Gulf waters at present. Ocean disposal in this manner is heavily promoted by the oil industry as an environmentally friendly option when in fact the reverse is actually true. Studies show that the rigs fail to equal or rival natural coral reefs in biologic diversity and instead attract fouling organisms, including bivalves, sponges, barnacles, hydroids and algae as well as non-native invasive species.

There is new urgency to prevent navigational hazards posed to vessel traffic when these massive structures become lost or damaged during major storms and hurricanes. The Interior Secretary Sally Jewell’s Chief of Staff Tommy Beaudreau recently announced that the agency will review policies regarding decommissioning and related liability issues beginning this summer. 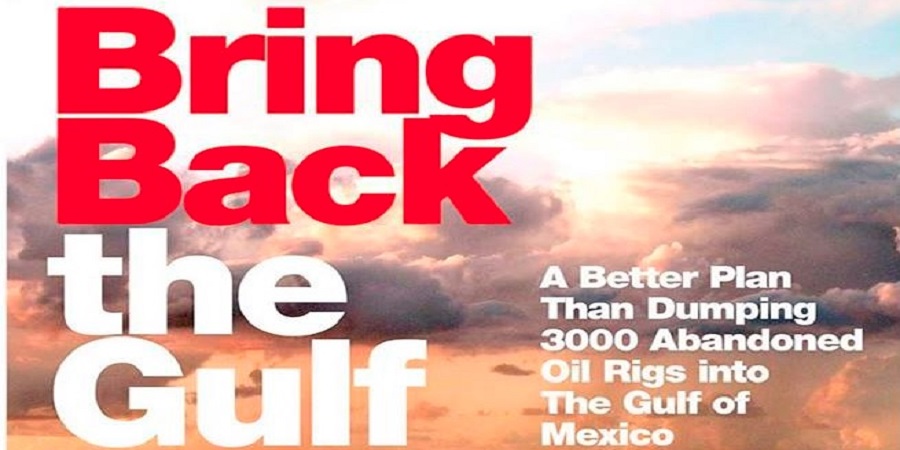