The long awaited Balfour Beatty trial was expedited in less than two days this week.  Lawyers battled over technicalities concerning $ 11.3 Million in property tax liens that Balfour Beatty refuses to pay off.  BB protested during the trial, claiming that it would be impossible to provide proper services to military families and pay property taxes because of the downed economy.  “Are you here to claim,” asked John Dent, attorney for the Monroe County Property Appraiser, “that because the economy is not as good you should get an exemption?”

The real issue is this:  On paper Balfour Beatty’s LLC (Southeast Housing) is the owner of those 900 or so housing units that owe $ 11.3 Million in tax liens, but it claims that this is only some sort of make believe ownership and the real owner, the “beneficial owner” is not the for-profit LLC but the Navy.  And since the Navy is, by law, tax exempt, the LLC cannot be taxed if the Navy has in fact retained all of the benefits normally associated with ownership.  The Navy (says BB) gets 90% of the profits, receives better service for its sailors and their families, and the houses will be returned to the Navy in 50 years.

However, as we all know here in Key West, Balfour’s LLC has already sold and pocketed to its exclusive profit, a considerable part of that real estate.  Did it not just sell Peary Court including 160 of those units?  So, who knows what will be left in 50 years?  Shouldn’t “equitable ownership” be determined as a matter of fact in each given year?

Let us review what we know about who has been the true “beneficial owner” in this public/private venture since 2007.

Far short of receiving 90% of the profits, as BB is claiming, the Navy, in fact, had to bailout the company at a cost of $ 8.4 Million in cash in 2011. The Navy also had to accept large cuts in the number of houses BB was meant to build. According to documents provided by the Navy, at NAS Key West the re-scoping created a loss of $ 8.1 Million in renovations and required holding off on 450 renovations.

A report by Moody’s, the securities analyst, states that BB paid itself way too much money for demolitions.  (Arguably an area where one can make a considerable profit).

Whether or not the sale of Navy real estate was going to benefit the Navy was seriously put in question by base commanders:  “I fully understand the debt and revenue issues with NAS Whiting Field,” said the CO, “but the way ahead on how to mitigate appears to be a quick fix, where the ability to realize more revenue in the future will be severely impacted.  Short-term gain for a long-term pain.” Meaning, the diminishing stock of units will correspond to a loss of revenue, which will make servicing the debt more difficult [and might in turn require yet more sales].

One way to see the partnership is that, rather than the Navy retaining an equitable ownership in the buildings it conveyed, it may slowly be bled of all its real estate to satisfy the appetite of its private partner.

So can we at least agree with BB that the military service members are truly benefitting from this public private partnership?

Not according to the base commanders:

“It appears,” wrote Captain Edward Brown, CO of the Gulfport base, “that the option of selling our finest and newest housing for cents on the dollar is designed to raise fast cash…  I’m left with a declining quality level in addition to the morale issue of moving folks back into the very units they’ve recently vacated due to dissatisfaction with the quality level.”

In Key West, CO Captain Holmes wrote, “it looks like a bailout on the backs of our military families… the bottom line is that I think the military members are going to continue to get the short end of the stick in this deal when the entire project was put together to improve quality of life in our housing areas… Key West had the lowest satisfaction rating and it’s due to a lack of communication and a lack of improvement in housing despite what was shown / “promised” when they took over.”

One of the chief grievances was that BB charges more rent to military families than to civilian families. The NAS Key West base commander wrote, “At Key West, where I already have over 200 affiliated civilians in PPV (Public Private Venture), I am concerned that BBC makes substantial concessions to civilian rent rates without corresponding reduction for military.”  During the trial on Thursday it was revealed that BB charges some civilian tenants 33% less rent than military families.

The issue has gotten pretty controversial:  it appears BB may have intended to cover up the true ratio of military versus civilian tenants at NAS Key West.  The Blue Paper obtained documents sent to the Governor’s office just prior to his veto of the bill that would have exempted only those units housing active military personnel.   One document appears to show that BB doctored the number of civilian tenants by removing 215 of them from the 2012 head count.  NAS Key West spokesperson Trice Denny indicated that no such drop in civilian occupancy took place.

Military Families are on the losing end of the deal for other reasons.  The National Military Family Association (NMFA) complained that overcrowding and underfunding in schools around military bases makes a poor lot for military children.  Military children, in most cases, will spend their school years bouncing (due to parent reassignments) from one substandard school to the next.

According to Jocelyn Bissonnette of the National Association of Federally Impacted Schools (NAFIS) in Washington D.C., Monroe County was slated to get $ 1.8 Million in federal impact aid to help defray costs of educating federally connected students last year.   What the district ended up getting was less than $ 240,000.   This year the budgeting discrepancy is expected to be even greater.

The school tax deficiency was one of the issues that privatization of military housing was meant to resolve.  “One Navy Housing plan,” said Rame Henstreet, commanding officer of the Naval Facilities Engineering Command Midwest (to The Chicago Tribune in 2005), “includes a way to generate property taxes for communities and schools by allowing a developer to replace the homes, then lease them back to the military.  The home would be taxable, but not the land, which would still belong to the military.”  However, since BB, the “developer”, reneged on paying property taxes that benefit to Navy children was also lost.

What About BB’s Beneficial Ownership?

As to BB’s benefit from the operation, we learned at the trial that BB invested only $ 7.5 Million in the venture.  In exchange, it’s LLC received hundreds of millions of dollars worth of property (Peary Court alone sold for $35 Million). In 2007, backed by US Navy credit, the company borrowed over $ 500 Million which it immediately proceeded to pay to itself for construction costs (part of it was apparently wasted in excessive demolition costs).  Just two years into the deal, in 2009, it claimed to be on the edge of bankruptcy and squeezed another $ 8.4 Million in cash from the Navy.  It also had the Navy agree to sell a number of newly renovated houses, which, as said earlier, Navy families were forced to evacuate, moving back into old dilapidated units.

BB had a few other arguments at trial, most of which seemed to have very little chance of success but did shine a light on one particular mystery:  How did the company manage to fly under the radar for 5 years?

The Monroe County Tax Appraiser’s office has been dogged by the issue of a May 2007 letter signed by Karl Borglum, then assistant tax appraiser, agreeing with BB that the Key West properties would be tax exempt.  The problem, says the Appraiser’s attorney, John Dent, is that the letter does not constitute a valid tax exemption:  BB was not even the owner at the time and the law requires a special form and process for a valid tax exemption application.

For five years BB’s lawyers never sought an official exemption, which would have carried the risk of being reviewed and denied.  Rather, they let sleepy dogs lie, silently getting away with not paying property taxes.  It became comical at the trial where nearly every witness was himself a lawyer yet each proclaimed his lack of knowledge on the basis that he had only followed the advice of counsel.

BB also claimed to believe the housing units were located on exclusive federal jurisdiction land (which would have made the homes exempt as they would not be considered to be within the sate of Florida.) That is actually the argument BB’s lawyers presented when an investigation, by this paper mind you, blew the whistle on the tax issue on April 27, 2012. 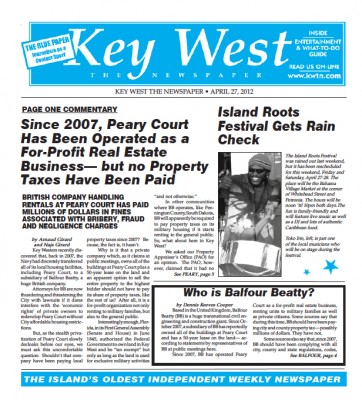 The question of Federal v State jurisdiction appeared at first to contain so many historical intricacies that it would never be resolved.  Worse, Borglum declared at the time that he was relying on BB’s lawyers to produce the proper documents concerning jurisdiction. The reader might remember that by some strange twist of fate, the Blue Paper found a tip – from famous actor Wesley Snipes’ tax advisor, Eddie Ray Kahn. Both Snipes and Kahn served time in jail for tax evasion and Kahn knew exactly how to unravel the complicated mysteries of federal vs state tax jurisdiction in Key West.  Before long we provided Karl Borglum with proof that none of the Navy housing properties in Key West were in a federal enclave and Borglum dropped an $ 11.3 Million back tax lien on BB’s doorstep.

BB’s Key West housing stock is not in exclusive federal jurisdiction, but it clearly is in the state of Florida. It is titled to a private corporation which favors civilians with cheaper rent and receives sailors’ Basic Allowance for Housing (BAH) which Congress restricted to private landlords.  BB has used the housing properties to borrow and pay itself hundreds of millions of dollars and seems to be able to sell whatever it wants on the open market without paying back anything to the Navy.  Whether or not that company should have to pay property taxes is what Judge Audlin must now decide.

The United States Navy is a non-managing member of Southeast Housing LLC.  According to the Operating Agreement that governs the “project entity” (Souteast Housing LLC) the Managing Member (Balfour) maintains “sole and exclusive control” of the LLC.  The United States Navy has not taken a public position on the taxability of the units of housing owned by Southeast Housing LLC.  In a letter responding to Congressman Joe Garcia, dated April 19, 2013, the Department of the Navy wrote: