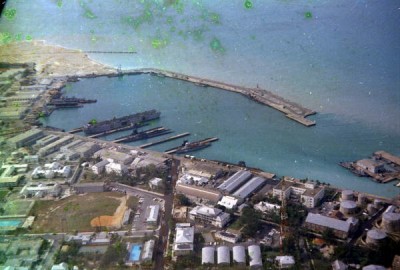 The United States Navy came to Key West in 1823.  At the time, Key West was a remote outpost in Florida, at first a Territory of the United States established in 1822, and in 1845 admitted as the 27th state of the U.S.

During the period from 1823 until the beginning of the United States Civil War in 1860, the Navy maintained a continuous presence in Key West, pursuing marauding pirates and maintaining control over shipping lanes between ports on the Atlantic seaboard and in the Gulf of Mexico.  Although Florida seceded from the United States and joined the Confederate States of America for the duration of the war, the Union government continued to control ports and sea lanes.

Once again, during World War I (1914-1918), the Navy expanded the Naval Base and built a submarine base (and an anti-submarine contingent) that was located in what is now the Truman Waterfront area.

After World War I, the base was decommissioned and its personnel were transferred or released. Most of the buildings were destroyed or dismantled and moved to other locations. The remaining facilities were used only occasionally during 1920–1930 for seaplane training. The station remained inactive until 1939.

Naval Base Key West was reopened just prior to the United States’ entry into World War II to support Navy destroyers, submarines, patrol craft and PBY flying boat and amphibious aircraft. Other satellite facilities were established to support other war efforts, including Meachum Field for lighter-than-air blimp operations on Key West, and runways for land-based and carrier-based aircraft on Boca Chica Key.

In 1942 the United States acquired full title to the Truman Annex parcel for the purpose of enlarging the Key West Naval Base.  In the years that followed, the so-called Navy Yard employed thousands of Key Westers and hosted a complement of Navy organizations on land that extended from Front Street to South Street and that was bounded by Southard Street and the Atlantic Ocean.

In 1987, following a period during which the City oversaw the now largely idle Navy property, the Truman Annex Parcel was sold to developer Pritam Singh for $17M.  The Navy retained the remainder of the Truman Waterfront until 2002, when 33 additional acres were conveyed to the City of Key West.  The remaining 17 acres were retained by the Navy and are used today as headquarters of JIATF-South.

PART II, to be published next week, will trace the troubled history of the time leading up to the Base Realignment and Closing (BRAC) process, the transfer of ownership of the waterfront to the City, and the events that led to the City’s grab of more than half the 6.6 acres that were committed to the benefit of Bahama Village.

Bob Kelly is a retired computer company executive who moved to Key West in 1999 with his wife Janet.  They live aboard a houseboat at City Marina at Garrison Bight.  He is an early graduate from the city Ambassador program.  He was a member of the board of directors of the Bahama Conch Community Land Trust and also the Bahama Village Music Program.  He also served briefly on the Truman Waterfront Advisory Board before being removed on a technicality.

3 Responses to “A BRIEF HISTORY OF TRUMAN ANNEX”