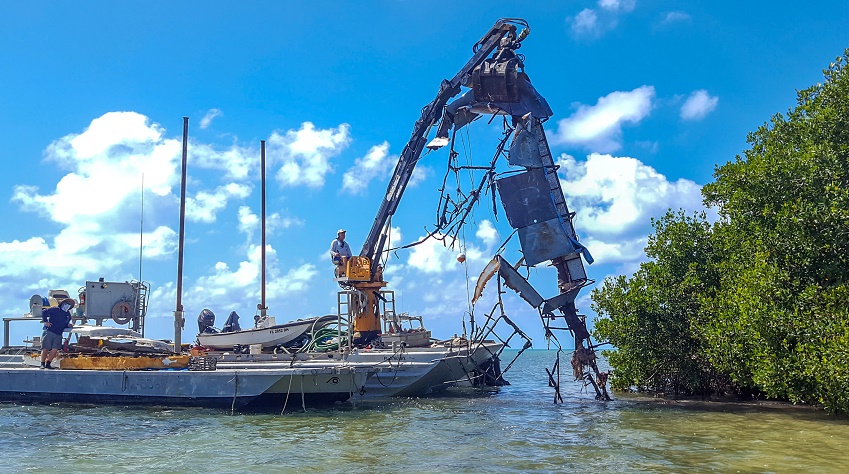 The 18-foot, steel-hulled derelct vessel was removed from the mangroves as part of a Monroe County-led project to restore the Marquesas Keys back to its original pristine condition.

MARQUESAS KEYS, FL – A multi-agency project to remove 31 abandoned and derelict vessels from the remote Marquesas Keys was completed Friday, March 31, just in time for the start of bird and turtle nesting seasons.

Monroe County’s Marine Resources Office led the $61,200 effort that restored shoreline and nearshore habitats in the Marquesas Keys – a group of islands located about 17 nautical miles west of Key West and within the Florida Keys National Marine Sanctuary and the Key West National Wildlife Refuge. These islands have been a historic landing spot for Cuban migrant rafters, who leave behind their rustic vessels known as “chugs” that contain batteries, fuel, oil, polystyrene foam, plastic and other hazardous materials.

The work began March 12, after more than a year of planning and obtaining permits. Several days of high winds and rough seas delayed operations, but the project’s contractor, Coffin Marine Services of Big Pine Key, was able to finish by the April 1 deadline.

“Despite a tight deadline and adverse weather, Coffin Marine Services did a great job to execute this complicated project that was geographically, logistically and environmentally challenging,” said Rich Jones, Senior Administrator for the Monroe County Marine Resources Office.

A sunken 25-foot, blue-and-white former Cuban fishing boat called “Mariel” was the last boat removed. Like many of the abandoned vessels, it was impacting the seabed and mangroves, and contained hazardous material.

“We left the most difficult for last,” said John Coffin, owner of Coffin Marine Services. “It was super heavy, had a Detroit diesel engine in it, and was sunk and punctured. I knew we would probably need a whole tide cycle to get it out.”

To do the work in the sensitive, shallow waters, a 60-foot, flat-bottom barge was used. Coffin created it from a 36-foot World War II-era attack troop carrier, which was designed to go 60 mph and storm beaches with soldiers aboard.

On the barge, Coffin installed a hand-like claw that is able to pick up heavy loads and reach several yards out in all directions. For the project, Coffin removed 31 boats, ranging in size from 18 to 25 feet and spread over six islands. (A 32nd boat originally identified for the project already had been removed).

The project’s work could only be done at high tide and was overseen by the various agencies to ensure “best management practices” were followed. Coffin said the hazardous materials removed included 25 diesel engines and 60 gallons of fuel, oil, antifreeze and “suspicious” liquids found in jugs. 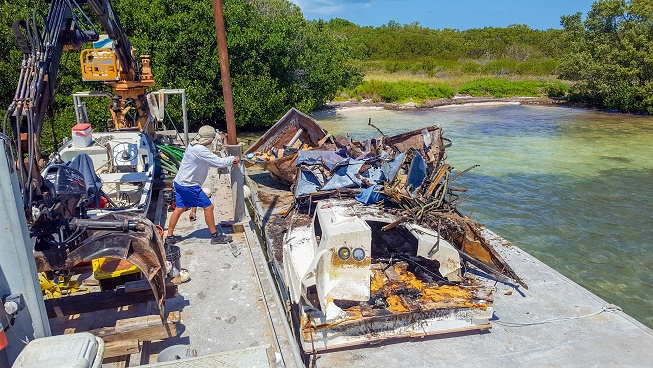 John Coffin, owner of Coffn Marine Services, secures the mangled pieces of derelict and abandoned vessels during a project to remove 31 of them from the Marquesas Keys.

Monroe County removes about 80 derelict vessels each year from Sanctuary waters, but this is the County’s first removal project in the Marquesas Keys. It required coordination with the Florida Keys National Marine Sanctuary, the United States Fish and Wildlife Service that oversees the Refuge, the Florida Fish and Wildlife Conservation Commission’s Division of Law Enforcement, the Florida Department of Environmental Protection’s Florida Coastal Office and the U.S. Coast Guard. Meteorologists at the National Weather Service’s Key West office provided important daily weather reports.

“The Marquesas chug removal project is an example of the value of government agencies coordinating and working together,” said Ed Lindelof, Acting Superintendent of the Florida Keys National Marine Sanctuary. “We had county, state and federal agencies all doing their part in a concerted effort to remove derelict vessels that posed threats to a nearly pristine environment. This project eliminated pollution and hazardous material like batteries, fuel, plastics and polystyrene from sensitive bird and turtle nesting beaches and marine habitat in the Marquesas.”

Daniel Clark, Refuge Manager for the Florida Keys National Wildlife Refuges Complex, said the inter-agency coordination and cooperation to accomplish this project has been a “model for future conservation operations in the Keys.”

“We leveraged each partner’s skills and abilities to plan and implement a great project that can be used again in the future if needed and finish one that benefits wildlife and habitats in the Key West National Wildlife Refuge,” Clark said.

The project is being paid for using Monroe County Boating Improvement Funds, which are generated from recreational vessel registration fees, and Sanctuary Damage Assessment and Restoration Revolving Funds, which are recovered from incidents involving injuries to Sanctuary resources.